All 50 states are easing COVID-19-releated restrictions on businesses, including fitness studios. If you’ve been cooped up for weeks, developing a one-sided bond with Adrien from Yoga with Adrien and really feeling the rigidity of your home’s hardwood floor against your ass while doing spine twists, you might be tempted to line up, mat in hand, the first day your yoga studio reopens.

As with all elements of post-coronavirus life, things will be different. Specialty fitness studio dedicated to disciplines like yoga, Pilates, martial arts, and rock climbing are making radical adjustments to curb the spread of the virus. Expect half-empty rooms, rules on physical distancing, and an end of walk-in classes and some shared equipment. Fitness studio owners say they will enforce face masks if their local public health authority mandates them, but they may not require them if they’re cumbersome to the particular exercise. Temperature checks at the door are a maybe. Hand sanitizer dispensers everywhere are a given.

Crowded, sweaty rooms we once entered without a care are 2019. Spaced out, disinfected spaces ruled by occupancy, efficiency, and cleanliness are 2020.

Also a thing of the past are lounges where regulars hang out after class. “It’s a loss,” said Jesse York, co-owner of the Title Boxing Club in Knoxville. “We are definitely southern people and southern people like to talk.” However, he is asking that once students are done pounding their assigned punching bags and class is over, people file out quickly, one row to the left of the fitness floor and one to the right.

“If you are going hard, then you are propelling those droplets everywhere.”

To review the risks to fitness spaces and their clientele remember that, as a respiratory illness, COVID-19 is spread when an infected person releases droplets through their mouth or nose, through breathing or speaking. Another person consumes them through swallowing or inhalation, or when they touch the virus and then touch their eyes, nose, or mouth. The more people in a space the greater the risk of a person who is, perhaps unknowingly, transmitting the virus, and the more time spent there the greater the risk of exposure. Also, heavy breathing from rigorous exercise can launch droplets further than the six feet of space that’s become a norm of social distancing.

“[I]f you are going hard, then you are propelling those droplets everywhere,” Alan Schenkel, PhD, a virologist at Colorado State University says. “I would urge people to be very wary and very cautious.”

Fortunately for gyms, sweat is not thought to be conduit for the virus—but surfaces still need to be disinfected regularly, since the virus-carrying droplets can settle onto them. Combine all these factors and experts are hesitant about returning to fitness studios.

“I take Pilates and people also use controlled breathing practices,” said Zandrea Ambrose, PhD, a virologist at the University of Pittsburgh. “I have no intention of going back to my Pilates studio any time soon!”

Schenkel agrees. “I would not do it myself,” he said. “I bike past the gyms and see people on stair machines and lifting weights and I think, ‘They are taking a lot of risks.’” Instead, he recommends outdoor exercise. Very few cases of COVID-19 were traced to transition in an outdoor space, he says.

If you go back to your specialty fitness studio anytime soon, here are some new precautions, regulations and changes to the atmospheres you may encounter. 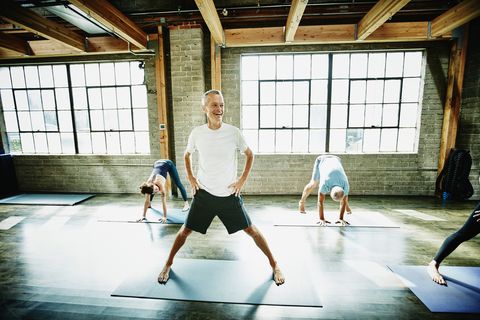 Once-crowded yoga rooms will operate at about one fourth of their pre-COVID capacity as businesses adjust for social distancing. Kendra Blackett-Dibinga, owner of Bikram Yoga Works, which has studios in Boston and the D.C. metro area, said that once rows of yoga mats are set six feet apart, she expects to fit 20 people into rooms that once held 60 or 70.

The Yoga Alliance suggests restricting the use of studio-owned props, like mats and blocks. Some studios may require clients to bring their own. The Alliance’s best practices list also includes setting aside more time between classes for disinfecting surfaces and mandatory face masks.

Blackett-Dibinga said she won’t make her pupils wear masks. “People need to be able to take a breath,” she says. Particularly in her “hot yoga” studios, she thinks a face mask may dangerously restrict airflow.

One element that also might be missing from yoga class: a flesh-and-blood teacher. To keep instructors from continually moving between locations, Blackett-Dibinga said some will lead via live video link.

These factors might not be great for attracting casual yogis, and the studios, already reeling from weeks of being shuttered, will face financial hardships as they can only serve a fraction of the students who used to clutter weekend and 6 p.m. classes. “It will be a challenge unless our landlords can say they will work with us,” Blackett-Dibinga said. “We may cut down a location or two. We are looking for the model that works.” 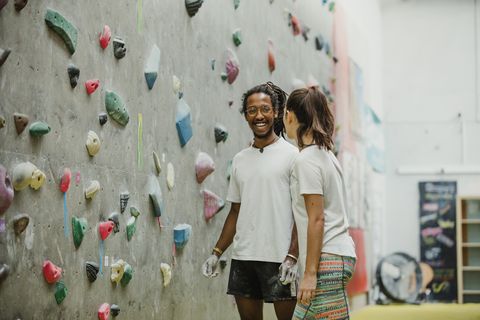 There are few places more difficult to disinfect than a climbing gym. Every wall and structure is meant to be touched. Oils from clinging hands are thought to be a poor conduit for COVID-19—but climbers release water droplets as they breath, huffing inches from the wall as they struggle to grasp the next hold. And those holds—as the shapes that climbers grip are called—are made from porous plastics. That makes them easier to clutch, but they absorb liquids more readily. Some of the holds would be extremely hard for a cleaner to reach. After all, being hard-to-reach is often the point.

“There is no real history of disinfecting climbs,” said Tyler Norton, a video-blogger for the climbing YouTube channel Plastic Weekly and manager at Up The Bloc and Joe Rockhead’s, a pair of climbing gyms in Ontario. “They will go untouched for months.”

In online forums, climbing gym owners have talked about options like ultraviolet light and a fumigation spray, but cleaning such a space thoroughly and regularly is largely unfeasible. So expect greater requirements on climbers to curtail the spread of pathogens themselves. Some reopened climbing gyms are requiring that climbers wear masks and pass a temperature check at the door. Some are requiring liquid chalk, instead of dust, because it contains sanitizing alcohol.

Norton said to expect fewer people and fewer climbs. His gyms are eliminating half their tracks to create distance between climbers. He said others in the industry are doing the same.

Norton’s gyms also plan to limit entry to members initially. Teaching people the ins and outs of climbing usually entails more physical proximity than they can currently manage. Also, members usually have their own chalk bags and harnesses, and some gyms are not renting those out. Shoes, which are typically disinfected after every use, are feasible.

Notably, drops-ins are done. Members will have to call ahead and arrange a time. “All the gyms that are open are starting to see complaints about that,” said Norton. “No one wants to have to sign up two days in advance.” 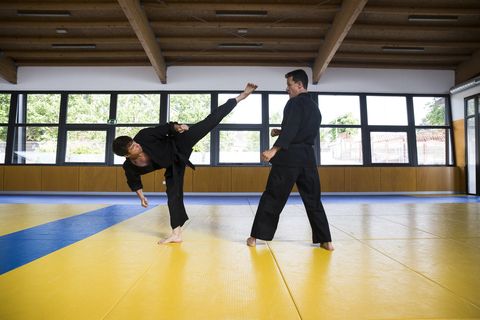 In many martial arts, close contact with another person is part of the exercise. For judo, jujitsu, tae kwon do, and boxing, sparring or matches are out of the question. Even the shout of “kiai!” that begins a match of one of the Japanese martial arts is a forceful exhale of spit.

“Martial arts or any other contact [or] collision sport is going to be hard to do now without constant testing,” said Ambrose, the University of Pittsburgh virologist, “likely unavailable outside of national sports leagues.”

Some martial arts studios that have reopened have had students practice on dummies.

York, of the Title Boxing Club in Knoxville, said he is ceasing mixed martial arts classes. But he says his core business of boxing is uniquely adaptable to the post-COVID reality. “You put your hand in the boxing gloves and then your hand doesn’t touch anything else,” says York, “and that glove touches nothing but the bag.” Sparring, he says, has always a small part of his boxing classes.

Classes will, of course, be at reduced capacity, from a maximum of 40 students before to 20 now. Students will only work on an assigned a bag, while borrowed gloves will be placed in an ozone purifying locker after use. 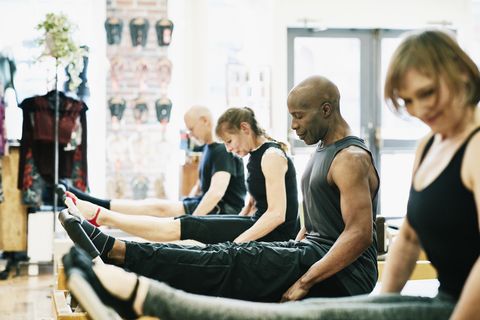 While some exercises are done with just a mat, Pilates studios are filled with specialty equipment for resistance and pose assistance, including Reformers, Pilates chairs, barrels, and towers. Some studios are spacing such equipment six feet apart.

Her studio, Tensile Strength Studio and Barrington Yoga Loft in the suburbs of Chicago, is open only for one-on-one instruction. Instructors stand ten feet away from clients, or six feet, if they stay behind stalls of Plexiglas Graser had installed. For Graser, this stage of reopening is about reconnecting with dedicated clients. 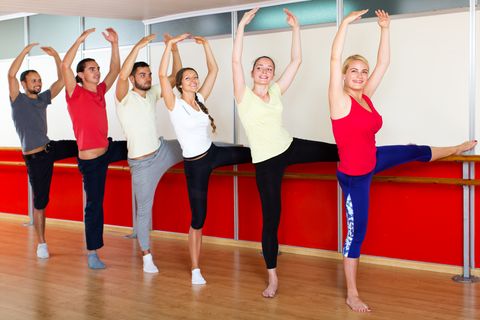 Barre is an exercise routine that utilizes movements from ballet to build strength and flexibility. Fred DeVito, one of the co-founders of the Exhale chain of fitness studios and a barre instructor, said that practitioners at their clubs will be required to wear masks and disposable plastic gloves. To prevent moving around and spreading their breath, instructors will stay in one place and use a megaphone.

Also, students will be assigned a dot in the studio, distanced six feet from others, and run through their exercises at the assigned spot, which will put each studio at about half capacity.

“Before they would wander and be anywhere,” DeVito says. “They would be wall to wall.”

Of course, those were different times.

Where to buy cheap stromectol best price no prescription