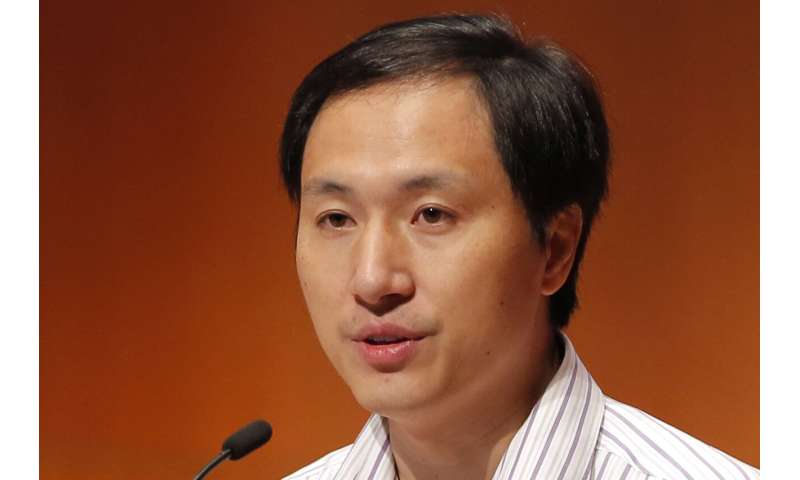 Chinese scientist He Jiankui shocked the world by claiming he had helped make the first gene-edited babies. One year later, mystery surrounds his fate as well as theirs.

He has not been seen publicly since January, his work has not been published and nothing is known about the health of the babies.

“That’s the story—it’s all cloaked in secrecy, which is not productive for the advance of understanding,” said Stanford bioethicist Dr. William Hurlbut.

He talked with Hurlbut many times before He revealed at a Hong Kong science conference that he had used a tool called CRISPR to alter a gene in embryos to try to help them resist infection with the AIDS virus. The work, which He discussed in exclusive interviews with The Associated Press, was denounced as medically unnecessary and unethical because of possible harm to other genes and because the DNA changes can pass to future generations.

Since then, many people have called for regulations or a moratorium on similar work, but committees have bogged down over who should set standards and how to enforce them.

“Nothing has changed,” said Dr. Kiran Musunuru, a University of Pennsylvania geneticist who just published a book about gene editing and the CRISPR babies case.

“I think we’re farther from governing this” now than a year ago, said Hurlbut, who disapproves of what He did. However, so much effort has focused on demonizing He that it has distracted from how to move forward, he said.

Here’s what’s known about the situation:

He was last seen in early January in Shenzhen, on the balcony of an apartment at his university, which fired him from its faculty after his work became known. Armed guards were in the hall, leading to speculation he was under house arrest.

A few weeks later, China’s official news agency said an investigation had determined that He acted alone out of a desire for fame and would be punished for any violations of law.

Since then, AP’s efforts to reach him have been unsuccessful. Ryan Ferrell, a media relations person He hired, declined to comment. Ferrell previously said He’s wife had started paying him, which might mean that He is no longer in a position to do that himself.

Hurlbut, who had been in touch with He early this year, declined to say when he last heard from him.

The Chinese investigation seemed to confirm the existence of twin girls whose DNA He said he altered. The report said the twins and people involved in a second pregnancy using a gene-edited embryo would be monitored by government health departments. Nothing has been revealed about the third baby, which should have been born from that second pregnancy in late summer.

“He caused unintended consequences in these twins,” Musunuru said of the gene editing. “We don’t know if it’s harming the kids.”

OTHERS WHO WERE INVOLVED

Rice University in Houston said it is still investigating the role of Michael Deem, whose name was on a paper He sent to a journal and who spoke with the AP about He’s work. Deem was He’s adviser when He attended Rice years ago.

The AP and others have reported on additional scientists in the U.S. and China who knew or strongly suspected what He was doing.

“Many people knew, many people encouraged him. He did not do this in a corner,” Hurlbut said.

Scientists recently have found new ways to alter genes that may be safer than CRISPR. Gene editing also is being tested against diseases in children and adults, which is not controversial because those changes don’t pass to future generations. Some scientists think gene editing will become more widely accepted if it’s proved to work in those situations.

A forum was held in Berkeley, California, last month to get public views on gene editing—everything from modifying mosquitoes and crops to altering embryos.

The National Academy of Sciences recently pulled a video it made after concern arose about how it portrayed the ethically dicey science and its possible use to make designer babies. The academy has been leading some efforts to set standards for gene editing, and it gets most of its funding from the government, although a private grant paid for the video, a spokeswoman said.

An AP/NORC poll last year found that most Americans say it would be OK to use gene-editing to protect babies against disease, but not to change DNA so children are born smarter, faster or taller.

A moratorium is no longer strong enough, and regulation is needed, CRISPR pioneer Jennifer Doudna of the University of California, Berkeley recently wrote in a commentary in the journal Science.

She noted that the World Health Organization has asked regulators in all countries not to allow such experiments, and that a Russian scientist recently proposed one.

At night he wanders suddenly around

Stiftung Warentest advises against the use of combination preparations