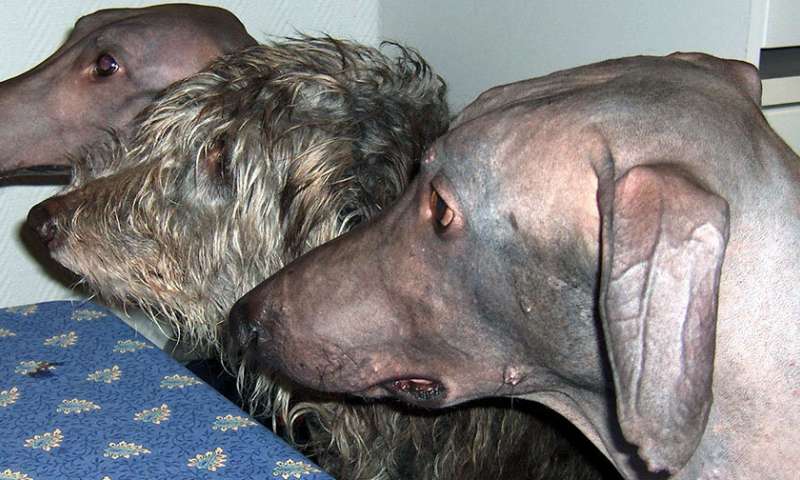 Hairlessness in dogs can be the result of deliberate breeding or, in certain breeds, a defect. A recent study completed at the University of Helsinki describes a gene variant in the SGK3 gene, which causes hairlessness in Scottish Deerhounds. The gene defect results in puppies born with thin fur that lose all of their hair in a few weeks. SGK3 is also a candidate for association with non-hormonal baldness in humans.

The quality of dog fur has been a significant target of breeding, which is why the trait varies greatly between breeds. As a result of selective breeding, gene variants that influence coat quality have accumulated in different dog breeds, making their coat either short or long, straight or curly, or entirely hairless. Hairlessness may also be associated with harmful features, such as the absence of teeth and dental malformation. Currently, a handful of genes have been linked with canine hairlessness. Of these, variants in the FOXI3 and SGK3 genes are associated with hairlessness maintained as a breed trait.

“Normally, Scottish Deerhound have coarse, longish hair, but every now and then there are hairless individuals in litters. We found that hair loss is connected to the SGK3 gene, but to a variant different from that identified earlier in another breed. However, the end results are similar, as the puppies are born with sparse coats and lose all their hair in a matter of weeks. No other significant disabilities yet seem to be associated with the functional disturbance of the SGK3 gene,” explains University Researcher Marjo Hytönen, Ph.D., from the University of Helsinki.

SGK3 codes for an enzyme that affects the regular hair cycle, the exact mechanisms of which are yet to be determined. Studying dogs that are hairless due to a dysfunction in the SGK3 protein may help find out the details. Another variant of the SGK3 gene has previously been associated with the hairlessness of the American Hairless Terrier, a desired trait in that breed.

The Best Ways to Maximize Small Shower Spaces, According to Interior Designers and Organizing Experts

Coronavirus: Why the fear is so great