We get it, feeding kids is a touchy subject from day one. Breast or bottle? Eat at the table or while watching a tablet? To snack, or not to snack? Well, the latest dinner debate came from one dad on Reddit who has been battling it out with his ex when it comes to portion sizes.

“My 9-year-old son has started to ask for adult meals when taken out for food,” he said in the original post. “For example, he asked for a Big Mac meal when he was last at McDonald’s.”

The dad says he buys his son whatever he asks for. The size and cost don’t bother him (especially since he was eating the same amount at that age), but what does bother him is the way his ex reacts to these decisions. In her mind, a child should be sticking to a Happy Meal size.

“When finding out what I was ordering for our son, she criticized me at length on WhatsApp for it.”

At this point, Redditors were already rolling their eyes. I mean, seriously? We all know a kid who can out-eat us. And why shouldn’t they?

“It’s almost as if they’re growing?!” sighed one commenter. 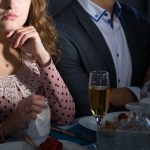 According to dad, he and his ex-wife have always “clashed” when it comes to deciding on portion sizes for their two sons. He never felt his ex-wife gave them enough food.

“They used to often complain about being hungry. The older boy even resorted to smuggling bags of crisps. At the time I didn’t feel able to openly go against my ex as she was known for criticizing me loudly to her friends, and even over social media, if I went against her.”

Well, he certainly has social media on his side now.

“If your child is taking to hiding food, then it is clear your ex is creating an unhealthy environment as it relates to food. Conversations about listening to your body, stopping when you are full, healthy balance of food, etc are important, but at the end of the day, if the kids are otherwise healthy they, should be able to eat whatever amount they need to be full (generally speaking).

But wait — there’s more. The battle of the burgers came to a head this holiday season. Dad had the boys over Christmas and said they had some takeout and other treats. His 5-year-old still requests kids’ meals, but his 9-year-old didn’t leave a scrap of the food offered to him (who could blame him?!) other than some pizza crusts.

Then it came time for the kids to go to Mom’s house.

“I hadn’t even got back to my home when I got a ping on WhatsApp,” he says. “It was my ex, complaining that she’d weighed both boys and they had ‘put on a substantial amount of weight.’”

“Weighing them when they return? That’s toxic af.”

The sea of commenters agreed, saying children shouldn’t have to monitor their weight. The exception is if it’s recommended by their pediatrician, but most docs will probably tell you to stop size-stressing.

“Weighing your kids the minute they get home to see if they gained weight during the holidays is an insane and unhealthy thing to do, and it needs to stop at once,” another commenter said.

Granted, people did want to check in on what exactly dad’s larger portions tend to consist of. Perhaps the content of the meal, not the size, is the real culprit in Mom’s eyes.

“You only mention pizza, McDonald’s, and potato chips/crisps. Was this just a fun vacation time or is that your normal diet? If it’s the norm and not just a fun time, maybe consider modeling a more nutritious and balanced diet when you have them to offset whatever nonsense their other parent is spewing!”

“This is so harmful,” one commenter chimed in. “Does she realize how many parents would kill for their child to eat full portions of adult meals?”

So what’s the supper solution? Many have responded with sympathy, suggesting the mom reach out to a medical professional for eating disorder support. They also say the two should make a joint appointment with the pediatrician and ask for printed appointment notes to take home afterward.

“That way, you can avoid having a fight/debate with your ex and the guidance will be medically sound. At the appointment, I’d ask not only about intake but about the risks of disordered eating and poor body image and how often your sons should be weighed. The emotional concerns are just as valid as the physical ones.”

Here, hear! And so with that, we say to let kids have larger portions of cake (and fruits, and veggies, and bread, and butter), and hope they eat it too!

Before you go, check out these unbelievable stories about Reddit’s worst dads.

Barbie Is So Much Happier Now That She Practices Self-Care

Uh-Oh! Shay Mitchell, Matte Babel Disagree on Birth Plan Ahead of Baby No. 1