“Fetal surgery is not a cure. Damage was done before the surgery, and all they can do is close it up so the damage doesn’t get worse. He’ll have to be monitored for the rest of his life. His outcome is great. But things could change.” 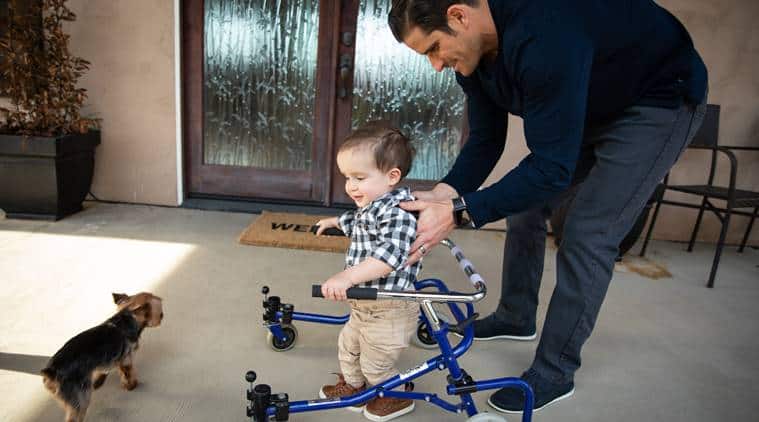 ALPINE, Calif. — Charley Royer, 17 months old, has such a swift, strong kick that putting a pair of pants on him can turn into a wrestling match.

His mother doesn’t mind. Far from it.

“Things that might annoy other parents, I’m so thankful for,” Lexi Royer said.

This child, who crawls around the house chasing a Yorkie named Bruce and proudly hauls himself upright against the couch, wasn’t expected to do any of this. Before he was born, doctors predicted that he would be paralyzed from the waist down. Prenatal testing had found that he had a severe spinal defect and might need breathing and feeding tubes, leg braces, crutches, a wheelchair and lifelong treatment for fluid buildup in his brain.

The condition, spina bifida, occurs when tissue that should enclose and protect the spinal column does not form properly, leaving part of the spine uncovered, with nerves exposed. About 2,000 children a year are born with the disorder in the United States.

Surgery to repair the defect can be performed after a child is born, but the results are often better if it can be accomplished before birth. Because nerve damage is irreversible and accumulates as a pregnancy progresses, closing the spine as early as possible can prevent further injury.

Traditionally, the prenatal surgery has required cutting open the uterus. But Lexi and her husband, Joshuwa, chose an experimental approach: fetoscopic surgery, developed at Texas Children’s Hospital by Dr. Michael A. Belfort, the obstetrician and gynecologist in chief, and Dr. William Whitehead, a pediatric neurosurgeon.

In that operation, described in an article in The New York Times, doctors opened the abdomen and made tiny slits in the uterus to insert a camera and miniature instruments. The camera sent images to a monitor so the surgeons could watch what they were doing.

The operation is not appropriate for every case of spina bifida, but, when feasible, it has two advantages. Not making a big cut in the uterus decreases the odds that the mother will give birth prematurely and need a cesarean. Surgeons at Stanford and Johns Hopkins are also performing fetoscopic surgery for spina bifida in clinical trials.

For the Royers, the experiment paid off. Charley had the surgery in September 2017, as a six-month fetus, and was born full term in January 2018. No cesarean was needed. Charley even flexed his legs in the delivery room.

Most important, the fetal surgery had quickly reversed a dangerous condition in which part of Charley’s brain stem had sunk into his spinal canal, which could have led to physical and cognitive disabilities. 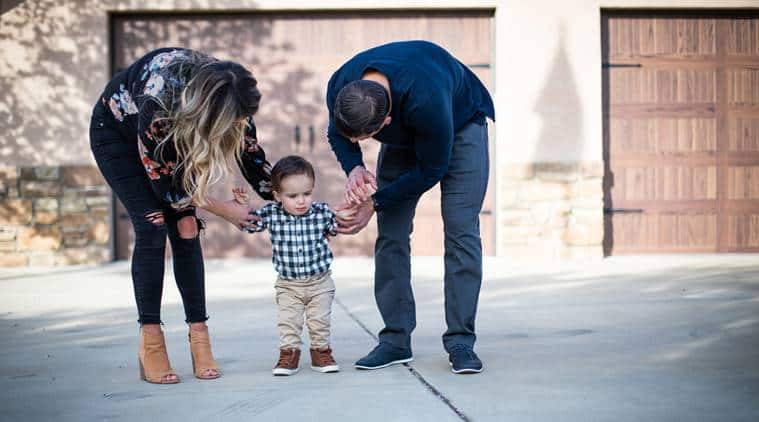 “He’s on track with everything — speech, fine motor, cognitive — except for gross motor, which we expected,” Lexi Royer said.

Charley seems to have had a “big language explosion” recently, she said. He can now name his toys and stuffed animals, and, of course, Bruce.

Sitting in his high chair, Charley likes to fling an arm out, dangling a sippy cup as if about to drop it. “No,” Royer says. He sits defiant, reading her face. She is trying not to laugh. He knows it. “No,” she says again. He waits, letting her know who’s in control. Finally, looking triumphant, he puts the cup back on his tray.

Charley is not walking independently yet, but his doctors and therapists predict that he will, without braces or crutches.

“We expect it to take longer than a typical kid,” Royer said.

Charley seems close, cruising around the house while hanging on to the furniture for balance. Other times he crawls, having recently raised himself up on all fours after months of zipping along in what Royer called his army crawl, using his legs but not fully up on his knees.

He gets physical and occupational therapy every week, and Lexi Royer spends an hour a day working with him on walking. His father built parallel bars out of plastic pipe, and as Charley walks hanging on to those, his parents hand him toys to encourage him to hold the bar with just one hand. His legs were strong enough to bear his weight and let him stand at six months, Lexi Royer said. The first time he walked across a room, holding on to a walker with wheels, he finished by plopping down and yelling “Whoa!” Royer said. She wept.

Despite fetal surgery, many children with spina bifida are incontinent. But Charley, to the surprise of his doctors, has aced a series of complicated diagnostic tests, indicating that his bladder function is normal and he is likely to have urinary control. One concern is that scar tissue at the surgery site might grow into Charley’s spine and entangle nerves, a condition called tethered cord, which would require surgery. The first sign may be bladder or bowel trouble, or weakness in the legs. It is not uncommon in children with a history of spina bifida, and often occurs during growth spurts. The first incidence may be at age 5 or 6. It can happen more than once, and can require multiple operations.

Looking back at the fetal surgery, her subsequent months of pregnancy and Charley’s birth, Royer said: “It was a blur. You just do what you can do. At the time, you’re in fight or flight. Then there’s time to process when you get home. It was scary at first. You don’t know what to look for.”

Even though doctors reassured his parents that Charley was strong and that they should treat him like a normal baby, he seemed fragile to them. It made first-time parenthood even more stressful. Would riding in a car seat injure his spine? Was his crying normal fussiness, or something more serious? Might he have a bladder infection? Was fluid building up in his brain?

“It really took a toll that hit when he was about 6 months old,” Royer said. “I was overwhelmed, and so tired. I started having flashbacks to the diagnosis, and I would wake up crying. At the time, I just had to get through it. Then I was reliving it.”

The memory that haunted her was the day of the diagnosis, when a doctor pulled a medical textbook off a shelf and showed her and her husband tables with alarmingly high rates of paralysis and death.

She feared Charley would deteriorate.

“I always felt like it was an emergency situation,” she said. “We did everything we could to get him to this point, and we could miss something and unravel everything we did.”

Her husband is a firefighter, and the department has counselors who specialize in post-traumatic stress disorders, for both employees and their families. Lexi Royer sought counseling, and it helped, she said. But now she and her husband are grappling with a new question: How will they tell Charley about his condition?

“I think about it all the time,” Joshuwa Royer said. “But I don’t want to bore him, or limit him, or create a disability in his mind. We don’t want this to be his identity. And we don’t want to pour into him what we went through.”

As an emergency medical technician, Joshuwa Royer answered an ambulance call for an adult with spina bifida. It was a wrenching glimpse of what might have been. A shunt implanted to drain excess fluid from the man’s skull was failing; he was in a wheelchair. He had undergone more than 20 spine operations, had rods implanted in his back and needed a feeding tube because he could not swallow.

“It was an eye opener,” Royer said. “That really hit me, choked me up.”

The Royers live high in the foothills of a mountain range. Their home overlooks a canyon and distant peaks. The terrain is rough.

Joshuwa Royer looks forward to hiking with Charley, camping, building fires, fishing. “All the stuff I did as a boy,” he said. “I imagine him one day in the yard with me, teaching him stuff, working on stuff, being self-sufficient, fixing cars and stuff around the house.”

Lexi Royer is just grateful for her life with Charley now.

“I didn’t think it would be so positive, so happy,” she said. “Our days are just so normal. I wish I could have had a crystal ball then and seen how we are now. If I just could have known that everything was going to be OK. If I could have seen him sitting here, playing now. I could have saved myself so many tears.”

Why Courteney Cox Opened Up About Having Multiple Miscarriages

Please Let My Gender Non-conforming Kid Pee Where They Want