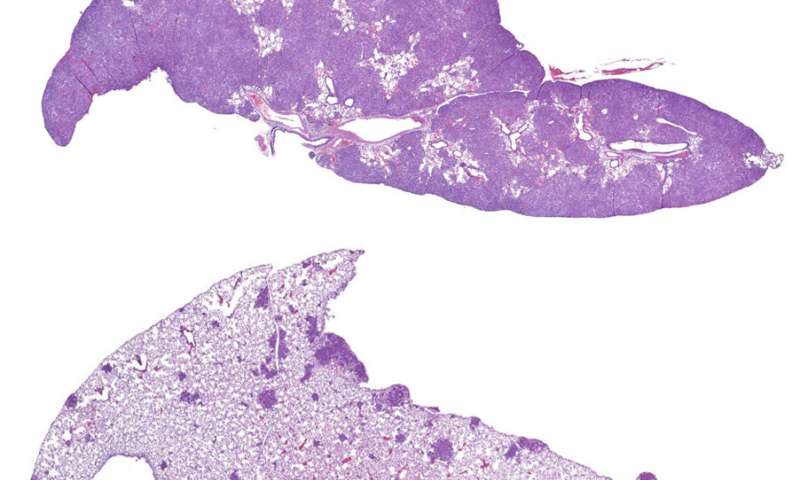 Now, a new Salk Institute study, published on July 24, 2019, in the journal Science Advances, shows that researchers could target these hard-to-treat cancers by pursuing drugs that keep a cellular “switch,” called CREB, from triggering tumor growth. The study was led by Marc Montminy, professor and J.W. Kieckhefer Foundation Chair at Salk, in close collaboration with Professor Reuben Shaw, director of the Salk Cancer Center and William R. Brody Chair.

“A drug that blocks this switch could have therapeutic benefits for patients with non-small-cell lung cancer,” says Montminy. “This disease has eluded efforts to identify effective treatments.”

Shaw adds, “There’s really no good treatment, so any insight that helps this subset of patients is a major advance.”

Scientists have studied CREB for decades. The molecule, known as a transcription factor because it binds to DNA to change gene transcription, has a key role in directing which proteins a cell can make.

The Montminy and Shaw laboratories at Salk focused on the role of CREB in patients with diabetes. Over the years, more and more research has suggested that CREB is important in cancer, but no one knew exactly how CREB affects cancer growth—until recently.

Laura Rodón, a postdoctoral researcher in the Montminy lab, wanted to look at which genes CREB binds to in patients with non-small-cell lung cancer to understand how CREB influences cancer—and reveal potential new drug targets. To do so, the team examined how non-small-cell lung cancer cell lines grew in a mouse model, studied the tumors and correlated the results with data from tumors in patients. They discovered that CREB and its partner, CRTC2, are activated in a subset of NSCLC tumors.

Normally, a tumor suppressor gene called LKB1 would block this activation—but this checkpoint is gone in patients with the altered gene. In these patients, CRTC2 is abnormally activated, and stimulates genes that contribute to lung cancer. In particular, follow-up experiments showed that CRTC2 mistakenly turns on another gene called ID1, which is known to cause cancer in other tissues.

“It was an exciting finding to show how CREB ultimately contributes to this deadly type of cancer,” says Rodón. “This gives weight to the idea that if we were able to turn off that CREB switch, we’d be able to help patients.”

The next step in this research is to look into potential drugs that can interfere with CREB or CRTC2 in this subset of non-small-cell lung cancer patients. Luckily, past studies that aimed to block CREB as a way of helping diabetes patients offer a suite of new possibilities for cancer treatments. Shaw says biomedical companies may have promising NSCLC drugs on hand and not even realize it.

“There are a lot of interesting findings in this space,” says Shaw. “Hopefully in the next couple years, we’ll know a lot more about treating these patients.”

The team agrees that this study is a great example of how laboratories at Salk work together to embrace new projects.