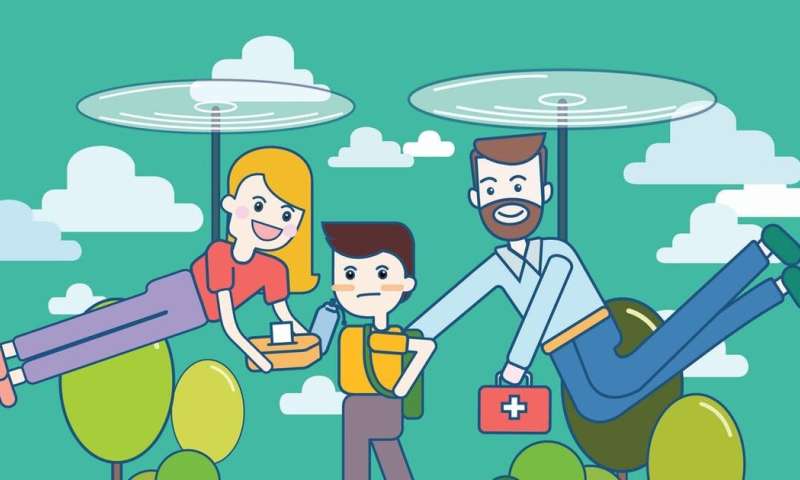 The Age newspaper recently highlighted the issue of so-called “helicopter parenting” at universities. The report talked of parents contacting lecturers to ask about their adult children’s grades, sitting in on meetings with course coordinators and repeatedly phoning academics to inquire about students’ progress.

Over-parenting involves parents using developmentally inappropriate tactics that far exceed the actual needs of their children. It involves excessive protection of children by their parents. Over-parenting is often called “helicopter parenting,” as these parents hover over their children to make sure nothing goes wrong.

While commentators have been talking about the rise of helicopter parenting among school-aged children for some years now, the idea parents would be using the same tactics on young adults is a bit more foreign.

But researchers have been exploring over-parenting among university students for some years now too, and they’ve found negative consequences for these children, including higher levels of anxiety and narcissism.

Research shows today’s parents spend more time per day parenting than in the 1980s. But we don’t know how many are over-parenting. That’s because most population studies of this nature rely on self-reports and parents are unlikely to admit to being over-zealous or controlling of their children.

Sometimes over-parenting is called “lawnmower parenting,” illustrating how parents clear their children’s life path of obstacles. Others have called this type of parenting like growing up in a green house. Media also refers to children of such parenting as “cotton wool” kids or as being in “bubble wrap.”

Obviously, most parents want the best for their children. Research shows children of loving and attentive mothers grow up more resilient and less distressed. But at which point is this positive love and care going too far? And is over-parenting actually bad for children?

In 2012, we asked 128 Australian psychologists and counsellors what they considered to be examples of over-parenting. Some of the examples they gave were:

cutting up a ten year old’s food. Bringing a separate plate of food for a 16 year old to a party as he is a picky eatera mother who won’t let her 17-year-old son catch the train to schoolconstantly badgering the school to make sure their child is in a specific class the following yearparents rushing to school to deliver items such as forgotten lunches, assignments or uniforms at the whim of their child parents believing that, regardless of effort, their child must be rewarded.

There is very little research on the effects of over-parenting in school-aged children. A 2015 study, that included 56 parents of children from prep to Year 8, found over-parenting was associated with an authoritarian parenting style and parents being anxious themselves.

Excessive parenting has also been associated with reduced self-esteem in adolescents, and a lower ability to show leadership.

The most knowledge we have of over-parenting consequences comes from university students. Excessive parenting for young adults is noticeable, and usually considered inappropriate, as it exceeds what the children developmentally want or need.

Research shows parents of university children have stepped in to advocate if their child breaches the university code of conduct or to discuss their child’s academic difficulties with lecturers. Some parents impose curfews on when their university-aged child should be in bed, monitor their adult child’s diet and exercise, vet their friends and decide what subjects they will study.

There are a number of negative consequences for university students whose parents help them too much. It has been shown these students suffer from more anxiety and depression than their peers.

University students whose parents are controlling also have low levels of self-efficacy (confidence over one’s own ability) which leads to poorer university adjustment, resulting in lower grades and difficulties in relating to others. Other studies have found negative consequences of over-parenting on the child include less autonomy, decreased levels of self-regulation, increased narcissism, attention seeking and wanting approval and direction from others.

Why are parents so concerned?

Why this type of overbearing parenting seems to be increasing is explained in various ways. Some researchers say economic pressures are responsible for parents being more invested in their child’s education so they get a well paying job.

We know that more university students are living at home and so are more influenced by their parents. In general young people often have a more delayed growing up period. Some researchers have dubbed this period of development as “adultescence.”

Regardless, whether over-parenting comes from too much love or the need to see yourself in your children, it is not the best way of parenting.