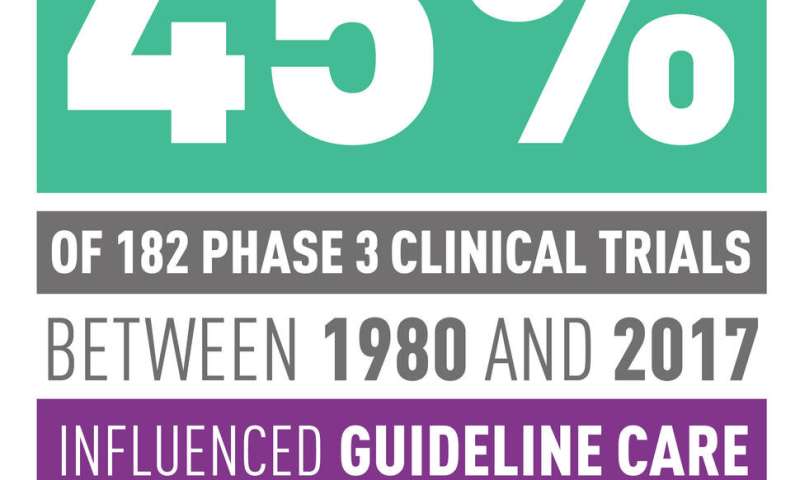 A new study shows that nearly half of phase 3 cancer clinical trials carried out by the National Cancer Institute (NCI)-sponsored SWOG Cancer Research Network, one of five groups in NCI’s National Clinical Trials Network (NCTN), were associated with clinical care guidelines or new drug approvals. NCI is part of the National Institutes of Health.

The analysis was published in JAMA Network Open and conducted by researchers affiliated with SWOG from several institutions around the country. The study suggests that NCTN trials add value regardless of whether findings were positive or negative. In addition, the authors calculated the cost of running NCTN trials, and they also found that the cost of a U.S. Food and Drug Administration (FDA) approval from an NCTN trial was much less than the cost of an FDA approval from a trial run by pharmaceutical companies.

“We found that the NCTN program contributes clinically meaningful, cost-effective evidence to guide care of cancer patients,” said Joseph Unger, Ph.D., a health services researcher and biostatistician for SWOG at the Fred Hutchinson Cancer Research Center, Seattle, and lead author of the study. “These trials are largely funded by the public, which is getting good value for their investment.”

The researchers used data from 182 phase 3 trials enrolling 148,028 patients between 1980 and 2017. These included trials that were led by SWOG or that were led by other NCTN groups with SWOG participation. According to the analysis, 82 of the 182 trials, or 45%, were found to be “practice influential,” meaning that they influenced cancer care, either by being reflected in the National Comprehensive Cancer Network (NCCN) clinical guidelines or by being associated with a new drug approval by the FDA. Of those 82 practice-influential trials, 70 influenced NCCN guidelines, six influenced new FDA drug approvals, and six influenced both.

“Federally funded cancer treatment trials fill an important gap in clinical research by seeking answers to treatment questions that might not otherwise be explored,” said James Doroshow, M.D., director of NCI’s Division of Cancer Treatment and Diagnosis, which oversees the NCTN. “This study sheds light on the critical role these trials have in guiding clinical cancer treatment, whether the findings from the trials are positive or negative.”

In fact, the influence of negative trial results on cancer care seen in this study surprised the researchers. Of the 82 practice-influential trials identified, 35, or 43%, had negative findings, with nearly half of those 35 trials reaffirming standard of care compared with experimental therapies being tested in the trials. Such negative findings signal to the oncology community which new, and potentially expensive, drugs are not effective. Negative trials can also reveal harmful side effects caused by experimental therapies.

They estimated that total federal investment supporting the trials in the study was $1.36 billion. This suggests that for 182 trials, average costs were $7.5 million per completed phase 3 trial (all trials), $16.6 million per practice-influential trial, and $123.6 million per new drug approval. In a review of 10 studies of the cost of new drug approvals by industry, the researchers found that the mean inflation-adjusted cost for a single new drug approval was $1.73 billion.

The study authors wrote that this kind of cost comparison is imperfect because pharmaceutical company trials can be more expensive, in part because of regulatory costs. Still, this comparison highlights the value of the NCTN program for taxpayers and the patients and families that benefit, according to Dr. Unger.

Is Social Jet Lag to Blame for Your Weight Gain?