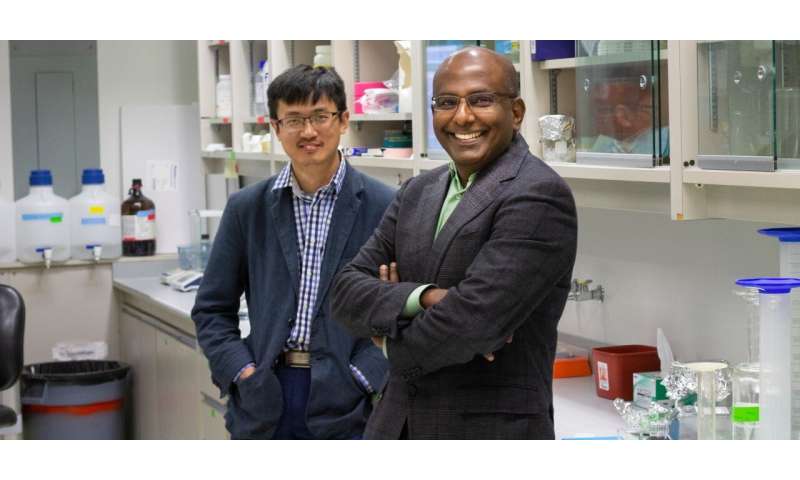 New University of Alberta research is paving the way for the first medical treatment to help protect people from cardiovascular disease by boosting the body’s natural defenses.

In a new study being published in the Proceedings of the National Academy of Sciences, U of A cardiologist Gavin Oudit and his research team found a link between a peptide called apelin and a reduction of abdominal aortic aneurysms that was shown to dramatically reduce mortality in mice.

Oudit’s team is hoping to replicate those results in patients suffering from, or at risk for, cardiovascular disease, particularly abdominal aortic aneurysms—and has established a biotech startup to commercialize their discovery.

In a series of tests using mice with aortic aneurysms and aneurysm specimens from humans, the team—which also includes U of A scientists John Vederas and Zamaneh Kassiri—found a significant health improvement for mice treated with apelin versus those who were not: none of the mice that were treated died, whereas 50 percent of the untreated mice did.

Current treatment for aortic aneurysms is limited to behaviour changes like quitting smoking, or surgical repair. There are no medical or pharmaceutical treatments that have been effective at reducing the growth rate of aortic aneurysms, but Oudit is hoping to change that with a synthetic form of apelin that can be delivered to patients intravenously.

For Oudit, who is also director of the Heart Function Clinic at the Mazankowski Alberta Heart Institute, the fight against cardiovascular diseases can be broken down into “good guys”—like apelin, a naturally occurring peptide found in several organs such as the heart, liver, brain and lungs—and “‘bad guys,” hormones or chemicals in the body that may need to be reduced or blocked so a patient can be healthier.

“We’ve become very good at blocking the bad guys, particularly using drugs like ACE inhibitors or beta blockers, to treat symptoms,” Oudit said. “But our research has focused on developing a method to enhance the good guys, to make them work better and protect people from cardiovascular disease in the first place, including heart attacks and heart failure.”

Although apelin showed promise as a treatment option, the team had to overcome the challenge of creating a stable version that wasn’t immediately broken down by other enzymes in the body. The team identified the enzymes that attack and degrade apelin and then developed a way to protect the apelin molecule to prevent the enzymes from breaking it down too quickly. That process took the team five years, Oudit said, and it resulted in a synthetic version of apelin that went from taking minutes to break down, to days.

“This is chemical engineering at its best,” he said. “We’ve engineered this analogue that is markedly resistant to breakdown and when we use it in our animal models, we’ve shown we can completely protect them from [cardiovascular] disease. Zero mortality.”

While Oudit’s team focused on abdominal aortic aneurysms in the study, the researchers say they’ve seen evidence that the apelin analogue can help in other areas of the body as well.

“We’ve seen [the analogue have] exciting effects in the kidneys for renal failure, in the heart for heart failure, in the rest of the cardiovascular system and in pulmonary arterial hypertension [vascular disease in the lungs],” Oudit said.

“What we’ve created is essentially the insulin for the cardiovascular system.”

Oudit predicts that in as little as two years, his team will have a version of the apelin analogue they will be able to test on humans. It is the driving force behind PEARKO Therapeutics Inc., a new biotech startup Oudit founded in collaboration with TEC Edmonton. Currently, the company is seeking investors and promoting the clinical applicability of the apelin analogue.

“We’re on a mission to get this to patients as soon as possible,” Oudit said. “It’s exciting because we completely drove the discovery and design of these apelin analogues.

“I think this is a great example of how translational research can start from the molecule and progress to the animal model so we can get an understanding of its clinical applicability, and from there hopefully turn it into new therapies for our patients.”

What is abdominal aortic aneurysm?

The abdominal aorta is part of the largest artery in the body, carrying blood from the heart to everything below. When a part of the artery is enlarged to more than one and a half times its normal size—which can be caused by smoking, high blood pressure or genetic factors—the enlargement is an aneurysm.

Most aortic aneurysms don’t cause any symptoms, but can become more painful as they go untreated and expand.