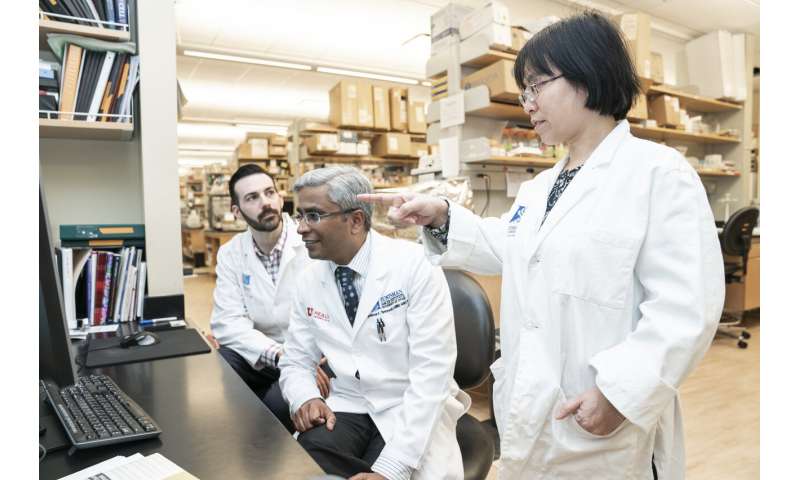 Researchers at Huntsman Cancer Institute (HCI) at the University of Utah (U of U) discovered in laboratory studies that an experimental drug called selinexor may block a crucial survival pathway exploited by myelofibrosis cells. Their study was published in Clinical Cancer Research, a journal of the American Association of Cancer Research. Based on these findings, they designed a clinical trial now open at HCI to examine this drug’s effectiveness in patients with myelofibrosis (National Clinical Trial 03627403).

Myelofibrosis is a rare cancer that prevents the bone marrow from making healthy blood cells. Life expectancy varies, but most patients will not live beyond five years after the diagnosis. HCI treats about 25 newly diagnosed myelofibrosis patients a year.

Srinivas Tantravahi, MBBS, MRCP, a physician-scientist at HCI and assistant professor of medicine at the U of U, takes care of patients with myelofibrosis, and says it is a very debilitating disease. “Essentially, it’s a bone marrow failure. The patient will experience severe symptoms including enlargement of the spleen, anemia, pain in the belly, fatigue, and a very poor quality of life,” says Tantravahi, who was part of the study team. “A stem cell transplant can potentially cure the disease, but most patients diagnosed with myelofibrosis are older or not healthy enough to undergo the weeks-long procedure.”

A drug called ruxolitinib is the current primary treatment for myelofibrosis patients who are not healthy enough to receive a stem cell transplant. This drug can decrease spleen size, improve symptoms and improve quality of life, but it does not typically reduce the percentage of malignant cells. The lack of available therapies for myelofibrosis patients motivated the research team at HCI to look for new avenues for treatment. “Ruxolitinib is a fine drug, but its effects are mostly short-lived. And, until now, there were no other options for patients who aren’t healthy enough for a stem cell transplant,” said Dongqing Yan, Ph.D., a research associate in the Deininger/O’Hare Lab at HCI and lead author on the study.

The team discovered myelofibrosis cells are highly sensitive to blockade a cellular process called nuclear-cytoplasmic transport. Anthony Pomicter, MS, manager of the Deininger/O’Hare lab explains, “Our results opened a new window for therapeutic intervention. By wonderful coincidence, selinexor, an inhibitor of this specific mechanism, is in clinical trials for certain blood cancers and now will be tested specifically in myelofibrosis patients.”

The researchers worked to establish whether blocking the nuclear cytoplasmic transport process would slow the growth of myelofibrosis cells. To accomplish this, they generated a type of mouse with a specific mutation that leads to symptoms very similar to those experienced by myelofibrosis patients. When these mice were treated with the newly tested drug selinexor they responded just as well as those treated with ruxolitinib, and importantly, selinexor actually appeared to reduce the percentage of malignant cells.

Based on these findings, the researchers designed a new clinical trial to study the effectiveness of selinexor in people with myelofibrosis. The clinical trial of selinexor in the treatment of relapsed/refractory myelofibrosis is now open at HCI. The researchers aim to enroll at least 24 patients who will receive the treatment in a setting that will allow for rigorous examination of any clinical benefit and monitoring of side effects. If this early trial indicates positive outcomes for patients, more extensive studies involving additional sites and more patients will be planned.

Scientists combine technologies to view the retina in unprecedented detail

Study demonstrates that a brain-computer interface can improve your performance