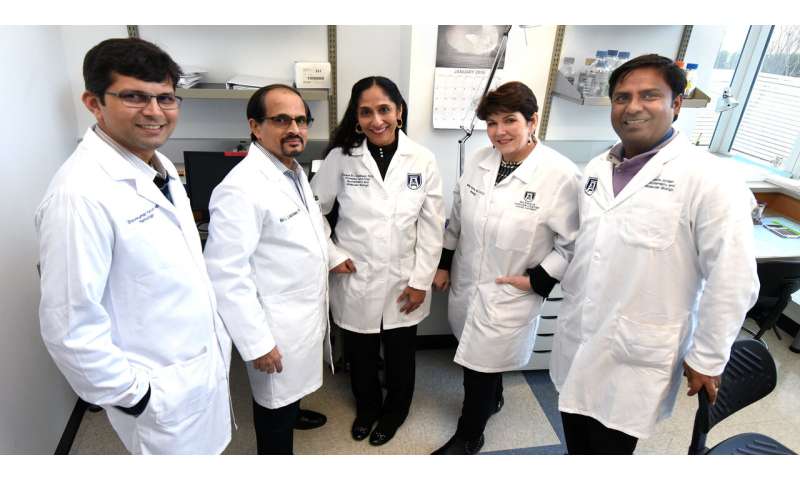 The tests look at activity and levels of V1, a gene variant upregulated in bladder cancer that dissolves natural sugars in the mucosal lining of the fist-sized bladder, making it more vulnerable to cancer.

Investigators hope the tests will one day improve patient outcomes and reduce costs for a cancer that has both high mortality and treatment costs, says Dr. Vinata Lokeshwar, chair of the Department of Biochemistry and Molecular Biology at the Medical College of Georgia at Augusta University.

Today there is no good, noninvasive method to determine if you have bladder cancer, says Lokeshwar. She’s principal investigator on a new $2.3 million grant from the National Cancer Institute and $608,000 grant from the U.S. Department of Defense that are helping determine if these tests can meet that need.

While there are several biomarker tests on the market, they are often expensive, don’t necessarily provide a lot of useful information, and have high rates of false positives and/or low sensitivity for cancer detection, says Dr. Zachary Klaassen, urologic oncologist and director of clinical urologic research at MCG and the Georgia Cancer Center.

Consequently, Klaassen does not use these tests frequently but would definitely like one that provides good information about the cancer’s grade and recurrence risk.

That’s why he is a co-investigator on these new studies that are pitting the new urine tests against the traditional methods he and others use for diagnosing and monitoring bladder cancer. They include frequent cystoscopies, where physicians place a small camera through the urethra—the tube through which urine flows—and into the bladder so they can directly see what is going on.

Suspicion of bladder cancer can surface with a nonspecific symptom like blood in the urine, called hematuria, which can indicate a wide variety of problems from infections to kidney stones.

In fact, while painless hematuria is the most common sign of bladder cancer, only about 10-25 percent of patients with blood in the urine are found to have bladder cancer after an extensive, invasive workup, Lokeshwar says.

The new tests look in the urine for V1, the gene variant Lokeshwar found a decade ago that is elevated in bladder cancer, even higher in aggressive, high-grade tumors and can be measured in the urine.

They already have evidence in human tissue that it’s a good prognosticator of patient outcomes, for early detection of muscle-invading disease and even for response to chemotherapy drugs routinely given to those patients whose cancer has invaded the bladder’s muscular wall.

One test looks at the activity level of the enzyme which V1 codes for and which actually degrades sugar polymers in the bladder’s lining. The other test measures the amount of V1 by looking at the expression of its mRNA in cells that are exfoliated in urine from the bladder.

Together they appear to paint a pretty clear picture about whether bladder cancer is present, what it looks like at that moment and how it may behave in the future.

Previous work in human tissue has shown both tests are about 90 percent effective at detecting bladder cancer. The V1 test is about 95 percent accurate at detecting higher-grade cancers, including those that have spread to the muscular wall of the bladder, which likely results in patients having their bladder removed and sets the stage for spread beyond the bladder.

The investigators are performing the new tests concurrently on patients receiving standard evaluation for blood in their urine to see how they compare. In patients being monitored for recurrence, they are also examining issues like whether a positive urine test on a patient who had a negative cystoscopy accurately predicts a future recurrence and whether increasing levels of V1 can predict how rapidly recurrence happens.

They also are looking at whether V1 levels are an accurate predictor of patient outcome, like whether the cancer will metastasize. Pilot studies have indicated that the tests can detect high-grade tumors six months before cystoscopy.

They also are looking further at how V1 itself supports tumor progression and chemotherapy resistance.

Today about 50 percent of patients with low-grade bladder cancer and about 80 percent with high-grade have recurrence within three years.

Five-year survival for patients with metastatic bladder cancer is about 15 percent.

While bladder cancer rates are currently higher in males, female prevalence is increasing, likely because their rates of smoking also are approaching that of males, Klaassen says.

In women the diagnosis of bladder cancer is often delayed because when women present with blood in their urine at their primary care doctor’s office, the presumption is that they have a urinary tract infection, Klaassen says.

If the blood is not noticeable, it takes longer for the diagnosis, as the hematuria associated with bladder cancer is often painless. So patients do not even know that they need to go to the doctor, if they have no visible symptoms, Klaassen says.

When they find blood, microscopic or otherwise, particularly in high-risk individuals like smokers, physicians often next do a urine test to look for cancer cells, ultrasound or CT imaging of the urinary tract, as well as cystoscopy, where they can actually see the urinary tract, including the bladder lining, the prostate in males and the urethra.

Cystoscopy is typically done again every few months after bladder cancer diagnosis to check for signs of recurrence and may be used periodically lifelong. Klaassen notes that while unnecessary cystoscopies hopefully can be reduced with the aid of an accurate biomarker test, when patients do have cancer, there is no substitute in his mind for periodically taking this first-hand look.

Recurrence is a problem for both low-grade and high-grade bladder cancer, happening in about half of patients with low-grade cancer and about 80 percent with the more aggressive, high grade.

Bladder cancer typically starts in the layer of cells that line the inside of the bladder, which is directly exposed to urine. Areas of metastasis include nearby lymph nodes and the bone.

When a low-grade cancer is detected, the tumor is removed and the patient is monitored by cystoscopy for occurrence of a new tumor in the bladder. The schedule is usually every three months for two years, every six months for two to five years and yearly thereafter. But when there is recurrence, the clock starts again. High-grade tumors tend to invade bladder muscle, so if it hasn’t yet, the patient is treated mainly with immunotherapy directly introduced into the bladder, once the tumor is removed,

With the high-grade tumors, when the cancer invades the muscular wall more than 50 percent of patients develop metastasis within two years. Once it has moved into the wall, physicians usually give the patient a 12-week course of systemic chemotherapy with the goal of killing off cells that have wandered beyond the bladder, before removing the bladder.

Investigators think one way the new tests will help is by preventing this multi-week delay in some patients by identifying those who won’t respond to the drugs, rather might benefit more from earlier removal of the bladder.

Once the bladder is removed, urine collection can be handled with an external bag, called a urostomy pouch. Surgeons like Klaassen also can create a new bladder out of a portion of the patient’s bowel called a neo bladder.

V1 is a variant of a gene that encodes for an enzyme that degrades glycosaminoglycans, or GAGs. GAGs are basically sugar polymers that keep our tissues hydrated and lubricate our joints. GAGs such as hyaluronic acid are present in several beauty creams promising a younger looking skin. In cancer though, GAG-degrading enzymes such as V1, may help tumor cells escape into blood circulation and consequently spread to vital organs. Since high-grade bladder tumors have a tendency to metastasize, it makes sense that they express V1, says Lokeshwar.

Smoking is absolutely the number one risk factor for bladder cancer, Klaassen says, as the carcinogens you inhale find their way into the urine then sit in the bladder.

Spinal cord injury patients with bladder catheters also are at increased risk, as are individuals exposed to some chemicals, like in paints and dyes.

Dr. Martha Terris, chief of the MCG Division of Urology and a coinvestigator on the new studies, reported in the British Journal of Urology International a decade ago a link between Agent Orange exposure and the risk of aggressive recurrence of prostate cancer in veterans. More recently, exposure to the chemical has also been linked to bladder cancer.

For the studies, biostatistician Dr. Santu Ghosh, in the MCG Department of Population Health Sciences, will analyze the extensive patient and test data they will be collecting, so they can ultimately answer questions like how well test findings compare with cystoscopy.