The use of plastic is one of the conveniences of modern life, but in recent years microplastic contamination has become an emerging global concern. Microplastics ––plastic particles measuring less than 5mm ––are everywhere ––from the deepest oceans to the air we breathe. Their small size and mass mean they are readily transported by wind and microplastics have been found in the remotest of places on Earth ––including mountainous and polar regions. 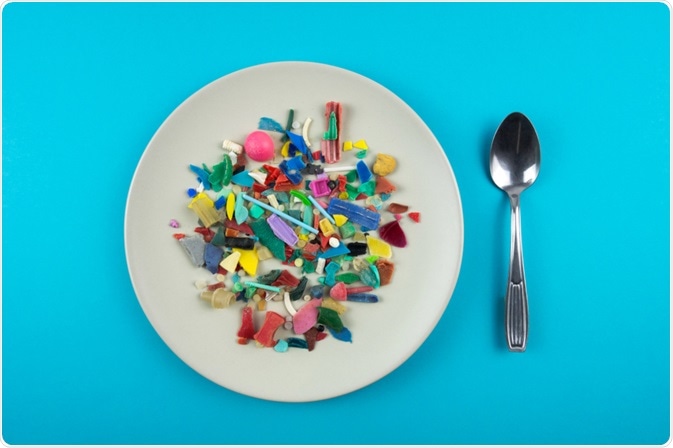 Microplastics are even present in the food we eat and in the water we drink. They impact the living world and have been discovered to affect nearly all levels of biological organization. This article looks at what microplastics are and considers their potential effect on human health.

Dunzhu Li, an environmental engineer, ceased microwaving his lunch at work each after he discovered that plastic food containers released tiny particles called nanoplastics. The same problem was found to apply to kettles and baby bottles. The finding was alarming, but scientists did not know how harmful it might be ––after all we regularly ingest and inhale dust, for example.

Plastic can be of variable composition. And it contains a wide range of additives:

More plastic becomes waste after it is discarded and, due to its durability, the resultant pollution lasts for many years. In fact, the microplastic problem continues to worsen with every passing year. The annual projected mass of microplastics produced ––around 400 million tonnes –– is expected to have more than doubled by 2050.

The ubiquity of airborne microplastics is a result of:

How Do They Affect Human Health?

Microplastics surround us and human exposure can occur through inhalation, ingestion, and dermal absorption due to their omnipresence in air, water, food, and consumer products.

Scientists think we may ingest anywhere from dozens, to more than 100, 000 microplastic particles each day ––as a useful visual it could be around the mass of a credit card’s worth in the space of a year. Even the synthetic clothing we wear can shed fibers ––some studies have revealed textiles to be the major source of airborne microplastics.

No research has yet been done to directly study the effects of microplastics on people. The research available so far either exposes human cells or tissues to microplastics or has investigated animals, such as mice or rats, as part of the study.

Using the data that is available then, it is believed that microplastics may be hazardous to our health. It is thought they might act as irritants, in much the same way asbestos fibers are now known to inflame the lungs and cause cancer. Microplastics are also thought to act as vectors for microorganisms and toxic chemicals, thus posing further health risks.

Research has shown the potentiality for metabolic disturbance, neurotoxicity as well as carcinogenic effects. It has been shown that microplastics can act as endocrine disruptors, thus interfering with normal hormone function and potentially causing weight gain.

Scientists have been looking at the potentially harmful effects of microplastics for over 20 years and most studies undertaken so far have concentrated on the risk to marine life (we currently know far less about airborne microplastics). Microplastics have been detected in a wide range of aquatic organisms from whales to minute zooplankton. It was a marine ecologist, Richard Thompson, at the University of Plymouth, UK who coined the term “microplastics” in 2004.

These microplastics pose a physical and physiological threat to marine organisms and because they are readily transferred and bioaccumulated in the food chain, they pose a threat to humans too.

But studying the impact of marine microplastics on human health is difficult:

We do not know a great deal about how food processing and cooking might affect the toxicity of plastics in aquatic organisms, nor indeed what level of contamination could do harm.

A basic tenet of toxicology holds that the dose makes the poison, but many of these chemicals—BPA and its close relatives, for example—appear to impair lab animals at levels some governments consider safe for humans"

On a more positive note, it is thought that microplastics remain in the guts of fish rather than moving into the muscle tissue which is the part of the fish we consume.

The concern remains that microplastics are omnipresent ––in 2015, oceanographers estimated between 15 – 51 trillion microplastic particles were floating about in surface waters across the globe (see Lim, 2021) ––and that in time they’ll inevitably degrade into nanoplastics, which are invisible to detect. But we need to bear in mind that plastic waste can be recycled or recovered.

These minuscule particles have the capacity to move into the cells, tissues, and organs of the body. Regulators have now taken steps towards measuring human exposure to microplastics and quantifying the risk they pose to our health.

But assessing their overall risk to our health is the challenging bit. In the case of ingested microplastics, the level of toxicity we are potentially exposed to depends very much on how quickly they pass through the system. This is something researchers are now beginning to address.

I’m currently working as a post-doctoral fellow in the History of Science at the Leeds and Humanities Research Institute (LAHRI), at the University of Leeds. Broadly speaking my research area falls within the remit of the history of biology and history of technology in the twentieth century. More specifically I have specialist knowledge in the areas of electron microscopy and cellular and molecular biology, women in science and visual culture.