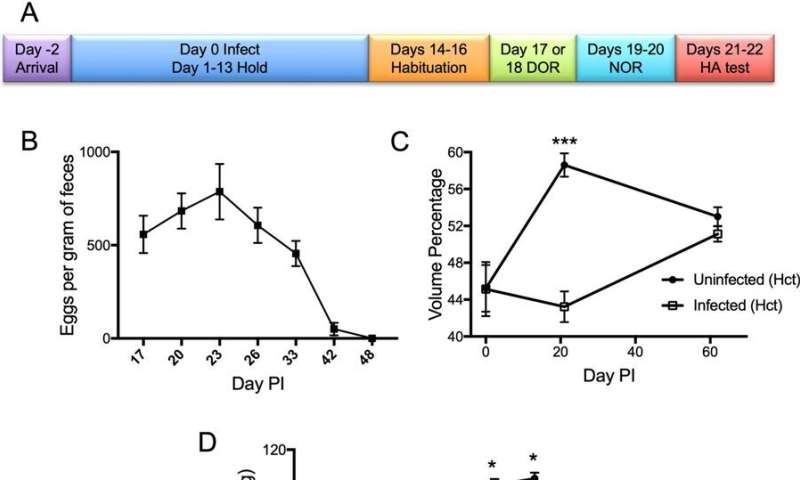 Evidence from the lab of Raffi Aroian, Ph.D., shows that short-term human hookworm infection, even at low levels, can cause rapid, acute and measurable cognitive impairments in spatial memory among a mammalian animal model. These findings, published in Scientific Reports, highlight the global importance of hookworm elimination and suggest that additional, specific, spatial memory studies be carried out.

“These parasites have a real impact on brain function in rodents, independent of long-term developmental delays, that can be observed very quickly after initial infection,” said Dr. Aroian, professor of molecular medicine. “This means we’ve very likely been underestimating the impact these parasites have on the brain in both children and adults, but particularly in very young children.”

Hookworms are a species of parasites that live in the small intestine and infect via the skin, circulation and lung. Hookworm infection is most common in the developing world where proper hygiene and sanitation are a challenge. Long-term infection is known to cause severe developmental and cognitive impairments. The Centers for Disease Control and Prevention estimates that infection occurs in 576 million to 740 million people worldwide.

Hookworm infection is one of the leading causes of anemia, stunted growth and malnutrition. The worms can live in the small intestine for a few years typically, but for as long as 10 years, consuming blood and robbing their hosts of iron and protein, interfering with absorption of critical nutrients, and suppressing the immune system. Infection can lead to chronic anemia, as well as permanently stunt the physical and intellectual development of infected children.

Three species of hookworms can infect humans. People most commonly infected typically reside in poverty-stricken areas with poor sanitation and are exposed to the worm through contaminated soil or food. Common in the American south 100 years ago, hookworms were virtually eradicated in the United States through improvements in sanitation and public health efforts during the early part of the 20th century.

According to Aroian, prior research into this area has been hindered by an assumption that cognitive impairments happen due to developmental delays and malnutrition caused by long-term infection. While it is clear that heavy infection loads over time do impact development and brain function, said Aroian, it is less clear if infection can cause acute cognition impairment independent of stunting.

Cognition studies on patients have also been plagued by a lack of accurate data due to the impoverished state of infected populations and the sheer number of environmental variables that may or may not influence cognitive development. Some studies have shown significant deficits in working memory and cognition performance while others have found only minimal deficit. Meanwhile, interventional studies on hookworms have produced conflicting results on the effect of clearing the infection. Some studies have shown cognitive improvement after treatment while others have shown no improvement.

In order to study the acute effects of hookworm infection on brain function in a controlled laboratory setting, Aroian and co-investigators developed a series of experiments to test spatial memory and object memory in rodents.

To mimic acute infection, rodents were infected with juvenile Ancylostoma ceylanicum, a species of hookworm that can infect humans, dogs, cats and rodents. Aroian and colleagues completed a series of tests designed to assess whether the animal could recognize a new object placed in its environment (object memory) or an object that had been moved from one place to another within its environment (spatial memory) within 17 to 22 days of infection.

Surprisingly, researchers found that the ability to recognize a new object placed in the rodents’ environment was unchanged regardless of hookworm infection or intensity. However, in a measure of spatial memory, rodents were compromised even at low levels of infection in their ability to detect an object that had been moved. At higher levels of infection, the rodents failed the task and showed no preference for the moved or unmoved object.

These results could not be attributed to lethargy or lack of interest generated by infection from the parasite as the tested animals performed normally on object memory tests and activity levels were indistinguishable from noninfected rodents.

“There is mounting evidence that changes in the microbiome in the gut, by altering neuropeptides, neurohormones and neuroactive active substances that can cross the blood-brain barrier, can modulate brain functions and impact spatial memory and learning,” said Aroian.

In order to investigate a link between hookworm infection and the brain, Aroian investigated whether hookworm infection caused changes in the microbiome of the rodents. Genetic sequencing of gut bacteria in infected and noninfected rodents showed a decrease in microbial diversity and changes in microbial taxa at the family and genus level. These changes provide one possible mechanism through which hookworms may impact cognitive function and contribute to spatial memory defects.

“Our work shows that these parasites have a real impact on cognition, independent of long-term developmental delays, that can be observed within a very short period,” said Aroian. “It may also help explain some of the inconsistencies of past studies as only spatial memory may be impacted. These results demand additional, more finely tuned research in order to understand how infection affects cognitive function and development.

When neurons get the blues: Hyperactive brain cells may be to blame when antidepressants don’t work