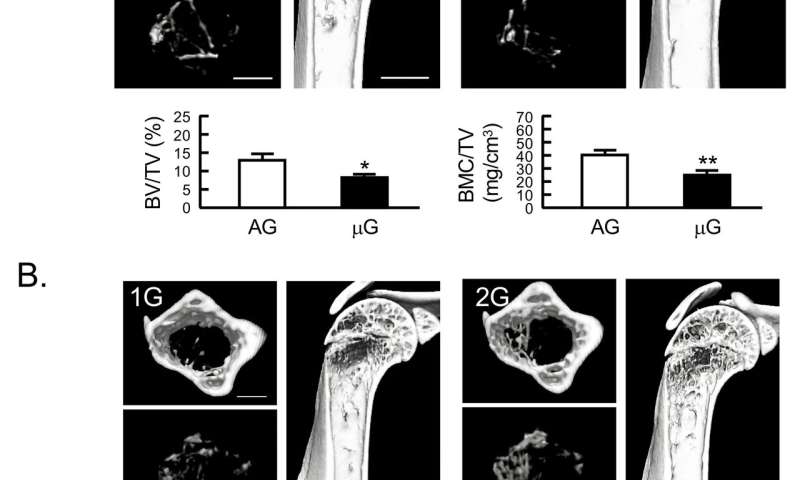 An international collaboration led by scientists mainly at Tokyo University of Agriculture and Technology (TUAT), Japan, has found that bone and muscle mass are regulated by the altered gravity. The experiments were done in space using Kibo, a ISS module developed by JAXA, and on the ground.

The researchers published their results on April 29th in the journal, Scientific Reports.

The research team explored the maintenance of the bone and muscle mass of mice among the opposite living circumstances of microgravity and hypergravity. “We examined the effects of 2G hypergravity on the ground and artificial 1G gravity in space for the effect of bone and muscle mass using newly developed centrifuge devices”, said Dr. Masaki Inada, corresponding author on the paper and Associate Professor in the Department of Biotechnology and Life Science, Institute of Global Innovation Research at TUAT.

The team found that changing gravity with a physical load of one’s own body weight altered the bone mass of the forefoot (humerus) especially in fourth-foot walking animals (tetrapods) such as mice. For example, with lower gravity in space, observations showed loss in some bones such as the humerus and tibia. In addition, more gravity, i.e., 2G on the ground, artificially created by the centrifuge device, caused more muscle development such as in the lower leg muscles (muscles from knee to ankle).

From genes to receptors to perception: olfaction unraveled