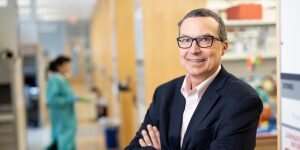 University of North Carolina Lineberger Comprehensive Cancer Center researchers have discovered a promising method to identify aggressive breast cancer tumors that will respond to drugs that unleash the immune system against cancer.

The U.S. Food and Drug Administration recently approved a treatment that combines an immunotherapy drug and chemotherapy for triple negative breast cancer, but not all cases of this aggressive form of breast cancer responded in clinical studies.

UNC Lineberger researchers discovered biological clues that could help identify which tumors might respond to the combination treatment.

Their findings, published in the journal Cell, were drawn from studies in mice and an analysis of data from six clinical trials. If confirmed in future studies, the insights could help guide patients to the right treatments, sparing them from those that are not effective. It also could lead to an approach to make the drugs work in cancers that don’t initially respond.

“Potentially, we have a new biomarker to be used to figure out which triple negative breast cancer patients should be receiving immunotherapies,” said UNC Lineberger’s Charles M. Perou, Ph.D., the May Goldman Shaw Distinguished Professor in the UNC School of Medicine departments of genetics and pathology.

Atezolizumab is a checkpoint inhibitor, a type of immunotherapy that “releases the brakes” on certain immune cells called T cells, freeing them to find and attack cancer cells. These treatments have been groundbreaking for patients with advanced melanoma, the deadliest form of skin cancer, and other cancers.

A New England Journal of Medicine study last October reported that the combined atezolizumab-chemotherapy regimen produced prolonged progression-free survival for some patients with triple negative breast cancer that tested positive for the PD-L1 protein. Forty-one percent of patients were PD-L1 positive, and not all of these tumors responded to the combination therapy.

In order to answer this question, the mouse models had to respond to immunotherapies—which existing models did not. They genetically modified existing models so that they contained a high number of so-called “tumor antigens”—irregular proteins in the tumor that can trigger the immune system—so the altered models were highly responsive to immune treatments.

They then used genetic tools to analyze the biological features of the tumors that responded, and uncovered a “signature” of response using gene expression data.

The signature revealed clues about what could be causing the immunotherapies to work: The patients whose cancer responded to treatment had a coordinated immune response to the cancer that involved multiple types of immune cells, including both T-cells, which can directly attack and kill tumors, and B cells, which make antibodies that may also attack tumors.

“The biomarker signifies a coordinated effort of the adaptive immune system,” Perou said.

“There are many types of immune cells, and they need to work together to mount an effective immune response, and this biomarker shows when B cells and T cells are working together,” Perou said. “And whenever we see that, it predicts a better response—whether it to be immune therapy in melanoma, HER2 targeting therapy in breast cancer patients or chemotherapy in triple negative breast cancer patients.”

They believe the finding could identify both patients who would benefit from the therapy, and also those who wouldn’t.

He added that they also want to use their findings to discover new ways to boost treatment responses.

“Our work going forward right now is to look for ways to leverage B cells to improve treatment plans and regimens for breast cancer patients,” said Dan Hollern, Ph.D., the first author of the study and a postdoctoral research associate at UNC Lineberger. “We definitely need to be looking at ways to activate B cells more effectively with our therapies.”