Signs of neurodegenerative diseases, appearing years before the emergence of clinical manifestations, can be detected during the examination of medical samples by means of fluorescence microscopy by using new sensitive and selective dyes that bind to specific amyloid structures. The new dye, proposed by the Polish-American group of scientists, is a step toward personalized neuromedical treatment of the future. These avenues of detection are being opened thanks to the achievements of a Polish-American team, which includes scientists from the Institute of Physical Chemistry of the Polish Academy of Sciences (IPC PAS) in Warsaw, Wroclaw University of Technology, the University of Michigan and the University of California, Santa Barbara.

Memory disorders, Creutzfeldt-Jakob disease, and Alzheimer’s disease are among those related to the formation of amyloid fibril deposits of complex shapes. Researchers believe that the first signs of neurodegeneration could be identifiable in medical laboratories at an earlier stage of development, and in a much more precise way than ever before.

With the aging of society, the importance of early detection of neurodegenerative diseases, usually manifesting in people at a later age, is growing. The stakes are high—just from looking at the data on Alzheimer’s disease. While just 3 percent of people over 70 years of age suffer from the disease, as many as half of the population suffers after the age of 90. It is known, however, that this disease probably begins even 20 years before the onset of its first symptoms. In this situation, the early and precise detection of its harbingers takes on a particular significance.

“Before a lab technician examines a sample of a patient’s cerebrospinal fluid under a fluorescence microscope, he must somehow label the required chemicals with a fluorescent dye. For this purpose, researchers use small fluorescent molecular tags that bind with the molecules they want to detect. The study proposes using the polythiophene derivative PTEBS as the dye. This is a polymer, quite a large atomic structure. In practice, molecules the size of PTEBS have quite a significant advantage,” says Dr. Piotr Hanczyc of the Faculty of Physics, University of Warsaw), the first author of the publication in the September print issue of the Journal of Luminescence. 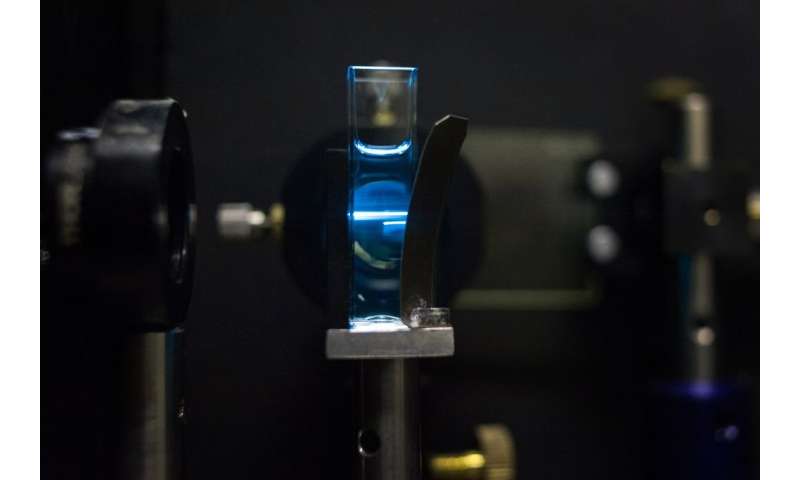 The team’s research has made it possible to conclude that the presence of both the required chemical molecules as well as their aggregates can be recorded using the PTEBS dye, even when they are present in the sample at significantly lower concentrations than detected by thioflavin T, currently one of the most popular fluorescent dyes used for labelling protein aggregates.

An important advantage of the new dye is related to the existence of polymorphic forms of amyloid, i.e. the fact that while one configuration of atoms in a molecule may be responsible for triggering neurodegenerative processes, the another can turn out to be harmless.

“Standard dyes are molecules of a small size. You cannot do too much with them. In addition, they have been thoroughly tested and a lot is already known about them. The molecules of our dye are large, and many substituent groups are attached to the main chain. These groups can be modified and extended to a large extent, increasing the affinity of the dye not only to the selected form of amyloid, but also to its specific polymorph. This gives us a lot to work with,” says Dr. Hanczyc.