Woman ignored a small lump in her stomach for 13 YEARS until it grew into a tumour the size of an 8.8lbs baby

A woman ignored a lump in her stomach for 13 years while it grew into a tumour the size of a newborn baby.

Beverley Jaundrill had to carry her heavy tumour under her arm and hide it with baggy clothes.

She was later diagnosed with sarcoma, a rare form of cancer which is normally diagnosed when the tumour grows to around the size of a can of baked beans.

Ms Jaundrill, from Preston, said: ‘I knew it shouldn’t have been there, but I was scared and didn’t do anything about it.’

Doctors at the Royal Liverpool Hospital were stunned to remove a 4kg (8.8lb) mass from her stomach. 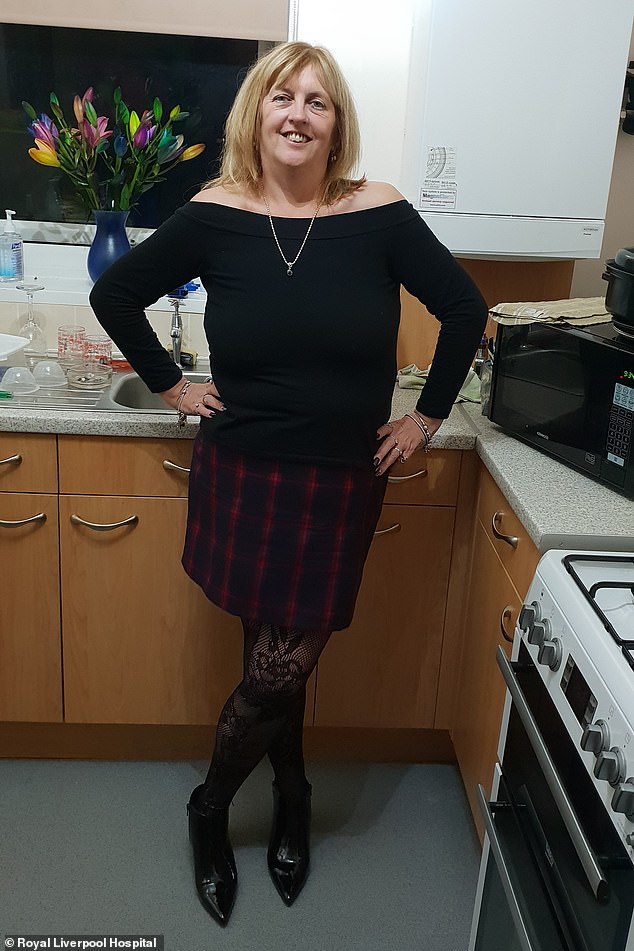 Beverly Jaundrill, from Preston, ignored a stomach lump for 13 years because she was scared. Eventually she was diagnosed with sarcoma, a form of cancer, and had the 4kg lump removed

The mother first noticed the lump around 13 years ago, but only noticed how it had grown this year.

She said: ‘Back in March I had been sick with gastroenteritis and lost some weight and that’s when I noticed the large lump was there.

‘It became very painful and very heavy. I had to put my hand underneath the tumour to carry it. I also had a really bad cough – it was scary wondering what it was.

‘When it got to a certain size, it was growing outward from the side of my body, so I couldn’t wear a normal top. I had to buy bigger clothes just to hide it really.

Sarcomas are uncommon types of cancer which can grow anywhere in the body – on muscle, bone, tendons, blood vessels and fatty tissue.

Bone sarcomas are rare and affect approximately 670 people per year – but there are other types of bone cancers.

There are around 100 different types of sarcomas and about 5,300 people are year are diagnosed with them in the UK.

Sarcomas can be treated well if people catch them early, but many people do not get diagnosed until their tumours are about the size of a tin of beans.

Only slightly more than half of people with sarcomas (55 per cent) survive for five years or more after their diagnosis.

Symptoms of sarcomas can include bone pain, swellings or lumps, and restricted movement if it is growing near a joint.

Treatment may involve typical cancer therapies such as surgery, chemotherapy or radiotherapy.

‘I would struggle to sit as it was such a big size so I had to sit sideways, and on the sofa downstairs I had cushions all around me as it was just too painful.

‘When I needed to turn in bed, if I turned to the right it felt as it was dragging and then pulling, which was quite painful too.’

Ms Jaundrill was referred to the Linda McCartney Centre earlier this year and was placed under the care of Dr Coonoor Chandrasekar, a consultant at the Royal Liverpool and Broadgreen University Hospitals NHS Trust.

Dr Chandrasekar said: ‘Any unexplained lump needs to be seen by a doctor and a scan or MRI arranged at the earliest possible opportunity.

‘Sarcomas are treatable conditions and we prefer to treat them when they are small – but it doesn’t mean that we can’t help people if they are larger.’

Ms Jaundrill was terrified about having the tumour removed.

She said: ‘I was really scared the morning of the operation; I kept thinking am I going to wake up after this? But I had a brilliant stay and couldn’t ask for anything more – everyone was so nice to me..’

Ms Jaundrill is now having radiotherapy treatment to eradicate any further risk of the sarcoma returning.

She is recovering well, but has warned others not to make the same mistake and get any unexplained lumps checked out. 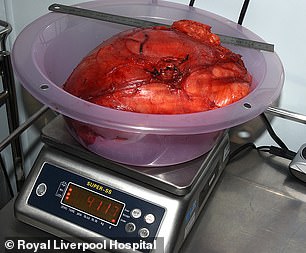 She said: ‘I know it’s gone, but it’s just a backup. For anyone who has a lump that they’re worried about, my advice is to come in early; don’t leave it like I did when it became massive. Go and get it sorted straight away.

‘I’ve learnt the hard way, but I am so glad that I did get help eventually and I am very lucky at where the tumour was located and that it wasn’t wrapped around any of my organs.

‘Just get to the doctors and get checked out. Don’t be scared.’

There are around 100 different sub-types of sarcoma.

Only slightly more than half of people with sarcomas survive for five years or more after their diagnosis.

How to Keep Your Teeth Healthy During the COVID-19 Outbreak