Cancer survivor, 41, who had a double mastectomy reveals she caught sepsis a month after having breast implants fitted and was given just 24 HOURS to live

A cancer survivor who had undergone a double mastectomy was left fighting for her life after getting sepsis a month after having breast implants.

Liz Gooch had breast augmentation a year after the life-changing procedure, which followed her battle with an aggressive form of breast cancer.

Just one month after the operation to give her two implants, the 41-year-old became unwell, vomiting and shivering through the night.

Ms Gooch, of Pontypridd, south Wales, was rushed to hospital and doctors allegedly said she may only have ’24 hours to live’.

Tests showed Ms Gooch had E. coli, as well as chest and bowel infections. Sepsis is caused by the immune system overreacting to an infection.

Surgery patients are at higher risk of the life-threatening condition because they are more likely to contact infections after an operation.

The payroll assistant – whose immune system was already weak because of cancer – was placed into a coma for three days as medics desperately tried to save her life.

Ms Gooch – who hasn’t been told the breast implants were to blame directly – has since decided to have them removed and instead uses prosthetic breasts. 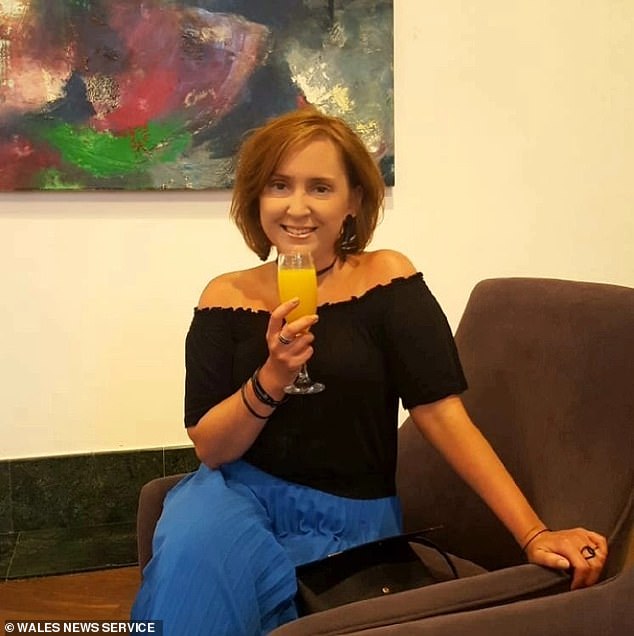 Liz Gooch, 41, was left fighting for her life when she developed sepsis after a boob job 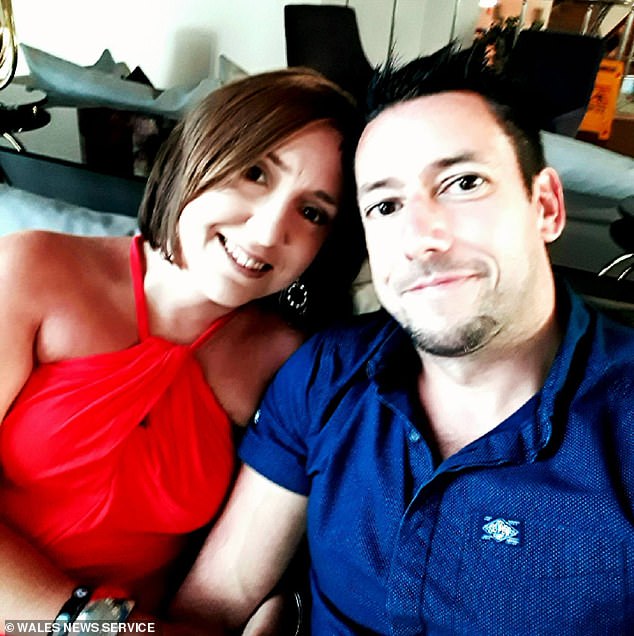 The payroll assistant from Pontypridd, south Wales, pictured with her fiancé, Wayne, was having a breast augmentation after having a double mastectomy due to breast cancer

Ms Gooch, who also went through chemotherapy for cancer, said: ‘Having sepsis was honestly worse than my cancer diagnosis.

‘At least with my cancer diagnosis I felt more prepared and knew what treatment I needed.

‘With sepsis it all happened so fast and it was really terrifying. It was really touch and go and my parents were told I only had 24 hours to live.’

Ms Gooch was diagnosed with triple negative breast cancer three years ago, after finding a lump in her breast.

After going under the knife, Ms Gooch had been really pleased with her new breasts, and said: ‘Surgeons said it was one of the best [implant operations] they had ever seen.’

She had the tell-tale signs of sepsis, a killer illness that also causes rapid breathing, an abnormally high or low temperature, mottled skin and feeling dizzy or faint.

Ms Gooch said: ‘I had sepsis, E. coli, a chest infection and a bowel infection.’ It is not clear where she contracted any of the bugs.

E. coli is most commonly contracted by eating contaminated food, and people who have weakened immune systems are more likely to become ill.

These people are also at a higher risk of complications from the infection, such as pneumonia, meningitis, and sepsis.

Without prompt antibiotic treatment, which should be given within an hour of being diagnosed, sepsis can lead to multiple organ failure and death. 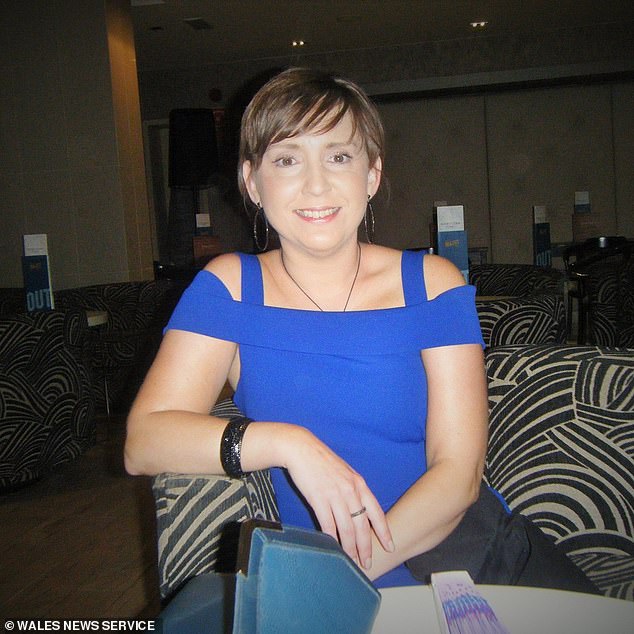 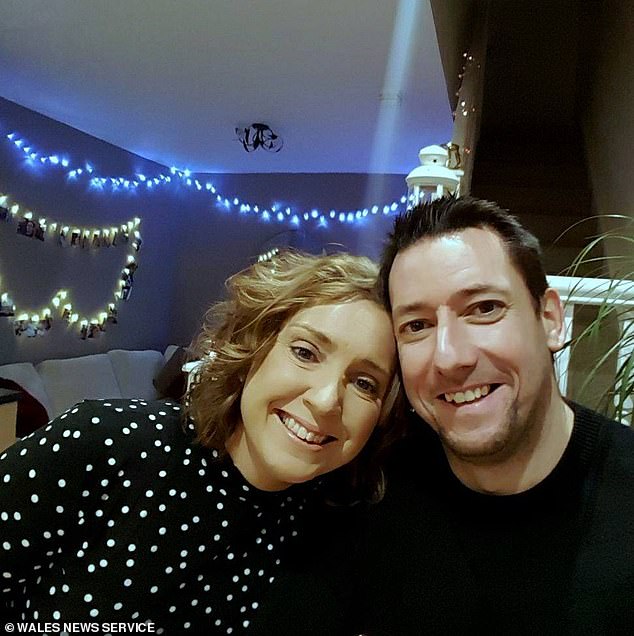 Ms Gooch said she had a chest and bowel infection, believed to have caused sepsis 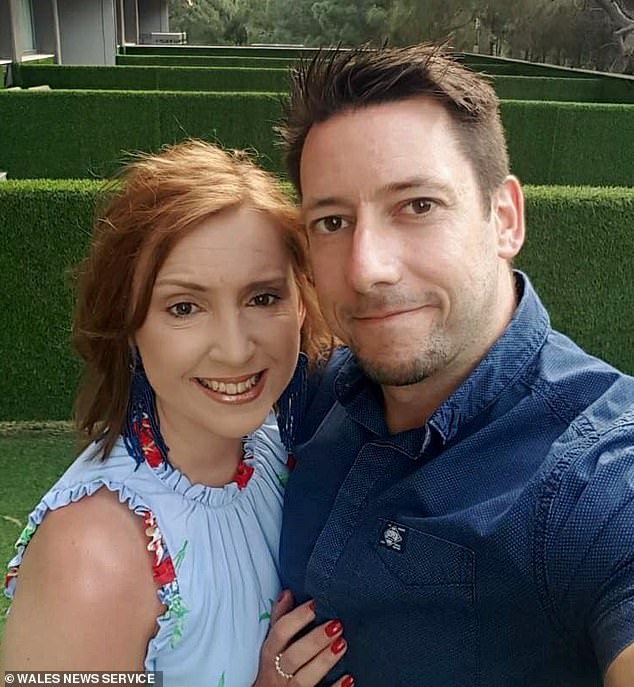 Doctors said Ms Gooch may only have 24 hours to live, she claims

There are around 250,000 cases of sepsis every year in the UK, and an estimated 52,000 deaths, according to the UK Sepsis Trust.

Ms Gooch said: ‘The last thing I can remember is someone saying I needed to be taken into surgery.’

Surgery may be needed to remove sources of infection which are triggering sepsis, such as collections of pus, infected tissues or gangrene, according to the Mayo Clinic.

Ms Gooch said: ‘I was in hospital for two weeks and then it took me a further three or four months before I made a full recovery and could go back to work.

After making a full recovery, Ms Gooch is now looking forward to marrying to her fiancé, Wayne, in May next year.

She is also taking part in Cancer Research UK’s 10k night-time walk in Cardiff – and has been chosen as the event’s VIP.

More than 1,200 people have already signed up to the event which will raise money for lifesaving research.

Ms Gooch said: ‘It’s an honour to be sending participants over the start line at Cardiff’s Shine event as well as taking part myself.

‘I know just how vital research is and how much we need better, kinder treatments for the disease, so I hope people sign up and join me at Shine to support this brilliant cause.’

Sepsis occurs when the body reacts to an infection by attacking its own organs and tissues.

Some 44,000 people die from sepsis every year in the UK. Worldwide, someone dies from the condition every 3.5 seconds.

Sepsis has similar symptoms to flu, gastroenteritis and a chest infection.

Symptoms in children are:

Under fives may be vomiting repeatedly, not feeding or not urinating for 12 hours.

Anyone can develop sepsis but it is most common in people who have recently had surgery, have a urinary catheter or have stayed in hospital for a long time.

Other at-risk people include those with weak immune systems, chemotherapy patients, pregnant women, the elderly and the very young.

Treatment varies depending on the site of the infection but involves antibiotics, IV fluids and oxygen, if necessary.

Incredible picture shows a man left starry-eyed after being punched