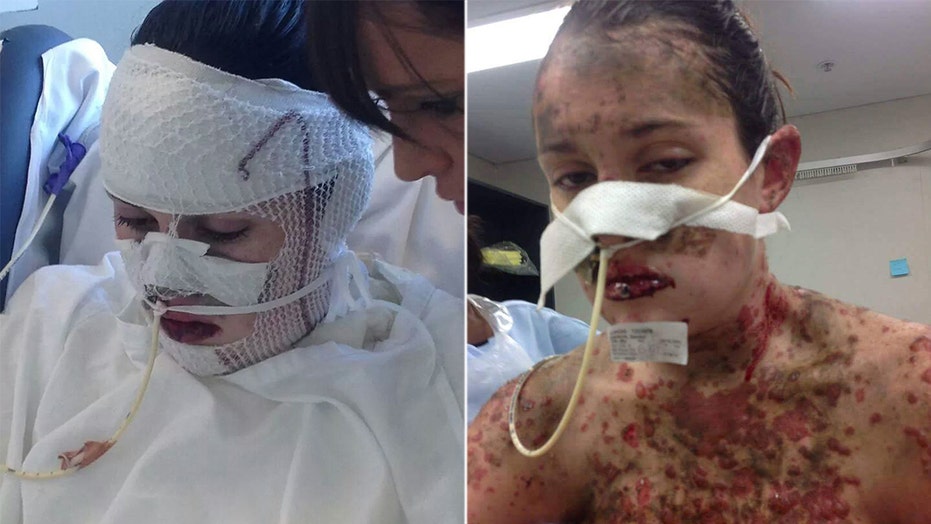 Fox News Flash top headlines for May 29 are here. Check out what’s clicking on Foxnews.com

Warned she would never conceive after being burned alive by a catastrophic reaction to epilepsy drugs, a young woman has revealed her joy at being just weeks away from giving birth to her miracle baby.

Danika Heron's nightmare began when she suddenly developed a mysterious rash just days before her 19th birthday in 2014 – leading to a diagnosis of Stevens-Johnson syndrome (SJS), a severe reaction to medication or infection, which affects the skin, mucous membranes, genitals, and eyes.

Teetering on the brink of death, Heron's skin blistered and fell off, as her parents Carmen Heron, 48, and Scott Heron, 47, watched in horror, powerless to help their beloved girl.

After three weeks in the hospital, Heron, now 24, of New South Wales, Australia, slowly rallied, but doctors warned that, due to the organ damage and internal scarring SJS had caused, she was probably infertile – leaving the young woman little option but to accept she would never be a mom. 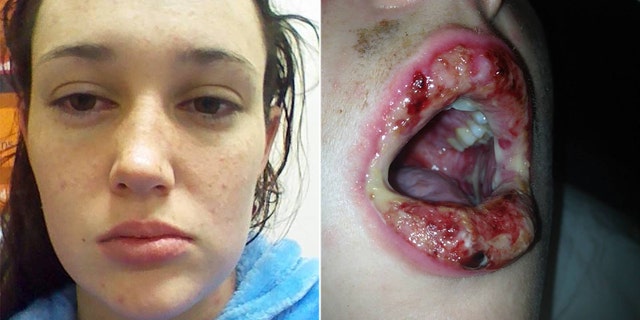 Danika Heron’s reaction started as a rash, which was allegedly mistaken for chicken pox or herpes before a doctor recognized the seriousness of her condition.
(PA Real Life)

Then, in December 2018, against all odds, to her delight Heron discovered she was pregnant with a baby boy, which her mom has dubbed a "miracle."

“We call Danika our warrior, and her little boy our miracle," Carmen Heron, who is speaking out on behalf of her daughter, who is now legally deaf because of SJS, said. “I get emotional even thinking about it. I’m just so excited for her. She is still dealing with the aftermath of SJS now, and I do worry and think, ‘Is this the life she’s going to have?’ But now, it’s not – she’ll have a new life as a mum.”

For Heron, who was an apprentice chef at a top Sydney restaurant when she became ill, but can no longer work, life changed forever in early 2014, when she was diagnosed with epilepsy.

Right away, she was placed on two drugs commonly prescribed to help manage seizures – levetiracetam, more commonly known as Keppra, and lamotrigine, sold under the brand name Lamictal. 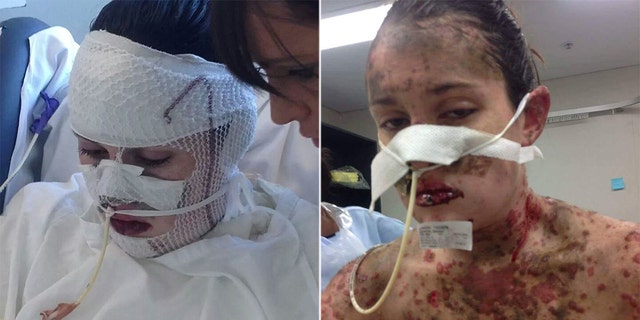 It took three weeks in the hospital before her condition started improving, although she still deals with lasting hearing loss and PTSD from the ordeal.
(PA Real Life)

While serious side effects are extremely rare, both drugs carry the risk of triggering a severe cutaneous adverse reaction -such as SJS – according to The National Institute for Health and Care Excellence (NICE).

At first, Heron appeared to be responding well to medication, until a pinprick-like rash appeared in May.

“I knew right away that it was an allergic reaction, and so I took her to the doctor and asked them to change the medication she was on," Cameron Heron said. “They did, but it was already too late – the medication that had caused the reaction was in her system.”

Over the next few days, Heron’s rash spread, her lips swelled and her eyes appeared red and sore.

Worried sick, Carmen Heron took her to the doctor's a few more times but, as SJS is so rare, it was simply thought she was suffering from something more common, such as chicken pox or the herpes simplex virus.

But thankfully, by complete chance, she was eventually seen by a doctor who knew a lot about the condition and spotted it right away, officially diagnosing her with a severe form of SJS known as toxic epidermal necrolysis (TEN). 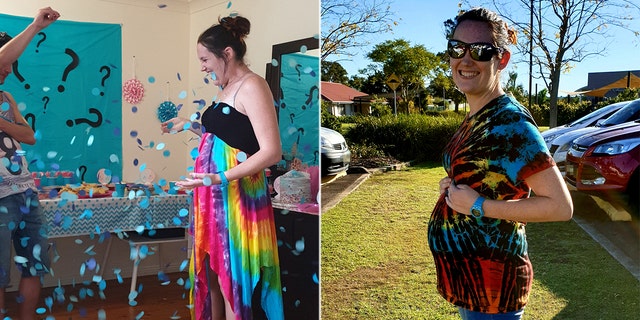 She is now weeks away from giving birth to a baby boy, which doctors had warned might not be possible due to the amount of scarring left behind by SJS.
(PA Real Life)

Adding that doctors have since confirmed that the epilepsy medication sparked the adverse reaction, Carmen Heron said: “I had never heard of SJS before, but I remember googling it and bursting into tears. From there, Danika was admitted to the burns’ unit at Concord Hospital in Sydney."

“By then, she was screaming in agony. She was in so much pain, she was drifting in and out of consciousness," she said. "It was so traumatic. She doesn’t remember much, which, in a way, I’m thankful for as it was so distressing for her.”

As medics sprang into action, working around the clock to save Heron, her mother became terrified she would not make it.

The day after she was admitted to the hospital, it looked as if her worst fears would be realized when Heron suddenly stopped breathing.

“Her throat had swollen so much that she couldn’t breathe," Cameron Heron said. "It was horrendous to watch. She was throwing up all this blood and skin. I really thought she was going to die.”

While doctors managed to stabilize Heron, the condition continued to ravage her body, leaving the skin on her face, chest, back, and arms so burnt that it fell away.

Her lips also swelled to the point where they burst and her mouth became covered in painful ulcers.

“Doctors told us it was one of the worst cases they had ever seen,” Carmen Heron said. “Danika was barely conscious most of the time, and had this button to press to get pain relief when it became too much. Her organs were failing and she had so much internal scarring. She was being burnt from the inside out. Her entire body was bandaged, and when the dressings were removed, her skin came away too.”

But, her journey was far from over, as she was left with side-effects such as the loss of her hair and nails.

Her skin is still healing to this day and she also needs hearing aids as the insides of her ears are so scarred.

As well as the physical fallout, she is also fighting the emotional legacy of SJS,  having suffered from post-traumatic stress disorder.

“We’re still dealing with SJS – it didn’t stop when we left hospital,” Carmen Heron said. “Danika will have days where she feels incredibly low and struggles with flashbacks of being in hospital. Thankfully, if she feels that way, she will phone us right away. We have found that, as a family, it’s good to talk rather than bottle everything up, however difficult those memories might be.”

Another side-effect of Heron's ordeal was the warning by doctors that, due to the amount of internal scarring she had sustained, it was unlikely she would ever conceive.

According to the U.S. Library of National Medicine, SJS and TEN often cause the tissue around the mucous membranes – which line various cavities in the body, including the eyes, ears, mouth, vagina, and urethra, as well as covering the organs – to die.

As a result, women can experience vaginal lesions that lead to painful intercourse, difficulty conceiving, and even infertility.

“The doctors said they could refer her to a gynecologist to run some tests, but she never went – I think she didn’t want to hear the answers,” Carmen Heron said.

But, in December 2018, the Heron family received some news they thought they would never hear.

“Danika rang me crying. I immediately panicked and said, ‘What’s wrong?'" Cameron Heron said. “She replied, ‘I’m pregnant.’ It was so emotional, neither of us could believe it. She’s going to be such an incredible mother. I’m so happy for her and her partner Jordan, who she’s been with for three years."

“She’s classed as a high-risk pregnancy, and has been struggling a lot with hip pain, but we had a scan recently and her little boy, who is due in July, looks healthy and perfect," she said.

Now, as Heron prepares to welcome her miracle boy into the world in a matter of weeks, she and her mother are determined to raise awareness of SJS and TEN.

“It’s terrifying how many people are affected by this worldwide. If sharing our story helps just one person, I’ll keep going," Cameron Heron said. “All we want is for that awareness to be out there. I’d urge people to be aware of their medication and push for tests as soon as they notice a rash. Don’t let yourself get sent home and told it’s nothing. I’m thankful every day that we pushed for Danika to be checked over and over again. If we hadn’t she might not be here now.”

A master regulator of kidney health?

Rhabdomyosarcoma Outcomes in Adolescents and Young Adults Worse Than in Children