In the final part of our series on pill-popping Britain: Why your painkiller could still leave you suffering

Britain is in the grip of a prescription pill epidemic, with millions of us regularly taking them — and becoming reliant on them — for pain.

In fact, we’ve never been prescribed so many — official figures show almost 66 million painkillers were dispensed in 2017, up from 51.5 million in 2007.

Dr Michael Dixon, a GP and the chair of the College of Medicine, a group of health professionals who champion non-drug alternatives, says pills are being used to ‘paper over the cracks in society’. 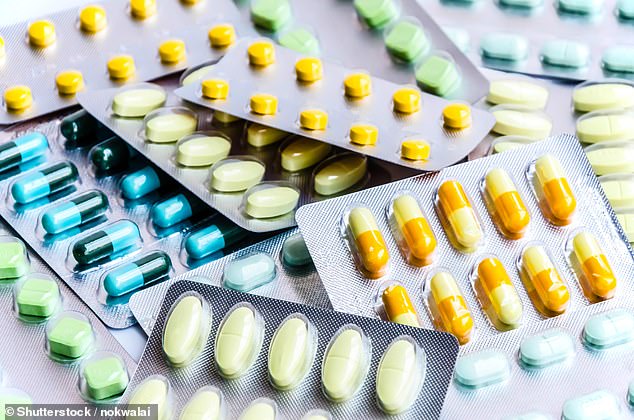 Alarming: Britain is in the grip of a prescription pill epidemic, with millions regularly using

‘It’s horrific,’ he says. ‘Eleven per cent of the population is on drugs for pain, depression, anxiety or sleep. We have created a medicine-addicted society.’

But what concerns some experts is the fact the side-effects of these drugs might outweigh any benefits.

Problems range from patients becoming addicted to opioids, such as codeine, to gastric ulcers and bleeding from long-term use of nonsteroidal anti-inflammatory drugs (NSAIDs), such as ibuprofen and naproxen.

Meanwhile, paracetamol, the go-to drug for everyday aches and pains, simply doesn’t work for many people. Yet long-term use of it has been linked with a higher risk of heart attack, stroke and kidney problems. The biggest risk, however, is accidental overdose.

Here, in the second part of our unique pill audit, the experts reveal the latest thinking on the most commonly prescribed painkillers.

IBUPROFEN AND OTHER NSAIDS

Ibuprofen, diclofenac and naproxen all belong to the group of painkillers known as nonsteroidal anti-inflammatory drugs (NSAIDs).

They work by blocking the enzyme COX-2, which is involved in the production of prostaglandins — compounds produced at the site of an injury which lead to pain and swelling.

The drugs are widely used for pain and to reduce inflammation — particularly with back pain and arthritis. 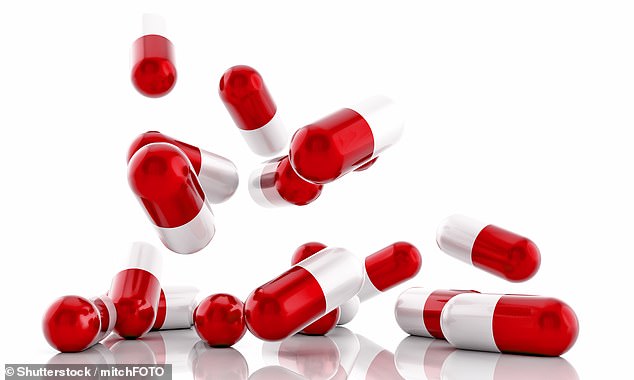 THE CONCERNS: The most well-known side-effect is an increased risk of gastric ulcers and bleeding. This is because prostaglandins protect the stomach lining.

Newer research suggests the pills also increase the risk of heart attacks and stroke in the elderly.

Indeed, since 2015, diclofenac has been prescription-only following concerns about a ‘small but serious risk of cardiac side-effects, including heart attacks, stroke and heart failure’.

And, in 2016, the UK’s drug safety watchdog, the Medicines and Healthcare products Regulatory Agency, reminded medics that the prescription-only etoricoxib may, in high doses, increase cardiovascular events.

WHAT IT MEANS FOR YOU: The good news is that, unlike with paracetamol, ‘there is no risk of accidental overdose — if you take too many, NSAIDs just irritate the stomach and make you sick,’ says Sultan Dajani, a Hampshire pharmacist.

‘You don’t get addicted to them, either, as they don’t affect the brain, unlike opioids.’ The latest NICE guidance says that if an NSAID is needed, 1,200 mg a day or less of ibuprofen, or 1,000 mg or less of naproxen, should be used.

‘NSAIDs must be taken at the lowest possible dose for the shortest amount of time — so just for intermittent flare-ups,’ says Roger Knaggs, a professor of clinical pharmacy practice at the University of Nottingham and a member of the British Pain Society Council.

Sultan Dajani adds that this group of drugs is a ‘useful crutch for common ailments’ in the short term, but must be taken with a proton-pump inhibitor, such as omeprazole, to protect the stomach lining in the longer term.

Opioids work by stimulating receptors in the brain that send signals to block pain and are used to treat chronic problems such as back pain. Some are available in over-the-counter medicines, such as co-codamol (codeine and paracetamol), while others, such as dihydrocodeine, tramadol and fentanyl, are prescription-only.

Around 23 million opioids were prescribed last year in England alone, according to the latest figures. 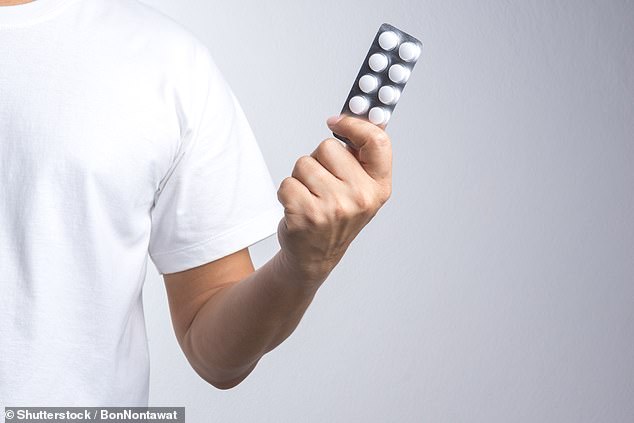 Too much of a good thing? Worryingly, the staggering number of prescription drugs is up from 51.5 million just a decade earlier in 2007

THE CONCERNS: The side-effects of opioids include constipation (they slow down gut transit time), mood swings, sweating and lethargy. However, there are also bigger concerns about their long-term use, including the risk of dependency and the fact that the drugs become less effective, as well as accidental overdose.

Opioids are known for their potential risk of dependency, and this can occur within days, says Professor Knaggs.

This is why codeine packaging, for instance, carries warnings that the pills should not be taken for more than three days.

Furthermore, taking them for longer can make them ineffective.

‘Doctors tend to think opioids are more effective and stronger than other painkillers, but they don’t work for many people,’ says Professor Knaggs.

‘There is evidence long-term use may make people more sensitive to pain, too, by “up-regulating” the body’s pain pathways.’

Other potential problems include accidental overdose, as opioids can depress breathing and cause death.

There were 1,985 deaths related to opioids in 2017 in England and Wales, according to the Home Office.

WHAT IT MEANS FOR YOU: ‘Opioids are useful for pain after surgery or trauma, such as breaking a leg, or in end-of-life care, says Professor Knaggs. ‘They may also be taken short-term for flare-ups of a chronic pain condition.’

But avoid taking them in the long term.

This is an older-style antidepressant that’s also prescribed for nerve pain. It works by increasing levels of certain chemicals in the brain which switch off pain signals.

THE CONCERNS: The authoritative Cochrane Review in 2015 found amitriptyline provided pain relief in only one in four people — and it can cause side-effects such as drowsiness, confusion, nausea and dizziness.

More concerning are its effects on the brain chemical acetylcholine, important for memory.

A 2015 study in the Journal of American Medicine found that other drugs that target acetylcholine (called anticholinergics) raised the risk of dementia.

Dr Chris Fox, a clinical reader in psychiatry at the University of East Anglia and a leading researcher into anticholinergic drugs, recently presented work that showed an association between anticholinergics and brain tissue loss.

He found ‘there were strong links with amitriptyline,’ as he told Good Health. ‘These drugs may accelerate dementia and could tip you into dementia.’

WHAT IT MEANS FOR YOU: NICE guidelines now recognise the risks of anticholinergics in people with dementia and advise minimising their use.

‘Amitriptyline does need to be taken for long periods to have an effect but, if it is not working for your pain, talk to your doctors about the balance of risks and benefits,’ says Professor Knaggs.

Mainly used to treat nerve pain, this class includes gabapentin and pregabalin. They’re thought to block pain signals by acting on a receptor on the nerves that signal pain to the brain.

HOW PILLS MAY NOT BE THE ANSWER

Experts increasingly believe that non-drug alternatives could be more effective. These may include gym-based exercise — the idea is that strengthening muscles better supports joints and that this, in itself, can reduce pain.

‘Conditions such as osteoarthritis are normal changes to the body — in most cases, it’s only because we’ve become sedentary and fat that it’s a problem,’ says Dr Alastair Dickson, a GP in Yorkshire and trustee of the Primary Care Rheumatology Society. ‘We’re over-medicalising people. They need to take exercise and lose weight — popping a painkiller will not solve all their problems.’ Glasgow GP Dr Des Spence adds: ‘In our practice, we provide non-drug alternatives, such as personal trainers and psychological therapies. We have to get patients away from taking painkillers long-term.’

Dr Martin Johnson, a pain specialist at the Royal College of General Practitioners, says that while ‘painkillers are effective in the short term, nothing really works long-term’ and GPs need resources to provide non-drug alternatives.

He adds: ‘We can’t cure chronic pain, but we can manage it with intermittent use of drugs for flare-ups and self-management techniques.’

There were 12 million prescriptions for these two drugs in 2017 and an estimated 2 per cent of the population now takes them.

THE CONCERNS: GABA drugs are the latest group of painkillers to cause concern. The Home Office recently announced they would be reclassified as class C drugs from April 2019, with stricter rules on how they’re prescribed.

Research has also shown they are ineffective in many people.

A Cochrane Review last year concluded there was ‘no good evidence’ gabapentin at the average doses of 1,200 mg to 2,400 mg reduces pain in fibromyalgia.

Another 2017 study published in PLOS Medicine concluded that evidence ‘demonstrates significant risk of adverse effects without any demonstrated benefit’.

Professor Knaggs says: ‘Gabapentinoids are being massively overused, yet only give pain relief to a small number of people — and there are some conditions, such as back pain, for which they’re not effective at all.’

Side-effects include dizziness, insomnia, anxiety, diarrhoea and, more rarely, convulsions. They can also induce a type of euphoria that make them liable to abuse. People prescribed them have reported dependency and unpleasant withdrawal symptoms, too.

Dr Des Spence, a GP in Glasgow, believes doctors — pain specialists and GPs — owe their patients an apology for prescribing GABA drugs: ‘Patients have found themselves inadvertently dependent on GABA drugs, which they took in good faith, but it has had a very negative impact on their lives.

‘It’s another situation where the medical profession has used too many medicines for too long without scrutiny.’

WHAT IT MEANS FOR YOU: Professor Knaggs says: ‘We know these drugs don’t work for a lot of people so, if you are not getting any relief, talk to your GP or pharmacist for advice. You may need a different type of pain relief.’

Australia falls back to zero COVID-19 cases after hotel infection