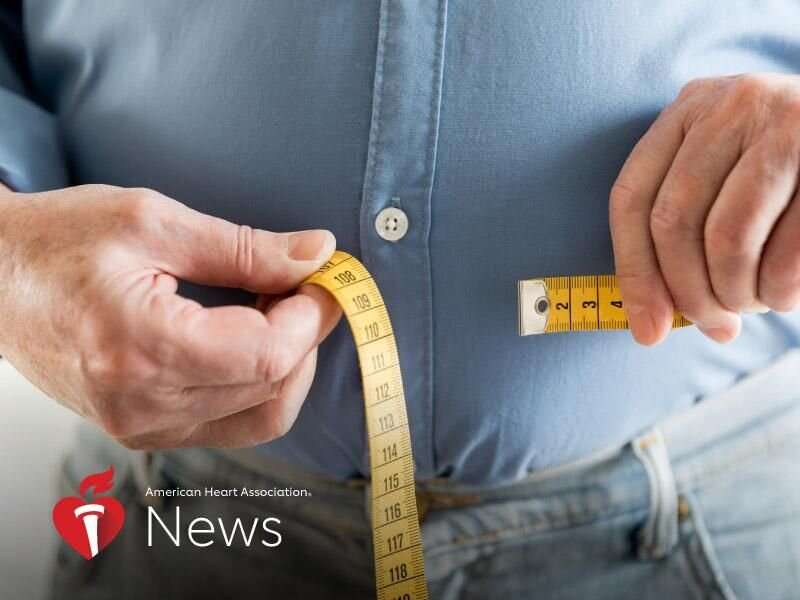 Body mass index may be more helpful in predicting the risk of a common type of irregular heartbeat in women, while waist size may better predict that risk in men, new research suggests.

The link between obesity and atrial fibrillation, or AFib—when the heart beats irregularly and often too fast—is well established. But researchers wanted to understand the extent to which body fat distribution might predict AFib risk among men and women.

The researchers analyzed BMI, waist circumference and electrocardiogram data gathered between 2008 and 2013 from more than 2 million older adults in the U.S. and United Kingdom who didn’t have cardiovascular conditions, including heart failure and stroke. The study’s lead author, Dr. Michiel Poorthuis of University Medical Center Utrecht in the Netherlands, described it as “probably the largest study of its kind to date.”

About 12,000 participants—0.6% – had AFib. After adjusting for variables such as a history of high blood pressure, diabetes and smoking, the researchers found both higher BMI and a bigger waist were associated with an increased risk of AFib in men and women.

But there was a stronger connection between BMI and AFib risk among women, while waistline seemed a greater predictor in men. For women, adding BMI to the calculation improved the ability to predict AFib by 23% compared to a 12% improvement using waist size. In men, however, waist size came out on top, with a 30% improvement in predicting AFib versus 23% using BMI.

According to the National Heart, Lung, and Blood Institute, normal BMI is defined as below 25, and women with a waist size greater than 35 inches and men with a waist larger than 40 inches are at higher risk for heart disease and Type 2 diabetes.

Dr. Richard Bulbulia, co-senior author of the analysis published Thursday in the Journal of the American Heart Association, said the results bolster advice to maintain a healthy weight—and point to the next research question.

“What’s really exciting is the question of, can weight loss decrease atrial fibrillation burden in people who have it, or prevent people from developing it?” said Bulbulia, a research fellow in the University of Oxford Nuffield Department of Population Health and a consultant vascular surgeon at Cheltenham General Hospital in the United Kingdom.

The answer to that question could have broad repercussions: AFib, a major risk factor for stroke, is poised to affect an estimated 12.1 million Americans by 2030, according to American Heart Association statistics.

Left untreated, AFib doubles the risk of heart-related death and is associated with a fivefold higher risk of stroke. Some people with AFib have no symptoms, but others experience a rapid heartbeat or skipped beats.

Dr. Matthew Kalscheur, a clinical cardiologist and cardiac electrophysiologist at UW Health in Madison, Wisconsin, said the possible connection between waist circumference and AFib in men was important to consider.

Kalscheur, who was not involved in the new research, said although BMI—a standard measure of overweight and obesity—is routinely recorded and considered by clinicians in the context of AFib risk, waist circumference typically is not.

“The next step is, how do we present that to our patients, and how do we use this data to try to change behaviors that could impact that risk development,” Kalscheur said.

Like Bulbulia, Kalscheur wonders if, for instance, a person without AFib who is older, overweight and has high blood pressure can make behavioral changes to help prevent AFib—and, ideally, prevent stroke.

Dementia symptoms: Four ‘repetitive’ behaviours that could signal you have dementia