The US saw its second lowest number of daily coronavirus deaths since July on Sunday, with just 378 fatalities – but new cases are still trending upward at an alarming rate in at least 11 states.

Wisconsin, for example, had an average 1,435 new coronavirus cases a day as  of Sunday – 78 percent more than the daily average as of the prior Sunday, September 6.

Nationwide, 34,450 new cases of coronavirus were diagnosed in the US on Sunday.

It comes after thousands of Trump supporters flocked to the President’s indoor campaign rally in Las Vegas, Nevada, despite a statewide mandate against gatherings of 50 or more people.

Trump said that he did not believe that the order against mass gatherings indoors applied to his campaign rally, and last week claimed that the US is ’rounding the corner’ of the outbreak.

Wisconsin hit a new record number of cases on Sunday, and is now averaging 1,435 a day, according to the COVID Tracing Project

Even as children return to school and restaurants and bars reopen in once hard-hit states like New York and Florida, top US infectious disease expert Dr Anthony Fauci said he ‘disagreed’ with President’s optimistic assessment, calling data on infections and deaths ‘disturbing.’

And modelers at the Institute for Health Metrics and Evaluation (IHME) now  predict that the US coronavirus death toll will reach 415,000 by January 1. If restrictions to slow the spread are eased, fatalities could climb to 600,000.

‘When we look ahead into the winter with seasonality kicking in, people becoming clearly less vigilant, you know mask use is down, mobility is up in the nation, you put all those together and we look like we’re going to have a very deadly December ahead of us in terms of toll of coronavirus,’ IHME director Dr Christopher Murray told CNN on Friday.

Messaging from the White House and US health officials is anything but united.

After interviews with journalist Bob Woodward revealed that Trump had called the pandemic ‘deadly’ in private while telling the public it was akin to the flu, the president noted during a Thursday press briefing that weekly new cases are now 44 percent lower than they were in July. 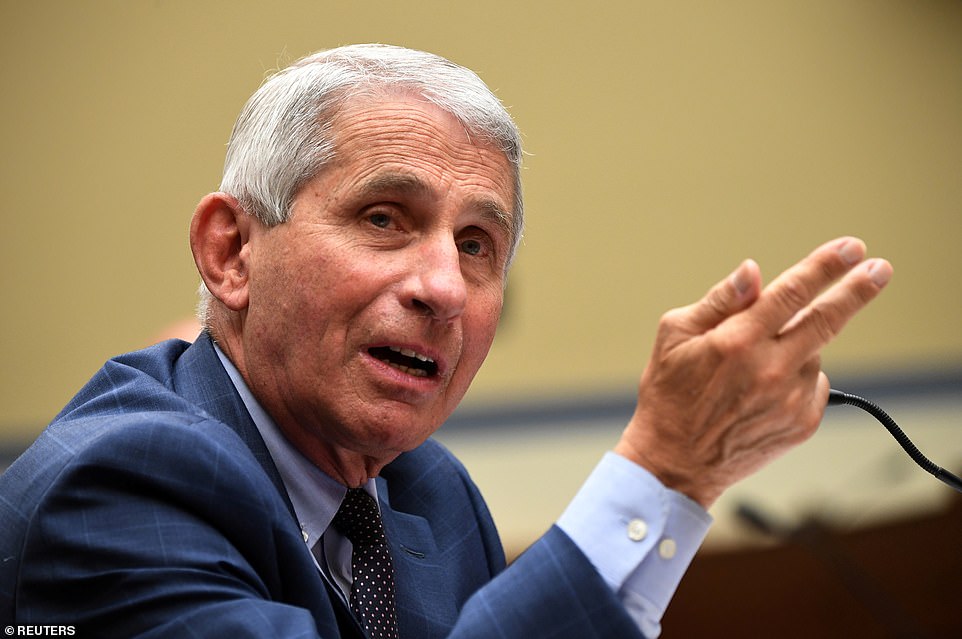 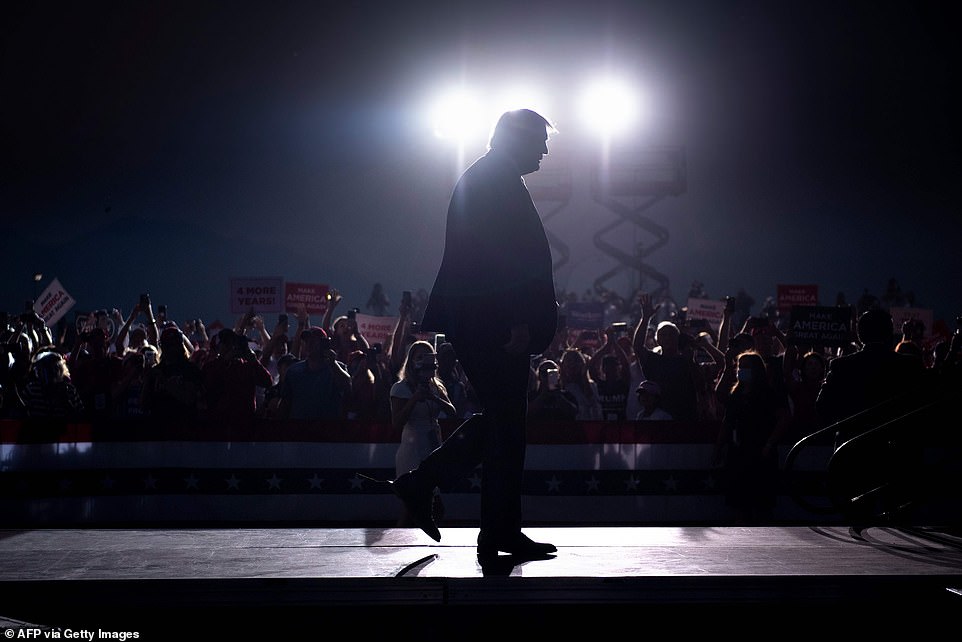 Trump held an indoor campaign rally in Reno, Nevada, flouting the governor’s order against gatherings of more than 50 people

Dr Fauci, director of the National Institute of Allergy and Infectious Diseases, refuted President Donald Trump who said the US was ’rounding the corner’ on Thursday.

‘I have to disagree with that, because, if you look at the thing that you just mentioned, the statistics … they are disturbing,’ Dr Fauci said on MSNBC. ‘We’re plateauing at around 40,000 cases a day. And the deaths are around a thousand.’

Dr Fauci said he hoped the country did not see a spike in cases after the Labor Day weekend as it did after other long holiday weekends since May.

It was important to get those infection rates down before the autumn and winter seasons when people will be spending more time indoors. ‘You don’t want to start off already with a baseline that’s so high,’ Dr Fauci said.

New daily cases of coronavirus have steadily declined since the July peak, when more than 77,000 new infections were recorded in a single day.

Yesterday saw 55 percent fewer new cases compared to the  summer’s peak and, while there have been spikes here and there, the trend since July has indisputably been a downward one.

As the curve has flattened, the hot spots driving increases have shifted dramatically.

The virus spread like wildfire first through New York City, the nation’s most populous metropolitan area. After months of lockdowns to slow the spread, transmission is now low there, but spiking in more rural parts of the country.

North Dakota has become a top hot spot, as the number of new daily cases compared to its small population continues to surge.

Yesterday, 431 new cases of coronavirus were confirmed in the state, the second largest single-day increase in infections since the state reported its first case in March. The North Dakota Department of Health reported one new death yesterday, bringing the toll to 168.

North Dakota has become a top hot spot, as the number of new daily cases compared to its small population continues to surge. 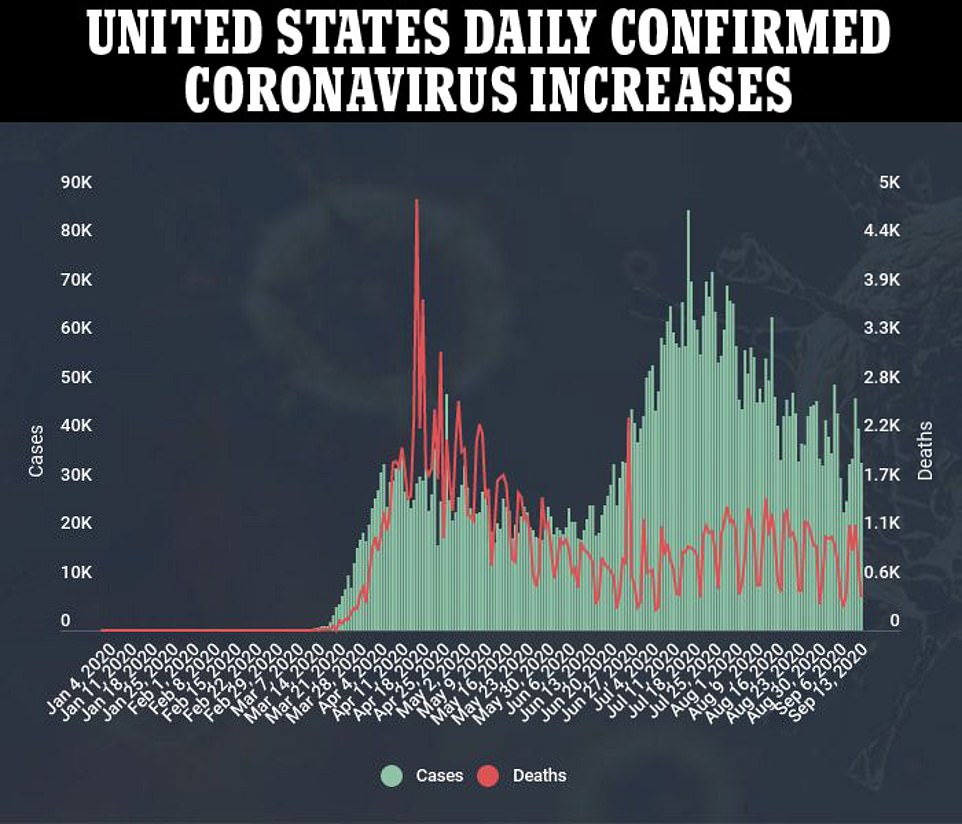 Wyoming’s outbreak is growing at a similarly alarming rate, with more than 44 new cases reported yesterday.

The state is now averaging nearly 30 new cases a day – more than doubling its daily infection rate from a week ago, according to Johns Hopkins’s data tracking.

No new deaths were reported Sunday, and the state’s fatality total remains at 42.

While much of the South has managed to curb the spread of coronavirus, cases are surging in Missouri. Average daily infections there have increased by about 75 percent since last week from 1,003 to 1,753. A total of 102,747 people there have tested positive and 1,705 have died.

Missouri’s average daily infections there have increased by about 75 percent since last week from 1,003 to 1,753 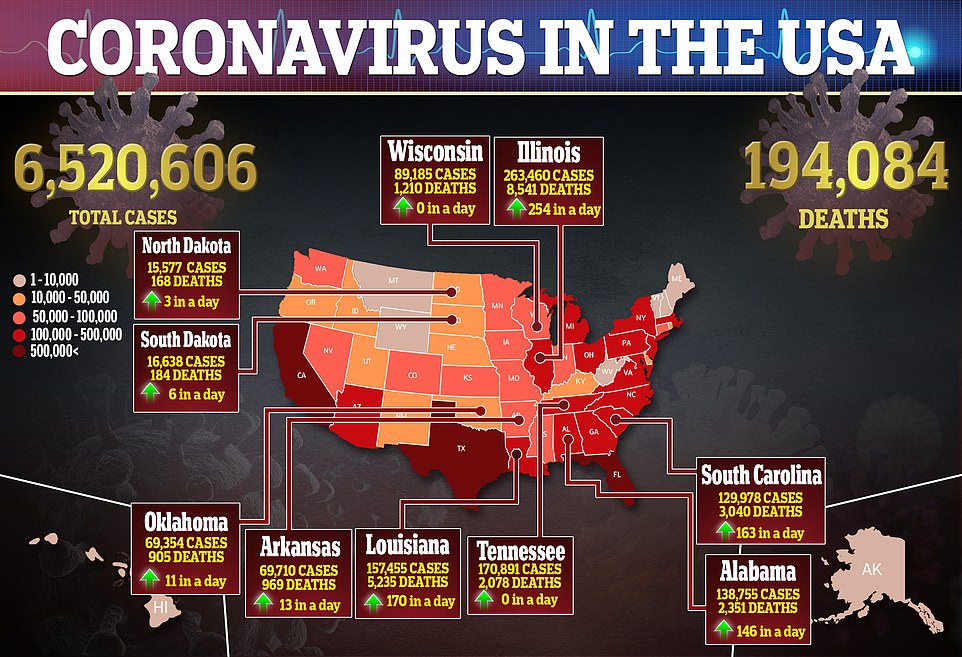 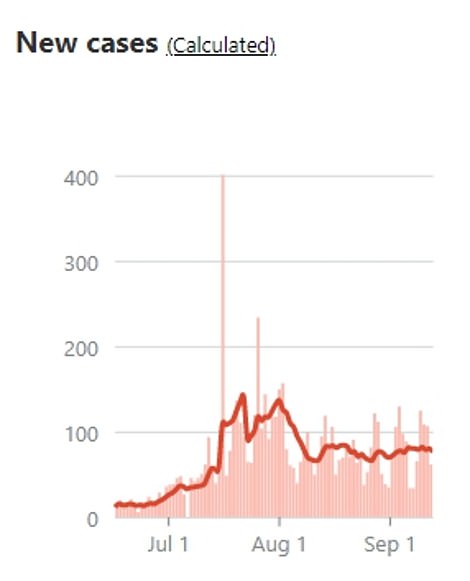 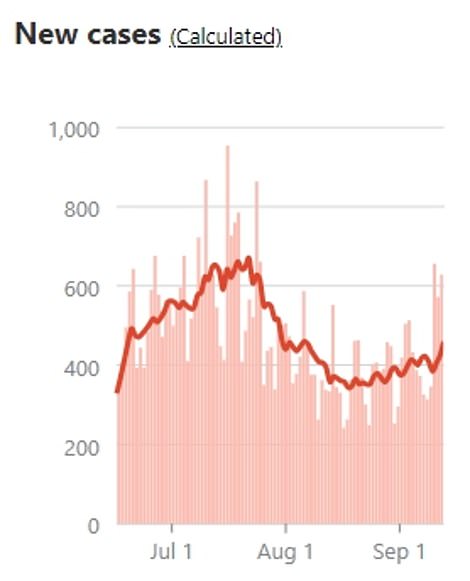 Alaska has not yet reported new data for Sunday, but is averaging 70 percent more new daily infections than it was a week ago (left). The average number of new daily cases in Utah has risen by 56 percent over last week, to about 619 a day (right)

In Utah, 77,875 people have tested positive for coronavirus and 433 have died of the infection. The average number of new daily cases there has risen by 56 percent over last week, to about 619 a day. Yesterday, the state reported 614 new cases.

Alaska has not yet reported new data for Sunday, but is averaging 70 percent more new daily infections than it was a week ago. It is currently averaging 85 new cases a day, compared to about 50 last week. So far, 6,278 Alaskans have caught coronavirus and 44 have died.

The state was one of several states to lift restrictions early – in May – allowing most bars, gyms and restaurants to reopen.

But continued easing of restrictions is exactly what scientists worry could drive up the US coronavirus death toll.

President Trump flouted such restrictions put into place by Nevada Governor Steve Sisolak by hosting an indoor campaign rally in Reno over the weekend, which was attended by thousands.

Sisolak called the President’s rally ‘reckless and selfish’ and slammed him for ‘putting countless lives in danger here in Nevada in a Sunday night tweet.

Asked about the outdoor campaign rallies Trump has resumed before his November 3rd match-up against Democrat Joe Biden, Fauci said they are ‘absolutely’ risky.

‘Just because you’re outdoors does not mean that you’re protected, particularly if you’re in a crowd and you’re not wearing masks,’ he said. 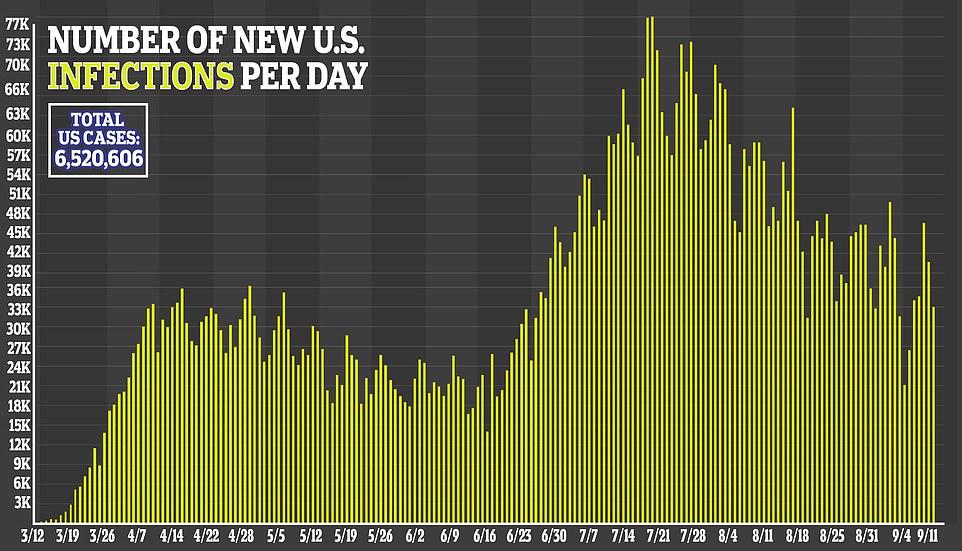 When asked about the ongoing risks of indoor vs. outdoor events, Fauci said, ‘if we want to get back to the normal existence of being able to enjoy being in a restaurant, the best way to do that is to get the community level of infection at the lowest level possible.’

Fauci was also asked about when it might be completely safe to go to movie theaters or other indoor venues after a vaccine had been made available.

‘By the time you mobilize the distribution of the vaccinations and you get the majority or more of the population vaccinated and protected, that’s likely not going to happen until the mid or end of 2021. If you’re talking about getting back to a degree of normality which resembles where we were prior to covid, it’s going to be well into 2021, maybe even towards the end of 2021,’ Fauci said.

Fauci, who has contradicted Trump’s statements about the virus, denies the administration is pressuring him to keep quiet.

‘Anybody that tries to tell me what to say publicly, if they know anything about me, realizes that’s a fool’s errand,’ Fauci said. ‘No one is ever going to pressure me or muzzle me to say anything publicly.’

What is DNA Phenotyping?