Tyrosine kinases are enzymes involved in the transfer of a phosphate group from adenosine triphosphate (ATP) to specific tyrosine residues of proteins within the cell, acting as an “on/off” switch for the function of the protein and being essential to normal regulatory cellular processes. 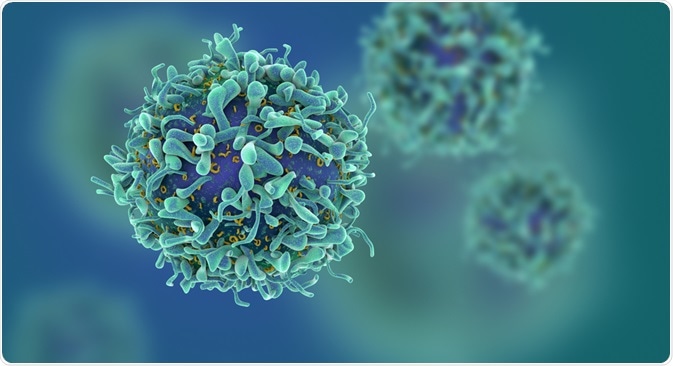 Mutations acquired by kinases during cancer can induce tumor cell proliferation and growth, allow the cells to avoid or delay apoptosis, and promote metastasis through the action of these unusually active or dormant enzymes.

Upon binding with an external ligand, the cytoplasm domain of the receptor tyrosine kinase undergoes autophosphorylation and becomes active, initiating a cascade of signaling pathways that result in responsively altered DNA expression.

Aberrant signaling originating from mutated tyrosine kinases has been shown to be a major driving force in the development and propagation of many cancers, and thus tyrosine kinase inhibitors, which reduce or eliminate the intensity of these signals, are under thorough investigation as anticancer agents.

The fusion is known to cause the expression of three altered forms of tyrosine kinase proteins (BCR-ABL proteins): p210, p230, and p190, each of which is always “on”, and can go on to dysregulate intracellular signaling in a manner that promotes enhanced proliferation and resistance to apoptosis. Generally, one form or another is observed more commonly in certain cancers, and the predominant type can indicate disease type and progression.

Imatinib binds with the ATP binding site of the BCR-ABL proteins, stabilizing the inactive non-binding form, preventing autophosphorylation or phosphorylation of any target proteins. This drug has been popularly used to good effect in patients that have failed to respond to interferon therapy or in the early stages of chronic myeloid leukemia, with up to 90% seeing major cytogenic responses.

Unfortunately, many patients experience relapse once therapy is discontinued as the underlying genetic aberrations are not eliminated by this method unless it can be ensured that every cancer cell is destroyed, and resistance to imatinib has been seen to develop in the form of altered ATP binding sites that significantly lessen the affinity of the drug towards the site on the tyrosine kinase protein.

Several forms of imatinib that maintain affinity towards these changed receptors have been developed and are deployed in specific cases when this protein form is detected.

Geftinib blocks autophosphorylation of EFGR by preventing ATP from binding, inhibiting signal transduction. The response rate of this drug is relatively low, and so it is only utilized in patients known to bear significant detrimental EGFR mutations, though side effects are generally mild.

Remodeling of blood vasculature through and around tumors is known as angiogenesis and is driven by vascular endothelial growth factor (VEGF) tyrosine kinases, which are expressed heavily in the hypoxic environment of solid tumors.

Once activated by binding with specific external ligands and subsequently undergoing autophosphorylation these kinases signal for endothelial cell migration and proliferation, with enhanced permeability and survival potential that define cancers.

Several drugs that target these proteins with the aim of disrupting the vasculature of tumors, resulting in complete tumor destruction by nutrient starvation, have been developed. Semaxinib was the first example of such a drug, developed in 2003 and demonstrating antiangiogenic and antitumor activity.

However, this drug is not clinically available due to subsequently discovered toxicities, and many other VEGF tyrosine kinase inhibitors have fallen similarly short during clinical trials. Inhibition of VEGF signaling is not effective in most cancers, and overall anti-angiogenics appear to have a limited impact on patient survival, and when applied are usually administered in combination with traditional therapies.

Improved specificity and lessened off-target effects could be achieved for VEGF inhibitors using drug delivery vehicles such as nanoparticles, though it will be some time before these technologies are regularly applied in the clinic.

Michael graduated from Manchester Metropolitan University with a B.Sc. in Chemistry in 2014, where he majored in organic, inorganic, physical and analytical chemistry. He is currently completing a Ph.D. on the design and production of gold nanoparticles able to act as multimodal anticancer agents, being both drug delivery platforms and radiation dose enhancers.

Joe Rogan Clarified His Controversial Comments About the Covid-19 Vaccine

Study: Slightly increased blood pressure values note on the brain can be damage!