BREAKING: Trials for EIi Lilly’s coronavirus antibody treatment paused over a ‘potential safety concern’ less than a week after the firm applied for emergency FDA approval of its experimental drug

Eli Lilly has paused trials for its coronavirus antibody drug due to a ‘potential safety concern,’ the company confirmed in a statement to DailyMail.com on Tuesday.

The firm did not reveal how many trial participants were affected or what the nature of the potential risk was. A hold was recommended by an independent safety monitoring board.

Lilly’s trials of the antibody therapy – similar to the Regeneron treatment given to President Trump – are funded by the US government.

The paused trials were testing the drug in hospitalized COVID-19 patients. Eli Lilly asked the Food and Drug Administration (FDA) for emergency use authorization (EUA) of one of the two antibody treatments it developed, LY-CoV555, based on promising early results from trials in COVID-19 patients not sick enough to be hospitalized.

It’s unclear if trials affected by the hold were for this or the company’s other experimental antibody drug, LY-CoV016.

Trial holds are par for the course in the process of testing new drugs and vaccines. They don’t always indicate that the therapeutic or preventive triggered an illness.

The US arm of the trial for Oxford University and AstraZeneca’s vaccine has been on hold since last month, though testing has resumed at all other sites. 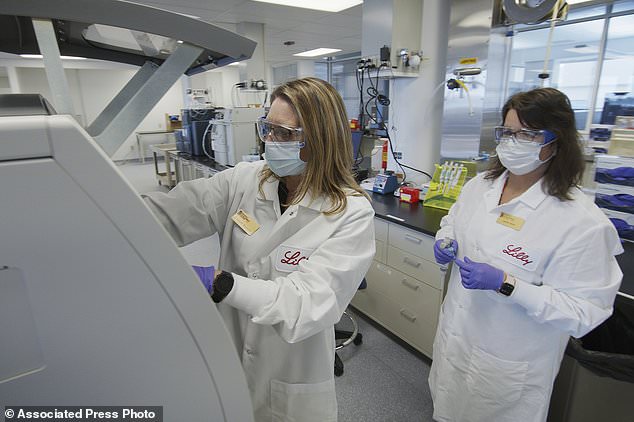 The pharma asked the US government to allow emergency use of its experimental antibody therapy  for coronavirus on Wednesday, less than a week ago. Its application is based on early results from a study that suggested the drug reduced symptoms, the amount of virus, hospitalizations and ER visits for patients with mild or moderate COVID-19.

Eli Lilly and Company announced the partial results Wednesday in a news release; they have not yet been published or reviewed by independent scientists.

Its drug is similar to one that President Donald Trump received on Friday, which is made by Lilly competitor, Regeneron.

These medicines supply concentrated versions of specific antibodies to help the immune system clear the coronavirus that causes COVID-19.

They’re given as a one-time treatment through an IV.

Lilly has already started making one of the two antibodies in its drug, betting that ongoing studies would prove it worthwhile.

It´s not clear if the evidence will be viewed as strong enough for the Food and Drug Administration to grant emergency use authorization, as it has done for the antiviral drug remdesivir. 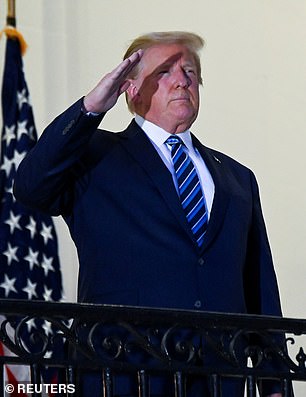 President Trump was treated with an experimental coronavirus antibody drug – but his therapeutic was made by Regeneron, which has not yet sought FDA-approval (file)

The results are an interim look at a mid-stage study in which 112 people received the antibodies and 156 got a placebo.

The amount of virus was significantly lower 11 days later in those given the drug – the main goal of the study. Virus also was lower at earlier time points as well. Symptom scores were better at three days.

About 5.8 percent of patients given placebo required hospitalization or an emergency room visit versus 0.9 percent of those given the antibodies.

Some scientists believe an antibody treatment designed to ‘neutralize’ coronavirus is the best hope for a medicine and, while some lab-made antibodies have shown promise in lab studies, Lilly’s was the first to be tested in humans.

The experimental treatment, LY-CoV555, has been developed through collaboration with privately held AbCellera Biologics, which Lilly partnered with in March.

Lilly’s treatment is an antibody directed against the spike-shaped protein structures of the virus and is designed to block it from locking on to human cells, thus neutralizing the virus.

The drugmaker said the antibody treatment was developed after it was identified from a blood sample taken from one of the first US patients who recovered from the lung illness caused by the new coronavirus.

Lilly said it expects to move into the next phase of testing, studying the potential treatment in non-hospitalized COVID-19 patients, if the drug is shown to be safe. 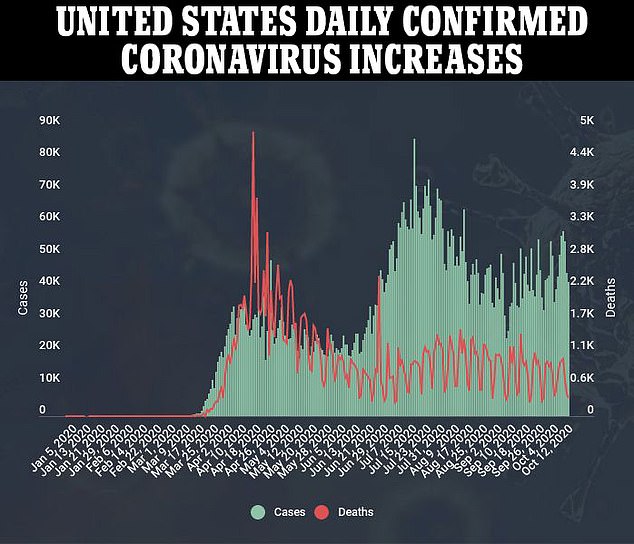 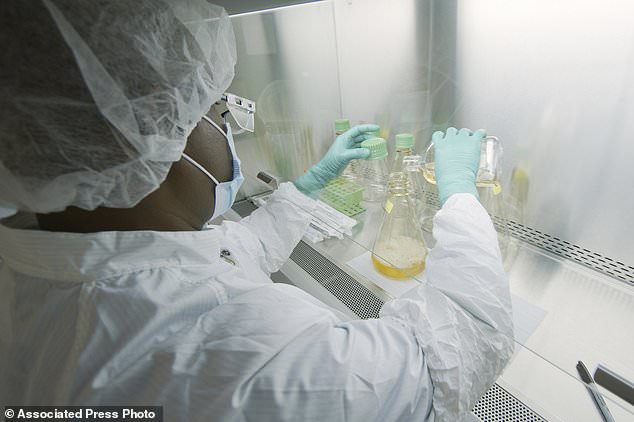 Lilly has been testing a ‘combination’ therapy of two lab-made antibodies to coronavirus, and now believes it has enough data to ask the FDA for emergency approval

Rival Regeneron began clinical studies in June to test its antibody cocktail treatment for the new coronavirus and is aiming to have hundreds of thousands of preventative doses available by the end of August.

Its antibody ‘cocktail’ drug was used to treat President Trump after he tested positive for COVID-19 last week, but the cocktail is still very much experimental and in clinical trials.

Eli Lilly was initially experimenting with just one antibody, but its latest tial data comes from its tests of a combination treatment for COVID-19, two lab-made antibodies, LY-CoV555 and LY-CoV016.

Ultimately, the firm requested an EUA for just one of the two antibody drugs, LY-CoV555. 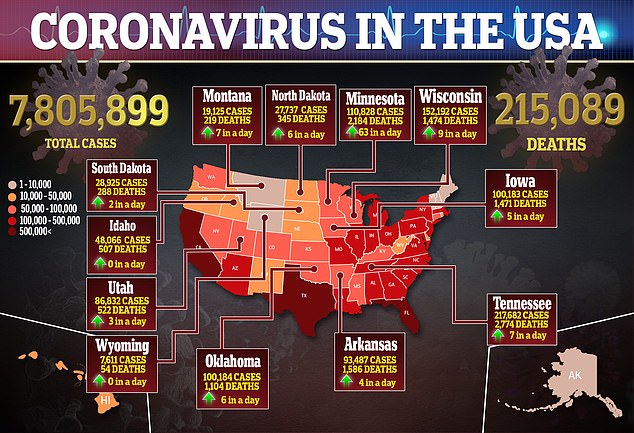 After seven days of treatment with the pair of antibodies, 20.8 percent of patients had lower viral loads than when they’d initiated treatment, compared to just three percent of those who got placebo treatment.

Only 0.9 percent of coronavirus patients who got the treatment had to be hospitalized or needed to visit the ER, compared to 5.8 percent in the placebo group.

‘We believe the data generated to date provide sufficient evidence that both monotherapy and combination therapy may be effective to treat COVID-19 in patients with a high risk for serious outcomes,’ said Dr Daniel Skovronsky, Lilly’s chief scientific officer.

WHAT ARE THE DRUGS TRUMP IS BEING TREATED WITH AND WHAT ARE THEIR SIDE EFFECTS?

President Trump has been given at least three potent drugs since announcing he tested positive for COVID-19 on Thursday night: Regeneron’s cocktail of lab-made antibodies, the antiviral remdesivir, and the steroid dexamethasone.

Two of those medications are still experimental for treating COVID-19, and have given emergency use authorization by the Food and Drug Administration (FDA).

And White House physician Dr Sean Conley admitted on Monday that he would not disclose every single medication that the president is currently receiving (citing HIPAA patient privacy laws, which suggests that Trump himself gave Dr Conley permission to disclose some of his medications, but not all of them).

Remdesivir, dexamethasone and the antibody cocktail are all in ongoing trials – but it’s unclear if anyone besides the US Commander-in-Chief has ever been treated with all three.

Those three drugs are ‘as much as we know [about the president’s treatment regimen] – but I found it all really confusing, based on the reports,’ Dr Mark Poznansky, an infectious disease specialist at Massachusetts General Hospital told DailyMail.com.

When asked if there was any precedent for treating a COVID-19 patient with all three drugs, Dr Poznansky replied, ‘no.’

‘But the individual decisions are based on the individual patient, and all bets are off when you’re dealing with the president, the commander-in chief,’ he added.

‘The implication is that the doctors believe that the risk of using these is outweighed by the potential benefit.’

And while we have some clarity on the potential side effects of each of the  drugs, how they might interact is a mystery, ‘because they just haven’t been used frequently enough…we don’t know about the combination,’ Dr Poznansky said.

But even on their own, the side effects of these drugs could be particularly concerning for the president, considering that the steroid can cause mood swings, confusion and aggression.

The drugs he was treated with and their potential side effects are:

WHEN HE GOT IT: Trump received a single 8 gram dose of Regeneron’s cocktail of lab-made antibodies on Friday.

WHAT IT DOES: REGN-COV2 is a combination of two lab-made versions of antibodies that help block the coronavirus from entering cells.

The hope is that the treatment drives down viral load, keeping it from overrunning the body and sending the immune system haywire, and preventing the infection from becoming severe.

WHAT THE DATA SAYS: REGN-COV2 is still in early trial phases, but the first data from its clinical trial found that it dramatically lowered viral load within a week and cut recovery time in half in patients that weren’t sick enough to be hospitalized.

Regeneron has not yet studied the drug in severely ill patients.

THE POSSIBLE SIDE EFFECTS: The main concern is these types of treatment occasionally trigger ‘antibody-dependent enhancement,’ which means the intended therapeutic actually helps the virus invade cells.

So far, the trials don’t suggest that REGN-COV2 is causing this phenomenon.

WHEN HE GOT IT: President Trump was given his first dose of a five-day treatment course on Friday evening, after he was transferred from the White House to Walter Reed National Medical Center.

He has since received his second and third dose of the drug.

WHAT IT DOES: Remdesivir is an antiviral therapy originally designed to treat Ebola.

Scientists are not entirely sure why, but it helps to prevent coronavirus from making more copies of itself.

WHAT THE DATA SAYS: Late-stage clinical trials of remdesivir found that patients treated with the drug were more likely to recover within 11 days than those who did not get the drug.

Their survival odds were about 40 percent better. In May, the drug became the first to get emergency use authorization from the FDA for treating severely ill patients. That approval has since been expanded to any hospitalized patients.

THE POSSIBLE SIDE EFFECTS: It can cause nausea, vomiting, chils, sweating or light-headedness. The drug also may harm liver function, meaning that patients have to be closely monitored.

There was some suggestion the Trump’s liver and kidney function were suboptimal last night, but Dr Conley said Monday the president was just ‘dehydrated.’

DEXAMETHASONE, THE $6 STEROID WITH COMMON PSYCHIATRIC SIDE EFFECTS

WHEN HE GOT IT: The president got a dose of dexamethasone on Saturday after he developed a high fever and his blood oxygen levels dropped below 94 percent on two occasions.

WHAT IT DOES: Dexamethasone is a cheap steroid known to tamp down inflammation. It’s already approved for use in other conditions in the US.

WHAT THE DATA SAYS: Although it hasn’t yet been given emergency approval in the US, dexamethasone is the most promising treatment yet for coronavirus.

For that reason, many doctors were alarmed to see President Trump treated with the drug because using it suggested either that he was very sick, or that doctors were taking a risk in giving it to him early.

These mood changes include aggression, agitation and confusion.

‘Steroids are always very dangerous medications to use,’ Dr Edward Jones-Lopez, an infectious disease specialist at the University of Southern California in Los Angeles, told Reuters.

‘That is why it (dexamethasone) is used in severe to critical patients… There can be neuropsychiatric side effects. These are medications that we use very, very carefully.’

High blood pressure: Sprinkle these three items on your porridge to lower your reading

Next step towards replacement therapy in type 1 diabetes

Extroverts enjoy four key advantages according to science; here they are