Transgender men are still fertile enough to get pregnant after a year of hormone therapy, scientists claim.

This reduces how much female sex hormone, oestrogen, is in the body – but the ovaries may still be working after a year of the treatment, research has found.

The scientists said they could even work ‘to a degree that may allow reproduction’ but didn’t indicate how long it could take for the ovaries to shut down.

A 28-year-old trans man from Texas recently revealed his own shock when he became pregnant after living as a man for more than six years. 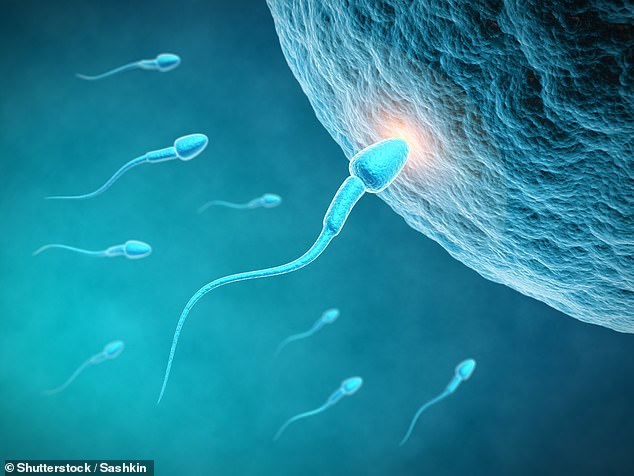 Trans men who transitioned from being a woman may still be able to get pregnant even a year after taking testosterone injections, scientists say (stock image)

Using complete results from 32 of them, all of whom were aged between 17 and 40, they found their female hormones remained in the fertile range for women.

‘Our research shows for the first time that after one year of testosterone treatment, ovary function is preserved to a degree that may allow reproduction,’ said the study’s lead investigator, Yona Greenman.

‘This information is important for transgender men and their partners who desire to have their own children.’

The testosterone injections reduced the participants’ levels of Anti-Mullerian Hormone (AMH), which signals how many eggs a woman has.

But for the first year the trans men still had enough of the hormone to signal they were fertile enough to get pregnant.

It is not clear what their AMH readings were, but between 1ng/ml and 3ng/ml is considered normal, according to the Reproductive Medicine Associates of New Jersey.

Less than 0.6ng/ml is considered ‘low’ and could impact fertility.

Only men who haven’t had sex-change surgery would still be able to get pregnant, and they’d have to conceive the normal way – through vaginal sex with a biological man.

The researchers admit their study was small, with useable data from only 32 people, but said scientific studies of this kind are rare.

They revealed their findings at the Endocrine Society’s annual conference in New Orleans on Saturday.

The British Government doesn’t know how many transgender people are in the UK, but estimates the figure is between 200,000 and 500,000 – up to 0.75 per cent of the population.

A study of 98 trans women, published in the journal Endocrine Practice, found only a quarter had managed to get their testosterone levels into a female range.

The same proportion hadn’t been managed any ‘signficant suppression’ of their male hormones at all.

Wyley Simpson, 28, was shocked to find out he was pregnant in February 2018 after living as a man since he was 21.

Mr Simpson, from Texas, began taking testosterone therapy in 2012 and had his breasts removed in 2013, but still has a vagina and female reproductive organs.

He became pregnant after having unprotected vaginal sex with his fiancé, Stephen Gaeth, 28, and gave birth to Rowan via c-section in September last year.

Mr Simpson claims doctors told him he wouldn’t be able to fall pregnant because of the therapy and he had stopped having periods. 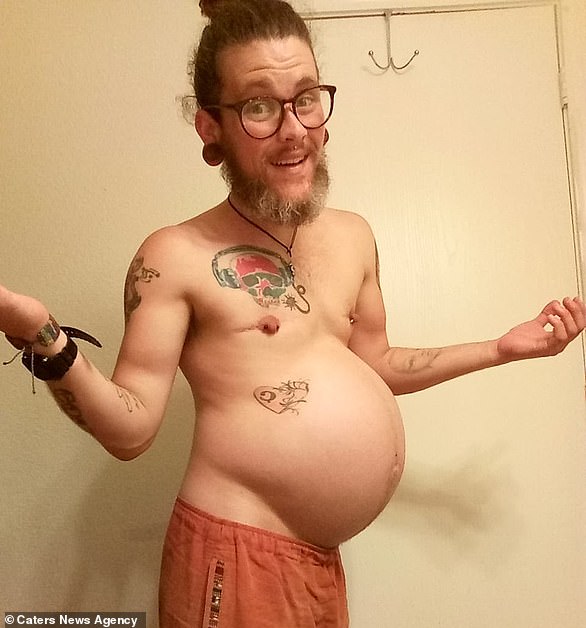 Wyley Simpson, 28, began transitioning to male from female at the age of 21 but, despite taking testosterone therapy, the couple discovered he was pregnant in February 2018

Although they initially did not feel ready to become parents, the couple followed through with the pregnancy.

He said: ‘Rowan is amazing, he made all of the mental and physical pain completely worth it.

‘Now myself and Stephan are just revelling in fatherhood and can’t wait to continue our journey as a family.’ 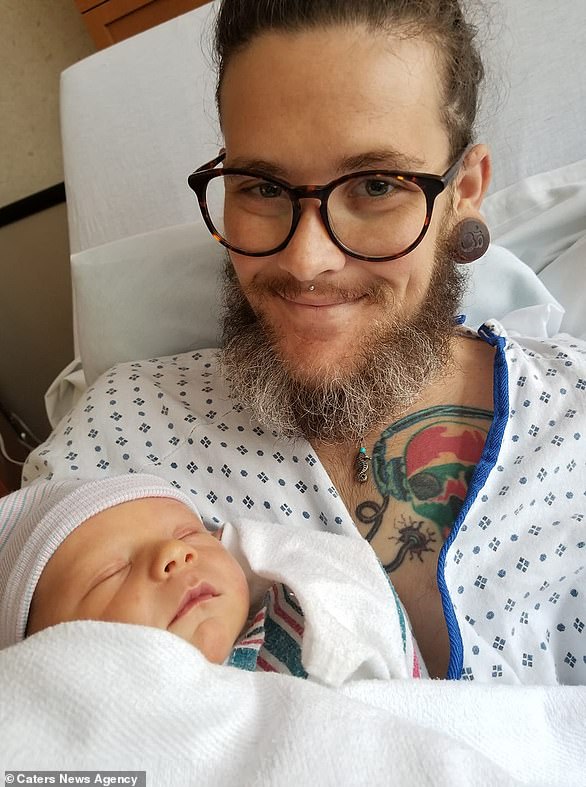 In September 2018, Mr Simpson gave birth to the couple’s 7lb 5oz son, Rowan, via emergency C-section, and admits all of the comments were worth it- but he wouldn’t go through it again

But the abuse and judgement from the public has put Mr Simpson off ever having being pregnant again and he intends to have sex-change surgery in the future.

He said: ‘It’s not every day that someone sees a pregnant man walking down the road, so we received a fair amount of abuse.

‘I would be told that I’ll never be a man, “men don’t carry babies” and everyone called me “it”.’

Vaccinations: Why preventative action for diseases in later life is VITAL

Sunburn: One food that could ‘help with blistering’ – ‘Works as an exfoliant’, says expert