The best-selling teeth whitening kit on Amazon contains an illegal and dangerous chemical, MailOnline can reveal.

The poisonous chemical has been banned by the EU for cosmetic use for nearly a decade as studies have shown it can damage fertility and harm unborn babies.

The product is number one in Amazon’s teeth whitening kit section and has reviews from more than 800 people with an average 4.5 out of five stars.

Experts warn the use of the chemical in such a popular product is ‘very serious’ and people take a ‘big risk’ using it. 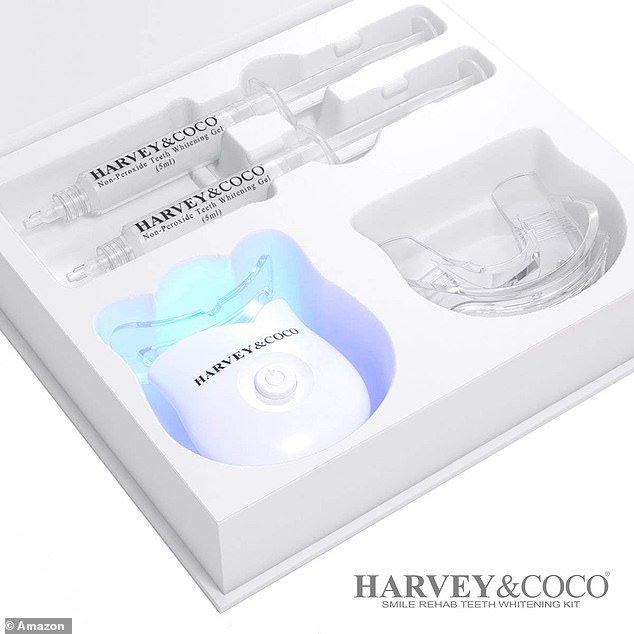 The Harvey & Coco Smile Rehab Teeth Whitening Kit is advertised on Amazon as containing sodium perborate, which is a chemical the European Commission banned from being used in cosmetic products in 2010 – one expert said using it is a ‘very serious’ issue

‘It is very serious for something this popular to contain this chemical,’ Dr Richard Marques, of Wimpole Street Dental in London, told MailOnline.

‘This should not be contained in any products sold in the UK.

‘There is a big risk in buying and using kits like this because sodium perborate monohydrate may damage the enamel permanently.’

The European Commission’s Scientific Commission on Consumer Safety banned the use of sodium perborate in cosmetics in June 2010.

Since then, perborates have been classed as reproductive toxicity category three – meaning there is a risk they can damage fertility.

As well as harming teeth, the chemical can lead to abnormalities in foetuses and low birth weights, according to animal studies.

The National Institutes of Health in the US warns sodium perborate can also cause injuries of the mouth and oesophagus, chemical burns, and gum damage.

It can lead to irritation of the eyes and skin, vomiting, diarrhoea, and can even be deadly in very high amounts.

The whitening kit, sold through Amazon by Sheffield-based firm TTWC Beauty Products Limited, may have been bought thousands of times by unwitting buyers.

There are more than 814 customer reviews for the product, which is currently being sold for £29 with free next-day Prime delivery, with two gel refills costing £17.49. 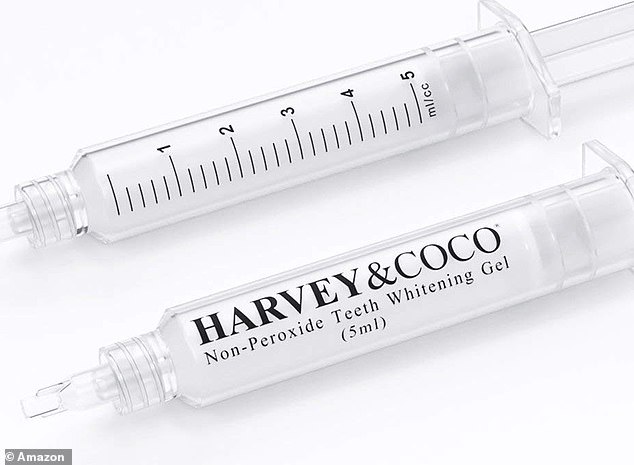 Refills of the gel, which is believed to contain sodium perborate which can damage people’s fertility and unborn babies, are priced at £17.49 for two on Amazon with free delivery

The Harvey & Coco Smile Rehab Teeth Whitening Kit is the best-selling teeth whitening kit on Amazon (screen grab from December 20, 2018), and 72 per cent of the 814 people who have reviewed the product rated it five out of five stars – it is the second most expensive option in the top 10 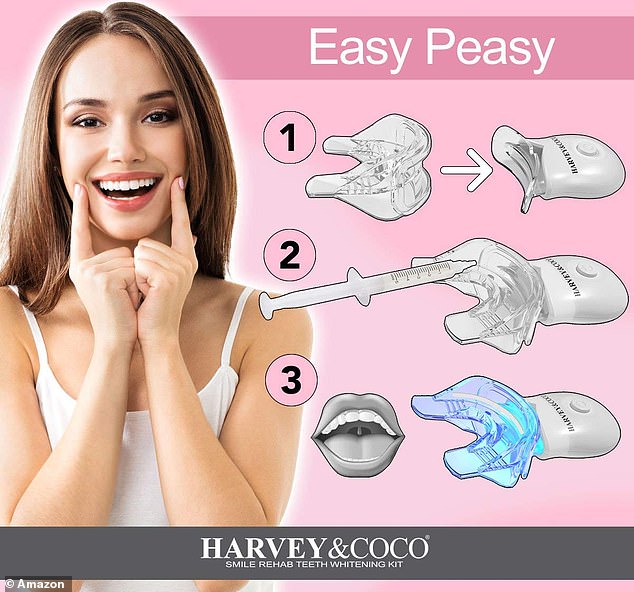 It is the second most expensive product in the top 10 teeth whitening kits, and 72 per cent of people who left reviews on Amazon rated it five out of five stars.

It consists of a gum-shield, blue light and gel, which is listed as having sodium perborate monohydrate among its ingredients.

Dentist and spokesperson for the British Dental Association, Dr Ben Atkins told MailOnline: ‘Tooth whitening needs to be carried out safely and in the best interest of patients by registered dental professionals.

‘Some fraudsters have used dangerous chemicals, including toxic or banned substances such as sodium perborate, that can severely burn gums, or irreparably damage teeth.

WHAT IS SODIUM PERBORATE?

Sodium perborate is a chemical derived from the mineral boron.

It is used to make bleach, laundry detergents, dishwasher tablets and cleaning products.

The chemical was also used in various cosmetic products for years, including hair dyes, teeth whitening and mouthwashes, make-up, deodorants and shaving creams.

However, in 2010 the European Commission’s Scientific Commission on Consumer Safety reviewed research on the chemical and designated it category three toxic to reproduction – possible risk of impaired fertility.

This status means it is prohibited to use it in cosmetic products in European.

Scientific studies found when male rats were exposed to the chemical they ended up with damaged testicles, and pregnant rats gave birth to abnormal babies.

The US’s National Institutes of Health also warns the chemical can cause chemical burns, mouth and gum injuries, skin and eye irritation, vomiting and diarrhoea.

‘The BDA believes that more needs to be done to stamp out illegal teeth whitening.

‘Local trading standards officers should continue to take robust action against suppliers of illegal whiteners, and the public needs to be more aware of the potential harm that can be done to their teeth and gums by using illegal teeth whiteners.’

The kit claims to be peroxide-free, despite sodium perborate breaking down into hydrogen peroxide when it’s mixed with water.

General Dental Council guidance says: ‘Sodium perborate is not safe to use in cosmetic products and was banned from use in in December 2010.’

And it adds: ‘It is classed as a reproductive toxicant, amongst other things.’

The British Dental Association says on its website: ‘Due to serious concerns regarding the safety of sodium perborate-based whitening products, these whitening agents should not be used.’

None of the other top 10 best-selling whitening kits admit to containing sodium perborate.

Dr Marques added: ‘[The chemical] can cause severe destruction of the gums and soft tissues and can be dangerous for the general health if even a small amount is ingested.

‘I have seen many patients who have damage from home kits.

‘Some have damage to the gums, while others have eroded enamel that will never be able to grow back.

‘Some patients also suffer from blotchy patches on the teeth due to the quality of the whitening ingredient.

‘These should be stopped and removed from Amazon in accordance with the regulations. It is up to the online retailers to do this.’

The hair dye Bigen was whisked off Tesco’s shelves in 2016 when it was found to contain sodium perborate, which experts said was toxic when inhaled.

A Trading Standards spokesman said at the time: ‘Sodium perborate is a prohibited substance under the cosmetic products safety regulations because it can cause harm to fertility and unborn children.’

Football-mad Cohen, 6, back on pitch after cancer ordeal