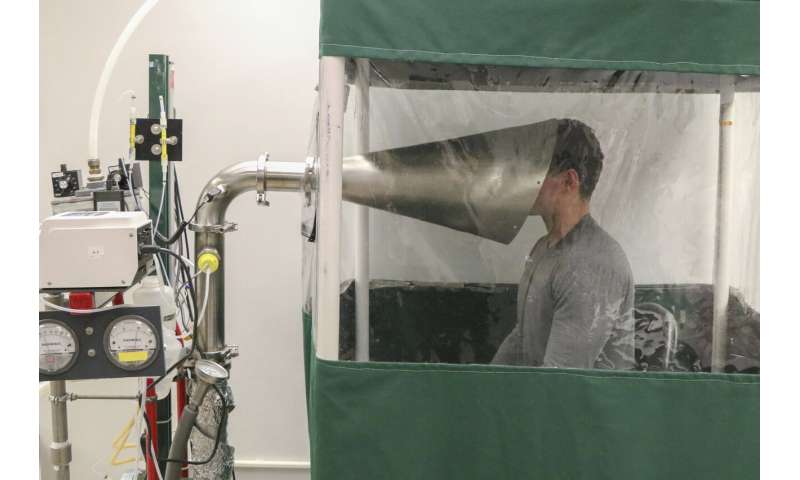 At a University of Maryland lab, people infected with the new coronavirus take turns sitting in a chair and putting their faces into the big end of a large cone. They recite the alphabet and sing or just sit quietly for a half hour. Sometimes they cough.

The cone sucks up everything that comes out of their mouths and noses. It’s part of a device called “Gesundheit II” that is helping scientists study a big question: Just how does the virus that causes COVID-19 spread from one person to another?

It clearly hitchhikes on small liquid particles sprayed out by an infected person. People expel particles while coughing, sneezing, singing, shouting, talking and even breathing. But the drops come in a wide range of sizes, and scientists are trying to pin down how risky the various kinds are.

The answer affects what we should all be doing to avoid getting sick. That’s why it was thrust into headlines a few days ago when a U.S. health agency appeared to have shifted its position on the issue, but later said it had published new language in error.

The recommendation to stay at least 6 feet (2 meters) apart—some authorities cite about half that distance—is based on the idea that larger particles fall to the ground before they can travel very far. They are like the droplets in a spritz of a window cleaner, and they can infect somebody by landing on their nose, mouth or eyes, or maybe being inhaled.

But some scientists are now focusing on tinier particles, the ones that spread more like cigarette smoke. Those are carried by wisps of air and even upward drafts caused by the warmth of our bodies. They can linger in the air for minutes to hours, spreading throughout a room and build up if ventilation is poor.

The potential risk comes from inhaling them. Measles can spread this way, but the new coronavirus is far less contagious than that.

For these particles, called aerosols, “6 feet is not a magic distance,” says Linsey Marr, a leading researcher who is studying them at Virginia Tech in Blacksburg. But she says it’s still important to keep one’s distance from others, “the farther the better,” because aerosols are most concentrated near a source and pose a bigger risk at close range.

Public health agencies have generally focused on the larger particles for coronavirus. That prompted more than 200 other scientists to publish a plea in July to pay attention to the potential risk from aerosols. The World Health Organization, which had long dismissed a danger from aerosols except in the case of certain medical procedures, later said that aerosol transmission of the coronavirus can’t be ruled out in cases of infection within crowded and poorly ventilated indoor spaces.

The issue drew attention recently when the U.S. Centers for Disease Control and Prevention posted and then deleted statements on its website that highlighted the idea of aerosol spread. The agency said the posting was an error, and that the statements were just a draft of proposed changes to its recommendations.

Dr. Jay Butler, CDC’s deputy director for infectious disease, told The Associated Press that the agency continues to believe larger and heavier droplets that come from coughing or sneezing are the primary means of transmission.

Last month Butler told a scientific meeting that current research suggests aerosol spreading of the coronavirus is possible but it doesn’t seem to be the main way that people get infected. Further research may change that conclusion, he added, and he urged scientists to study how often aerosol spread of the coronavirus occurs, what situations make it more likely and what reasonable steps might prevent it.

Marr said she thinks infection by aerosols is “happening a lot more than people initially were willing to think.”

As a key piece of evidence, Marr and others point to so-called “superspreader” events where one infected person evidently passed the virus to many others in a single setting.

In March, for example, after a choir member with coronavirus symptoms attended a rehearsal in Washington state, 52 others who had been seated throughout the room were found to be infected and two died. In a crowded and poorly ventilated restaurant in China in January, the virus evidently spread from a lunchtime patron to five people at two adjoining tables in a pattern suggesting aerosols were spread by the air conditioner. Also in January, a passenger on a Chinese bus apparently infected 23 others, many of whom were scattered around the vehicle.

There could be another way for tiny particles to spread. They may not necessarily come directly from somebody’s mouth or nose, says William Ristenpart of the University of California, Davis. His research found that if paper tissues are seeded with influenza virus and then crumpled, they give off particles that bear the virus. So people emptying a wastebasket with tissues discarded by somebody with COVID-19 should be sure to wear a mask, he said.

Wearing a mask is still important, and make sure it fits snugly. Keep washing those hands diligently. And again, staying farther apart is better than being closer together. Avoid crowds, especially indoors.

Their main addition to recommendations is ventilation to avoid a buildup of aerosol concentration. So, the researchers say, stay out of poorly ventilated rooms. Open windows and doors. One can also use air-purifying devices or virus-inactivating ultraviolet light.

Best of all: Just do as much as you can outdoors, where dilution and the sun’s ultraviolet light work in your favor.

“We know outdoors is the most spectacularly effective measure, by far,” says Jose-Luis Jimenez of the University of Colorado-Boulder. “Outdoors it is not impossible to get infected, but it is difficult.”

The various precautions should be used in combination rather than just one at a time, researchers say. In a well ventilated environment, “6 feet (of separation) is pretty good if everybody’s got a mask on” and nobody stays directly downwind of an infected person for very long, says Dr. Donald Milton of the University of Maryland School of Public Health, whose lab houses the Gesundheit II machine.

Duration of exposure is important, so there’s probably not much risk from a short elevator ride while masked or being passed by a jogger on the sidewalk, experts say.

At a recent meeting on aerosols, however, Dr. Georges Benjamin, executive director of the American Public Health Association, noted that preventive steps can be a challenge in the real world. Keeping apart from other people can be difficult in homes that house multiple generations. Some old buildings have windows that were “nailed shut years ago,” he said. And “we have far too many communities where they simply don’t have access to clean water to wash their hands.”

It might seem strange that for all the scientific frenzy to study the new coronavirus, the details of how it spreads can still be in doubt nine months later. But history suggests patience.

The Upside of Daydreaming