Sometimes in life, we have an epiphany that shakes us so profoundly that transforming our habits becomes inevitable. More often we do battle in the space between the habits we want to cultivate and the habits we have.

Two new books suggest the solution to closing the gap might be found in focusing our attention on a tiny space of time, like 30 seconds or two minutes. 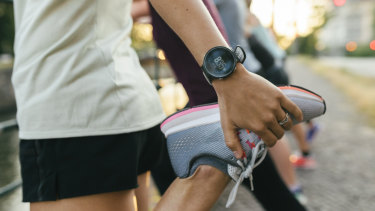 Want to run a marathon? Start with two minutes and then stop.Credit:Getty

“Most everyone wants to make some kind of change: eat healthier, lose weight, exercise more, reduce stress, get better sleep. We want to be better parents and partners. We want to be more productive and creative,” writes B.J. Fogg, director of Stanford’s Behaviour Design Lab, in his new book, Tiny Habits.

But, he adds, there is a “painful gap” between what we want and what we actually do.

While people often blame themselves and a lack of willpower, we are not the problem, Fogg insists: “Our approach to change is. It’s a design flaw, not a personal flaw.”

For instance, we often rely on overrated drivers like motivation and willpower which ebb and flow. Designing our life and our environment, however, does make a difference, says James Clear, author of the New York Times’ best-selling book, Atomic Habits.

The process helps you effectively wire in the behaviours you want so they become habits and grow naturally.

For example, Clear wanted to stop constantly checking his phone, so he started leaving it in another room until lunch each day.

“[Technology is] so frictionless, all you need is a whiff of desire to check and because it’s so frictionless we find ourselves doing it even when we don’t really want it that bad … you check it just cos it’s easy and slightly satisfying, but you just insert a little bit of friction, a little bit of space and you don’t go and get it.”

Conversely, changing our environment to decrease friction makes it easier to cultivate a good habit.

“Motivation rises and falls, some days you feel excited about it, some days you don’t so I like the question of ‘Can I do this habit 98 per cent of the time without fail?’ and if the answer isn’t ‘yes’ to that, then it’s probably too big of a habit to start,” Clear says.

Which is where the "30 second or two-minute" rules come in.

Time pressure, Fogg explains, leads to the “scarcity mindset”: “We believe there will never be enough time, so it becomes an automatic reflex to say 'no' to changes … Thirty minutes of exercise a day? Cooking a healthy dinner every night? Starting a new business? Forget it. Who. Has. The. Time?”

Instead of lamenting the impossibility of change, we can make our lives easier, and create less friction, by starting small: By starting with 30 seconds for instance.

“The process helps you effectively wire in the behaviours you want so they become habits and grow naturally,” says Fogg, who tinkered with his own behaviours to try his theory out. “I did silly things that turned out to be wildly successful, like doing two push-ups after every time I pee. I did seemingly rational things that totally failed, like trying to eat an orange every day at lunch.”

“Tiny allows you to start right now,” Fogg promises. “It meets you where you are – whether your life is in a desperate spiral or you are stressed-out but otherwise fortunate.”

Clear suggests a similar approach, starting with the two-minute rule to dissolve the obstacles that block us as much as 90 per cent of the time.

The secret is to always stay below the point where it feels like work.

“Success is rarely the result of one thing but failure can be,” Clear explains. “In order for a habit to succeed you need a bunch of different things to work together.

“So, for example with an exercise habit, you need to successfully get your exercise clothes on, drive to the gym, get into the gym, know which workout to do, do the exercise … For that habit to fail, it could be any number of things – you forgot your trainers, or the traffic was too heavy, or you don’t have a workout program and you’re not quite sure what to do.”

The two-minute rule cuts down both the complexity involved in a new habit and the commitment required.

“Whatever habit you’re trying to build, scale it down to two minutes or less,” Clear says. So if you want to run a marathon, start by jogging no more than two minutes at a time; if you want to read a book, stop after one page; meditate for just 120 seconds a day or start writing a book by writing a single sentence.

“The secret is to always stay below the point where it feels like work,” he says. “Find a way to master the way of showing up and manage that complexity of life and once it’s part of your new normal you can optimise it.”