A teenage was temporarily blinded for two days and left with pus-filled scabs on her hairline after suffering an allergic reaction to hair dye.

Riley O’Brien, 18, was left ginger after she tried to dye her mousy brown hair blonde.

Before going out with her friends, she used Garnier nutrisse cream permanent dye in dark brown as a ‘quick fix’. She decided against doing a patch test because she had used the box dye before.

But the nursery worker, from Colchester, suffered an allergic reaction that left her with chemical burns. 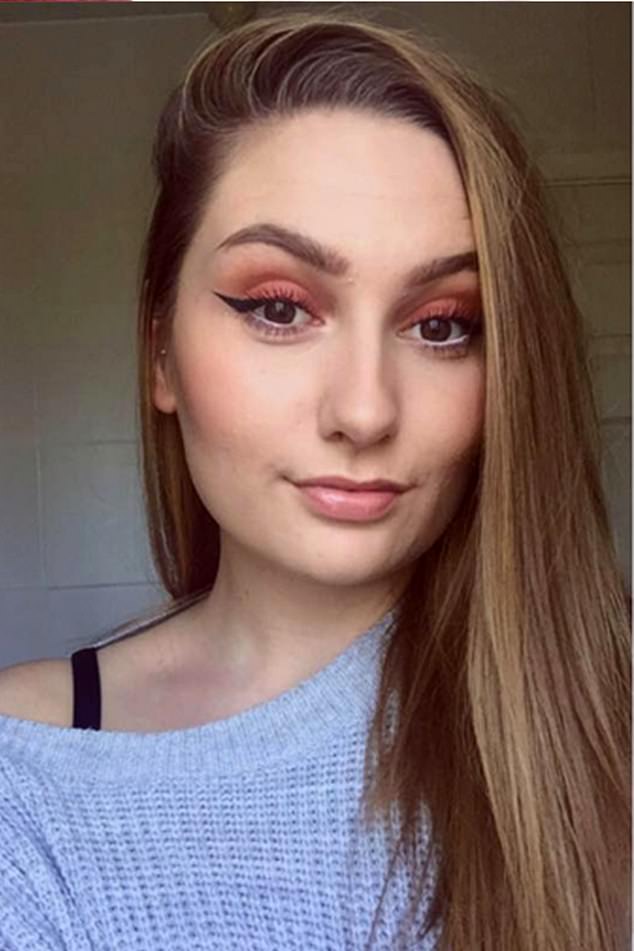 Riley O’Brien, 18, of Colchester, didn’t do a patch test of Garnier nutrisse cream as she’d used the box dye before (believed to be pictured before her reaction) 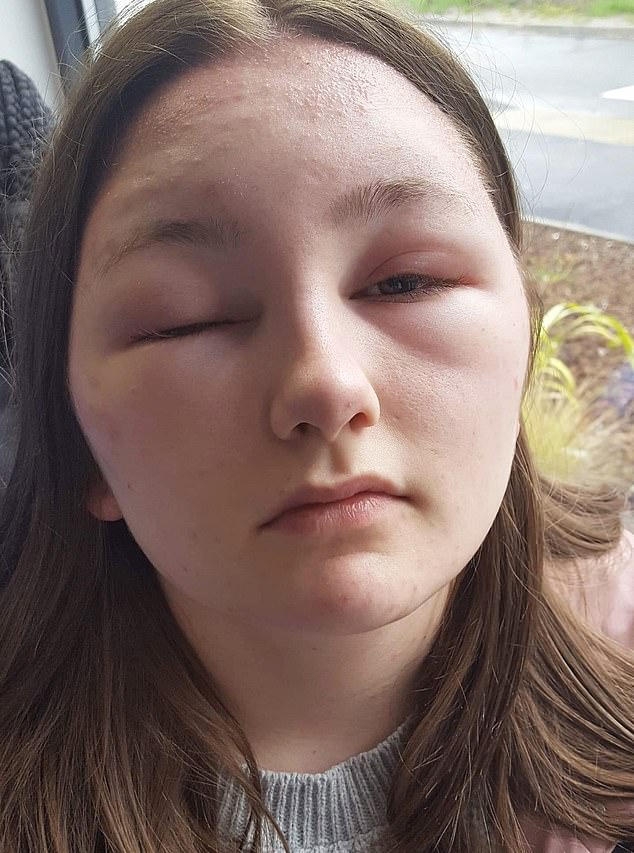 The morning after using the box dye, Miss O’Brien, a nursery worker, woke to her forehead swollen twice the size 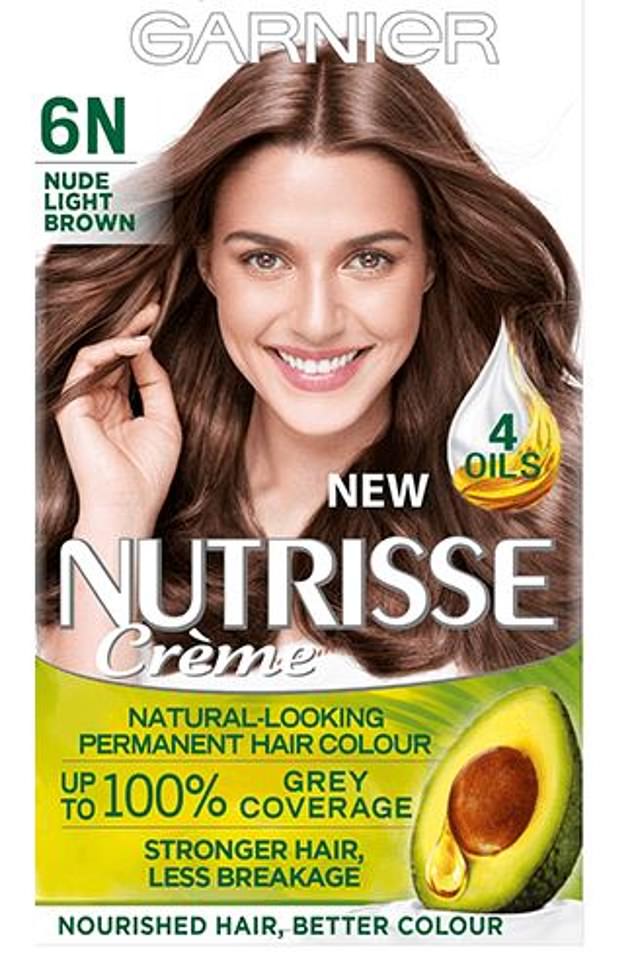 Miss O’Brien used Garnier nutrisse cream permanent dye in dark brown, which she had previously suffered a mild reaction to

WHAT CHEMICALS IN HAIR DYE CAN CAUSE A REACTION?

Colouring products contain a variety of chemicals but phenylenediamine (PPD) is the prime cause of allergic reaction to hair dye.

It is needed for most shades of permanent colour, especially dark shades.

There is a strict limit on the concentration of PPD at a maximum of two per cent in any substance applied to the hair.

Hair dyes containing PPD are safe to use, providing safety instructions are followed.

There must be clear warnings and usage instructions on all packaging.

You’re particularly at risk if you have (or have previously had) a black henna tattoo, which often illegally contains high levels of PPD.

These temporary tattoos should be avoided because the paste often contains high levels of PPD, which can increase the risk of an allergic reaction the next time you’re exposed to it.

Always carry out a patch test before using a permanent or semi-permanent hair dye.

Symptoms of a reaction

If you’re mildly irritated, you may find your scalp, neck, forehead, ears or eyelids become irritated.

The skin may become red, swollen, blistered, dry, thickened or cracked and you could feel a burning sensation.

If you’re allergic to PPD, your scalp and face may feel itchy and start to swell.

PPD may also trigger feeling generally ill. The symptoms may develop hours or even days later.

Miss O’Brien’s face has now returned to normal and she’s urging others to always do a patch test.

Miss O’Brien said: ‘I learnt the hard way to always do a patch test even if you’ve used a product before.

‘I’ll never dye my hair again and, instead, will embrace my natural mousy brown colour.’

Miss O’Brien has dyed her hair regularly since she was 14.

She said: ‘I’ve always done it myself and been careful to do a patch test when I’m using a new box.

‘I’ve dyed it blonde, brown and a jet black. I love experimenting. Thankfully, I’ve never suffered any problems before.

In October 2017, when Miss O’Brien was 17, she bought two boxes of Garnier nutrisse cream permanent dye in dark brown and did a patch test, before dying her hair.

But the day after, her scalp was really tight and unbearably itchy.

She said: ‘I didn’t panic. As I’d done a patch test, I figured it was because of the chemicals in the dye.

‘I washed the dye out and the symptoms stopped.’

Nine months later in July 2018, Miss O’Brien tried to dye her hair blonde but it turned her natural hair ginger instead.

She said: ‘I was ginger for a week, but was due to go out with my mates.

‘So as a quick fix, I used the same box of brown hair dye that I’d used the year before to colour my hair.

‘As I used the box dye before, I decided against doing a patch test.’

Miss O’Brien dyed her hair and went out clubbing that night with her friends.

But the next morning, she woke up at a friend’s house and the top of her forehead had swollen to twice the size.

She said: ‘I panicked and realised I’d had a reaction to the hair dye. I tried to wash the dye out several times but it wasn’t easing the symptoms.

‘I went home and my mum, Paula, 39, was shocked to see how large my face was.

‘But we agreed to hold off before seeking medical attention, in case it got better.’

But later that day, the swelling spread to Miss O’Brien’s eyes and cheeks leaving her face so swollen that she couldn’t open her eyes. 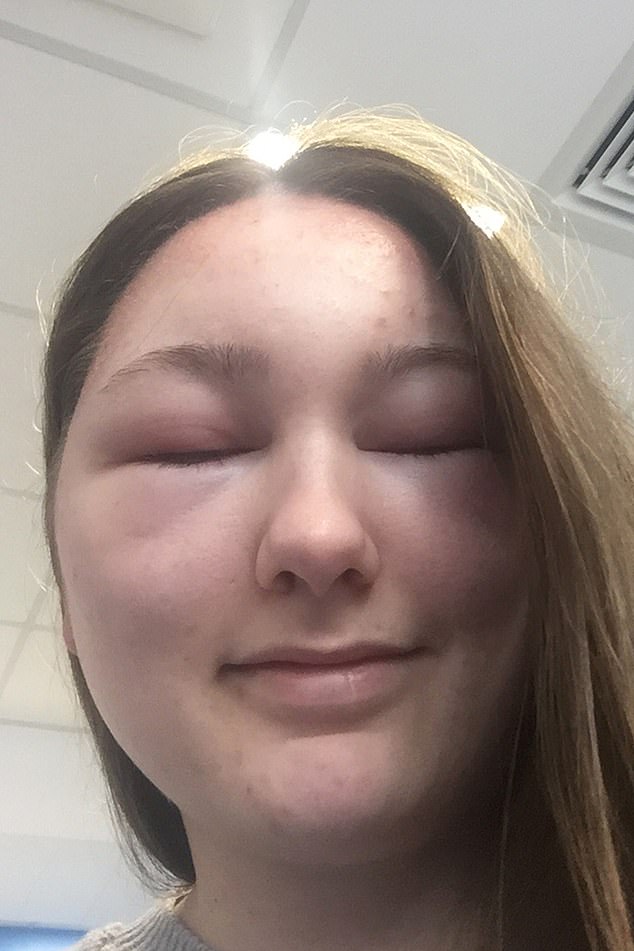 ‘I looked like an alien’: Miss O’Brien’s face swelled to twice the size the day after using a box dye. By the end of the day, she couldn’t open her eyes 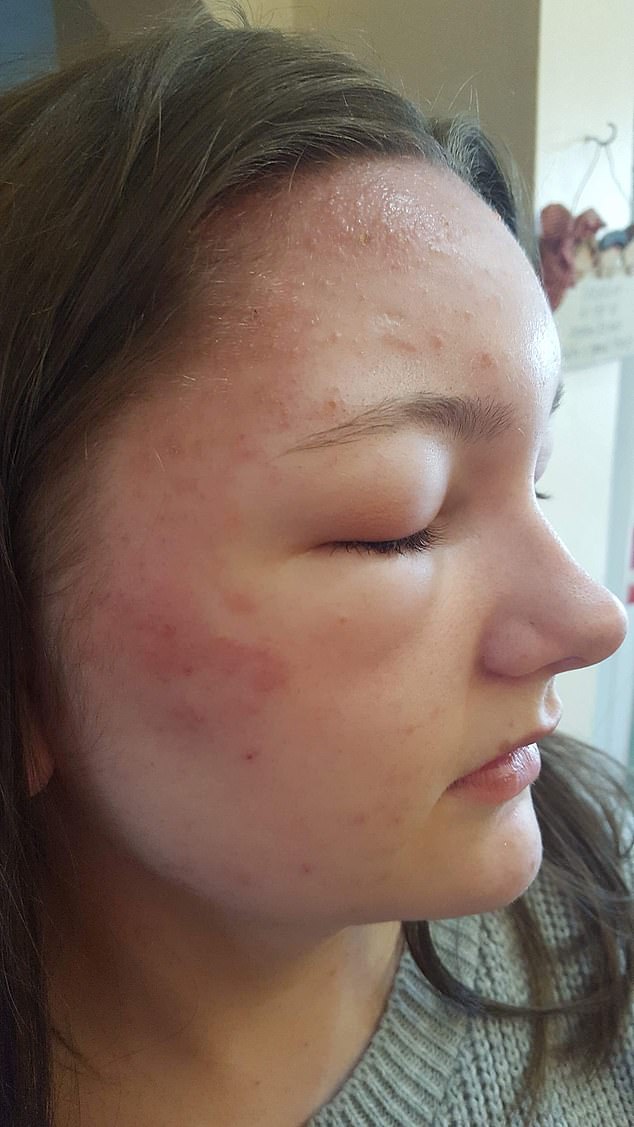 Red scabs developed around Mrs O’Brien’s hairline which were leaking pus. Doctors said the scabs were a chemical burn and that she’d had an allergic reaction to her hair dye

Red scabs had also developed around her hairline which were leaking pus.

She said: ‘It was awful. My head was so itchy, it felt like it was on fire.’

Miss O’Brien went to Colchester General Hospital with her mother, where she had to be guided through A&E as she was temporarily blinded.

‘It was terrifying,’ Miss O’Brien said.  ‘My face looked like I’d been burnt with acid.’

Doctors told Miss O’Brien that the scabs were a chemical burn and that she’d had an allergic reaction to her hair dye.

Most commonly, the chemical paraphenylenediamine (PPD) is the culprit of reactions to hair dye.

Reactions can range from mild irritation in the scalp to an allergic reaction that can potentially trigger serious symptoms throughout the body.

She said: ‘Doctors then prescribed me a stronger medication to help the swelling go down. I was discharged from hospital that day.’ 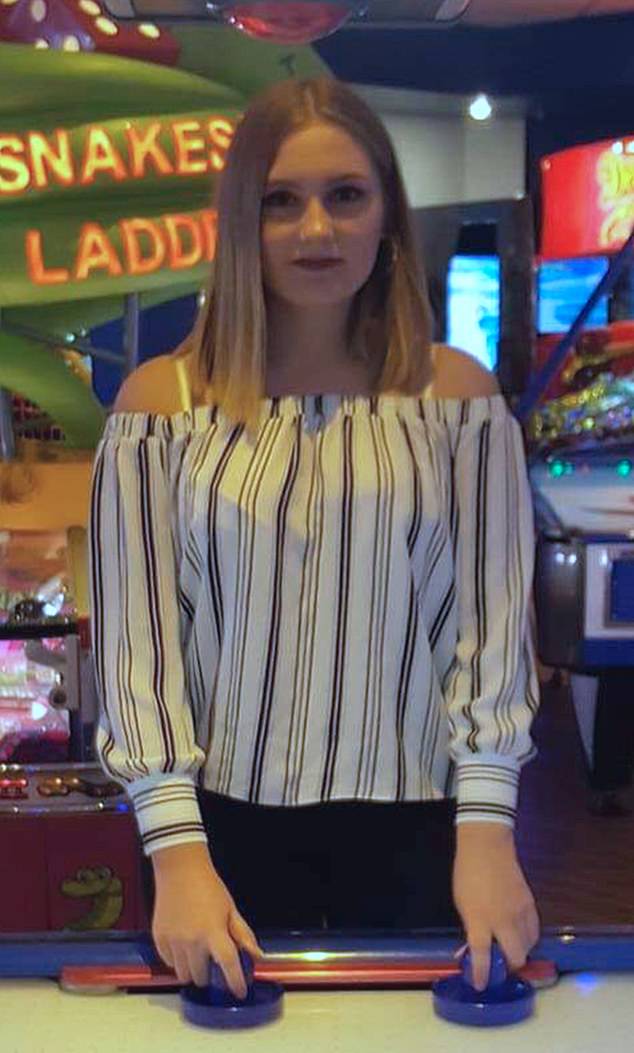 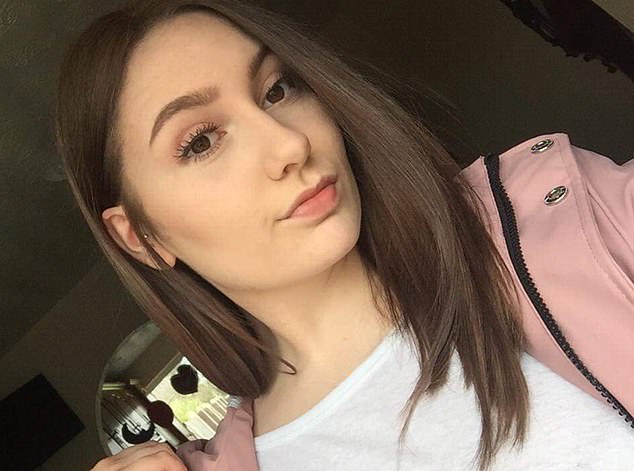 ‘I’m going to embrace my natural hair colour’: Miss O’Brien won’t be using hair dye after her scare, which lasted a week, again

For the next two days, Miss O’Brien couldn’t see so her mother had to look after her.

She said: ‘I stayed in bed, feeling miserable. I couldn’t believe this happened because I wanted to dye my hair.’

Thankfully, after a week, Miss O’Brien’s face returned back to normal.

She said: ‘I’ve not dyed my hair since and don’t think I ever will again. I’m going to embrace my natural hair colour.

‘Please always do a patch test. I was lucky that the swelling didn’t go down to my neck and block my airways. I learnt my lesson the hard way.’