A teenager who was expected to die after he suffered two strokes at just 12 is on track to compete at the 2024 Paralympic games.

Rafi Solaiman, of Worksop, Nottinghamshire, was forced to relearn how to walk, talk and even blink after two strokes caused a brain haemorrhage that left him with locked-in syndrome.

After undergoing brain surgery, doctors discovered Mr Solaiman had arteriovenous malformation, which occurs when an abnormal tangle of arteries and veins disrupts normal blood flow and oxygen circulation to the vital organ.

Although he still suffers slurred speech and memory loss, the now 18-year-old has defied the odds. He now uses a walker to get about after relying on a wheelchair for years.

He even ranks third in the world in race running and hopes to represent team GB, if the sport is added to the Paralympics in Paris, as expected. Race running involves para-athletes using a tricycle without pedals to lean on while they run. 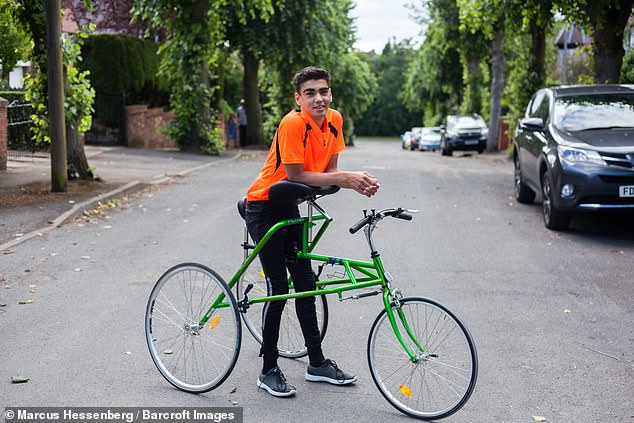 Rafi Solaiman was expected to die after he suffered two strokes at just 12. Pictured at home in Worksop, Nottinghamshire, on June 19, he is on track to compete at the 2024 Paralympic games in race running, which involves using a tricycle (pictured) without pedals to aid balance 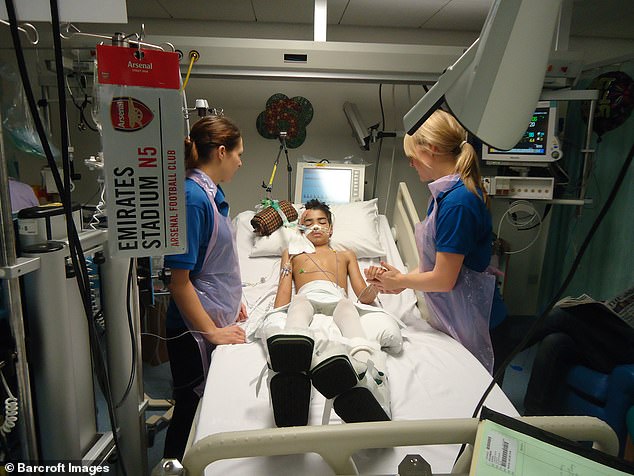 Mr Solaiman is pictured at Sheffield Children’s Hospital at 12 years old after undergoing surgery to relieve a tangle of blood vessels in his brain. Pictured holding his mother Jackie’s hand, the youngster suffered locked-in syndrome that left him unable to walk, talk or blink 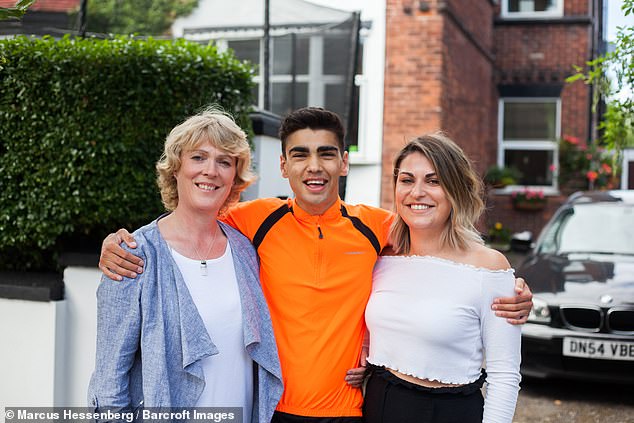 The now 18-year-old has defied the odds with him using a walker to get about after relying on a wheelchair for years. He is pictured with his mother and his sister Keira at home in June. He still suffers slurred speech and remembers nothing of the ordeal other than collapsing

He was also selected, along with three others, to represent team GB at the World Para Athletic European Championships in Berlin, where he won a silver medal.

Speaking of the sport, Mr Solaiman said: ‘It’s got a frame like a bike but it’s different because it has three wheels and it supports you so you don’t have to balance really when you run it.

‘When you run the wheels turn and it can get some good speed on the race.’

Since taking up the sport just one year ago, Mr Solaiman has set his sights on Paralympic glory.

‘Race running is hopefully going to be a Paralympic spot in 2024 in Paris so fingers crossed I’ll be competing for that,’ he said.

‘I can’t believe it’s not a Paralympics sport already because it is so great for anybody who needs support while running.’ 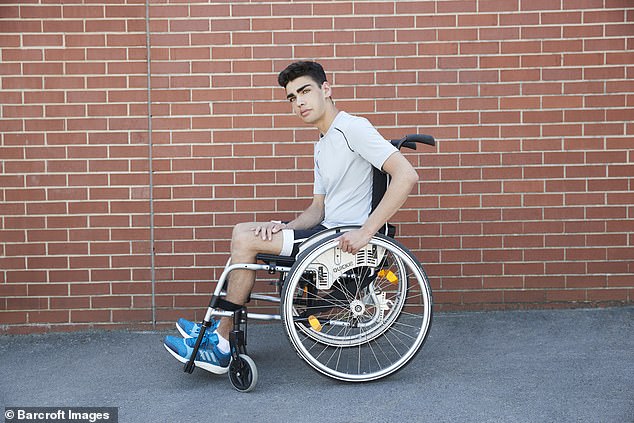 Mr Solaiman ranks third in the world in race running and hopes to represent team GB if the sport is added to the 2024 Paralympics games in Paris. He is pictured on a photo shoot after being spotted by the modelling agency Zebedee Management last year

WHAT ARE ARTERIOVENOUS MALFORMATIONS?

An arteriovenous malformation (AVM) is a specific term used to describe a tangle of blood vessels with abnormal connections between arteries and veins.

This means that blood from the arteries drains directly into the veins – without stopping to supply the normal tissues in that part of the body with essential substances like oxygen and nutrition.

Over time this can lead to the normal tissues becoming painful or fragile.

It also means that the AVM gets progressively larger over time as the amount of blood flowing through it increases, and it can cause problems due to its size.

Finally, it may also mean that the heart has to work harder to keep up with the extra blood flow.

Some doctors describe an AVM as ‘a ring road that bypasses the high street of a town’.

Traffic (or blood) will use the bypass rather than the high street which suffers as a result.

Speaking of his recovery, Mr Solaiman said: ‘I never thought I’d do this much really. I thought it’d take a lot longer than it has [to recover]. I’m pretty shocked to be honest.

‘I think I’m quite driven to do things and I think that’s partly what has made me improve me so much.’

Mr Solaiman, who lives with his mother Jackie and one of his three sisters Nina, even credits his stroke for boosting his self esteem and opening the door to so many opportunities.

‘I think it’s affected my confidence in a positive way actually because I was quite a shy little 12-year-old back then and I’m 18 now and I’m quite a confident young chap,’ he said.

His mother agrees, adding: ‘The Rafi that he has turned into has a lot more confidence. He was quite shy before and he is not so shy anymore and I think that’s to do with the stroke. I think that just changed that part of him.

‘I think he is more loving than he was before and he got his silliness back that’s for sure.’

Mr Solaiman, who recently graduated in media and tourism at West Nottinghamshire College, was even spotted by the modelling agency Zebedee Management last year.

‘When I have my photo taken I feel alive and when I go to a shoot I am looking forward to it, ‘ he said. ‘Modelling has helped my confidence in a lot of ways, for example I have met so many different people that I would never have approached.’

Mr Solaiman remembers nothing of his stroke other than collapsing on the sofa. But his mother recalls it started off as any other day. 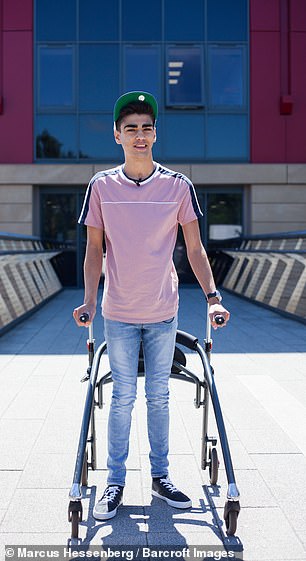 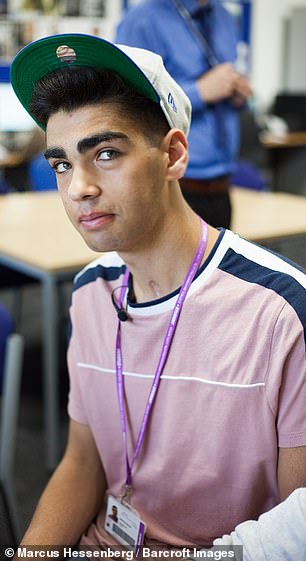 He is pictured left outside West Nottinghamshire College and right studying media and tourism. Now graduated, he is focusing on race running, having won two golds and a silver at the Cerebral Palsy International Sports and Recreation Association World games last summer

‘I had taken the dog for a walk, got back,’ she said. ‘It was a nice day. I was out in the garden, hanging out the washing. Rafi, who had been here with one of his sisters, he came outside and said that he had got a headache and he felt sick.’

Mr Solaiman dismissed his symptoms as a bug that was going round school but later complained of a banging headache and dizziness, before he collapsed.

‘It was like, one minute everything was fine, the next minute it was not,’ Jackie said. ‘By the time we got to the hospital, they were doing CPR on him.’

After being rushed to Sheffield Children’s Hospital, doctors told his parents he had suffered a major haemorrhage and would need a craniotomy – surgery to cut open his skull to access the brain – in order to understand the cause of his stroke.

After undergoing a six-hour operation to untangle the blood vessels in his brain, Mr Solaiman was barely responsive, with his family fearing the worst.

Just days later, he suffered a second stroke – something doctors only gave a one per cent chance of happening.

‘There was blood over the pillow because he had got a drain in his head, and it was all coming out of his drain,’ Jackie said. ‘They told me that there would be a one per cent chance that would happen but it did.

‘And they also told me if had another bleeding, he wouldn’t survive.’

Luckily Mr Solaiman did pull through but developed locked-in syndrome, which occurs when a sufferer is conscious but completely paralysed apart from their eyes.

‘I think after about a week following his stroke, we were told that he was locked-in; that the front of the brain was all damaged and so he would be able to hear and understand what was going on but wouldn’t be able to communicate.’

After being unable to take even one step forward for five-to-six months after the ordeal, Mr Solaiman gradually relearned how to walk. He can also talk again, despite his speech being slow and unclear.

Mr Solaiman was also forced to undergo an operation on his eyes in mid-2016 after one kept drifting to the side.

WHAT IS LOCKED-IN SYNDROME?

Locked-in syndrome is a rare brain disorder that causes complete paralysis of all voluntary muscles except the ones that control eye movements.

Sufferers are conscious but cannot speak or move. Their cognitive function is usually affected.

Locked-in syndrome is caused by damage to the brainstem that contains nerves that transmit information to other parts of the body.

Such damage usually occurs due to a lack of blood flow or bleeding following trauma.

Patients are unable to chew, swallow, speak or move, aside from their eyes, however, they can see and hear.

Most sufferers are bedridden and dependent on their carers.

Treatment focuses on relieving the underlying disorder, such as bleeding, if possible.

Patients may need tubes to help them breathe.

Small tubes are also inserted in their stomachs for eating and drinking.

Sufferers can be taught to communicate via their eyes.

Divorce court is normally quiet during the holiday season, but this year it’s booming

How long does it take for the AstraZeneca vaccine to work?