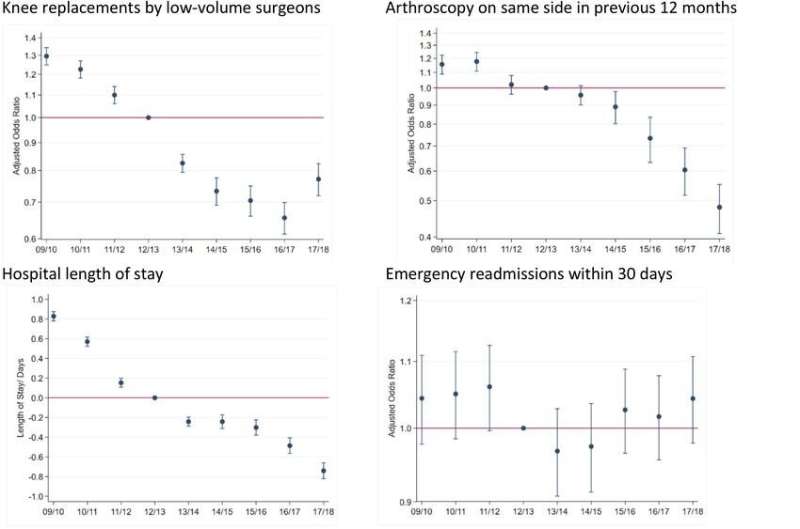 There have been significant improvements in care for patients undergoing hip and knee surgery through the NHS over the past 10 years, finds a new study led by UCL researchers.

The study, published in BMJ Open, set out to evaluate the impact of Getting it Right First Time (GIRFT), a national NHS improvement program which started in 2012. Initially established by a senior surgeon to focus on orthopedics, GIRFT is now one of the largest improvement programs in the NHS, operating across over 40 specialties. It operates at both local (NHS provider Trusts) and national levels, recognizing the importance of both system-level leadership and local leadership in Trusts for driving change.

The researchers, who were part of National Institute for Health and Care Research (NIHR) Applied Research Collaboration (ARC) North Thames, looked at data from more than 700,000 patients who underwent primary hip or knee replacement surgery at 126 NHS Trusts between April 2009 and March 2018 and interviewed more than 50 NHS staff.

The team employed a mixed methods approach to conduct a comprehensive analysis of the impacts of GIRFT in orthopedics from different perspectives and at both national and local levels. This included a statistical analysis of linked national datasets to measure the impact on both processes and outcomes of care, an economic analysis, and qualitative methods to understand staff perceptions of GIRFT’s impact.

The researchers studied eight different aspects of NHS orthopedic care that the GIRFT program team had identified as priorities for improvement, including reducing the use of uncemented hip implants in over 65s and knee arthroscopy, a type of keyhole surgery. The former has been found to lead to higher revision rates, whereas evidence shows the latter to be ineffective.

They found that there have been some substantial improvements over the past decade. When comparing 2009–2012 and 2015–2018, the number of uncemented hip implants in patients over age 65 was reduced by 29%, and knee arthroscopy prior to a knee replacement dropped by 58%.

The study also found that mean length of stay reduced by just over one day for both hip and knee patients between 2009–2012 and 2015–2018. Overall, post-operative quality of life and functional status also improved. However, many of the improvements seen began before the GIRFT program started.

A key component of the GIRFT orthopedic program was “deep dive” visits made to individual NHS Trusts by the national program team, led by the senior surgeon who set up the program. Before their visit, each Trust received a bespoke “datapack,” which brought together different data sources. The packs described the Trust’s performance across over 100 variables including direct patient care, use of evidence-based procedures, costs, ways of working, and procurement. At the visit, Trust staff, including surgeons and managers, discussed the datapack with the national program lead and his team to identify where improvements could be made.

The researchers also conducted 50 interviews with NHS staff, including orthopedic surgeons and managers, across six hospital sites. GIRFT had contributed to them making a range of improvements at three different levels: changes to individual patient care; changes to ways of working at Trust-level; and greater regional co-operation between Trusts. For example, changes included use of different joint implants during surgery and improved collaborative working within Trusts and across regions.

The team found that interaction within and between the three levels of impact was key. For example, improving efficiency by increasing the number of procedures conducted per day required orthopedic surgeons to negotiate with other specialties in the hospital to secure more theater time.

The deep dive visits were most successful when GIRFT aligned with existing Trust priorities. In some cases, the GIRFT datapacks provided Trusts who were already working to make improvements with the information they needed to support change. The visits were less effective where GIRFT measures were not a priority for Trusts because of more immediate demands, such as financial pressures.

Factors other than GIRFT also impacted practice. This included Trusts’ own pre-existing internal quality improvement programs, as well as other national initiatives happening at the time. For example, the Carter Review of NHS hospital efficiency impacted procurement; reductions in arthroscopies were driven by the Payment by Results Assurance Framework; and NHS Right Care (which is still ongoing) has supported local health systems to address performance variations. Consequently, it was not possible for the researchers to estimate the distinct contribution of the GIRFT program to improvements.

It is also worth noting that researchers did not have access to the data needed to examine some of the broader GIRFT target measures, such as reducing litigation and procurement costs, so the impact of these measures is unclear. What is clear is that processes and outcomes of orthopedic care have generally improved, and there are opportunities for Trusts to learn from these initiatives, and each other, and use their data more effectively to support real change.

Co-investigator, Professor Rosalind Raine (UCL Institute of Epidemiology & Health and Director of NIHR ARC North Thames), said, “This research clearly demonstrates that a range of activities offered by different initiatives are needed to achieve change and the difficulty in achieving improvements without broader system change.”

Rob Hurd, Chief Executive, North West London Integrated Care System and former Chief Executive, Royal National Orthopedic Hospital said, “The overall improvements in the quality of orthopedic care and the wider economic benefits during the period of this study are impressive. Professor Briggs and the GIRFT team are to be commended for inviting a level of academic rigor to be applied to the GIRFT improvement methodology that is not always applied elsewhere in the NHS.

“Achieving systemic and sustained improvement in health services and outcomes is complex and the variables are immense. Improvement can only be achieved through a set of conditions to which GIRFT principles of being clinically led, evidence-based measurement focus and transparency across pathways and over appropriate longevity, must play a significant part.”

A brain signature that predicts vulnerability to addiction