Six chips. This bloke in the US wants us to eat only six chips. All up. Like, not six chips at once squashed into your tiny gob. Only six chips altogether. Off the entire plate of crunchy, salty, crispy, greasy goodness.

It is absolutely the time of year when you want to eat and drink everything put in front of you. Smoosh ‘em all in.

The handfuls of beer nuts. The teensy Christmas chocolates wrapped in red and gold. The too excellent craft beer. Or any beer with those beer nuts. And Australia’s national dish – beer and hot chips. Side order of tomato sauce (get your barbecue sauce away from me now). 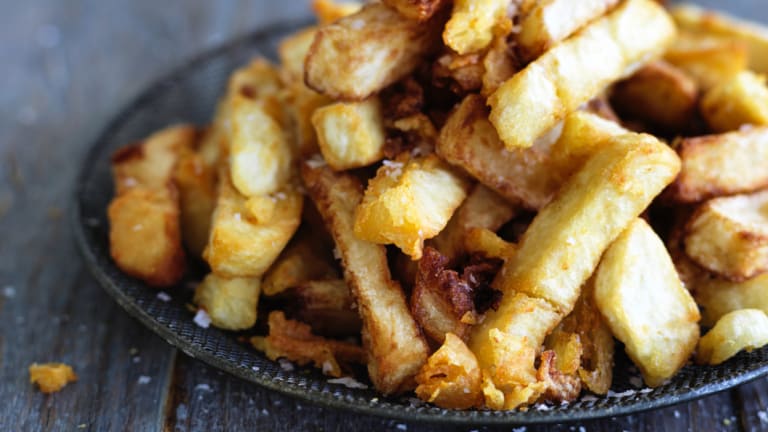 Harvard Chan School’s Eric Rimm want us to eat only six chips with a meal.Credit:William Meppem

But as we head into the season of overeating, it’s also the time of year where experts tell us what we should and shouldn’t eat and drink. Eric Rimm, professor of epidemiology and nutrition and director of Harvard Chan School’s program in cardiovascular epidemiology, was quoted in an interview with the New York Times last week in which he said: "I think it would be nice if your meal came with a side salad and six French fries."

Salad. Six chips. Who is this guy?

Poor Professor Rimm didn’t know what hit him. Guessing Harvard epidemiology professors are rarely mired in controversy but he was dropped into hot fat and fried alive to a crispy 190 degrees Celsius then dragged through the Internet. He ended up asking Vanity Fair if he was really a monster.  Fact check please. Plus, when I asked him if he was surprised by the response, it was all about us.

"Clearly I hit a vulnerable area," he said.

Surely his advice was a joke, done to provoke? Haha. No-one ever stops eating after six chips. But I checked with Professor Rimm. It was not a joke. To paraphrase him, potatoes are the devil’s work. I asked him if he really meant that the fat in which those potatoes were fried were the problem.

I beg him. Surely it is the fault of the oil but he is crisp with his advice: "[It’s the] potato unless the fries are cooked in trans fat."

Seriously not sure how worldly this guy is, I mean in the sitting-in-the-pub-and-watching-the-waves-roll-over-the-sand kind of worldly. I asked him why he’d given the six chips advice.

"I want restaurants to be more creative. Give diners a taste of what they like, but also give them the option of splitting that side with something so much better for you."

Like lettuce leaves. Or steamed brussels sprouts (not that there’s anything wrong with them). These were not his actual suggestions but I get the picture.

Surely there are worse things than French fries. Or as we call them here, chips. Rimm is not definitive on this – he says that of course there are worse foods but "French fries are easy to eat too much". He has experience here. He says: "I don’t order often, but of course when I do get them with a meal, once they are sitting in front of me I break down too.

"I regret it 15 minutes later when my body reminds me I ate too many!"

Good to know a world-leading nutrition professor has post-chip regret. Rimm tells me he is in London at a meeting and I suggest he visit Yotam Ottolenghi’s amazing restaurant because I’m trying to be healthful in my chat. He tells me he has the cookbook – and by this time I’m too nervous to ask if that response is really code for we have to give up going out to eat.

I decided to pit professor against professor. Surely an Australian professor with expertise would recognise that the six chip rule is nuts. Louise Baur, professor of child and adolescent health at the University of Sydney, understands my rage about the six chip advice but is also firm. Unfortunately Rimm is right.

"But I’m not sure it’s going to quite make it as a dietary guideline."

As Baur acknowledges, dietary guidelines can seem incredibly oppressive: five veg, two fruit, colourful vegetables (watch the sweet potatoes), watch your energy intake. Limit salt. Fat. Fun (ok, this is not actually on the list but it may as well be). Like Rimm, Baur says that because eating and drinking are communal activities, we must get pubs and restaurants to take a little more responsibility

"If we want people to be able to go out an socialise and do all those things, restaurants and pubs should provide healthful snack options."

To be honest, I long ago stopped ordering hot chips as part of my meal because I have always known they are the worst for a woman with a big bum, a family history of early death and modest self-control. But sometimes they appear on the plate of my long time companion Mr Skinny and they beckon.

The combination of Mr Skinny and the chips can sometimes be a little overwhelming. Root vegetable me right now, big boy.

Jenna Price is a Canberra Times columnist and an academic at the University of Technology Sydney.

Bones or No Bones? Psychiatrists on Why We Love Noodle the Pug