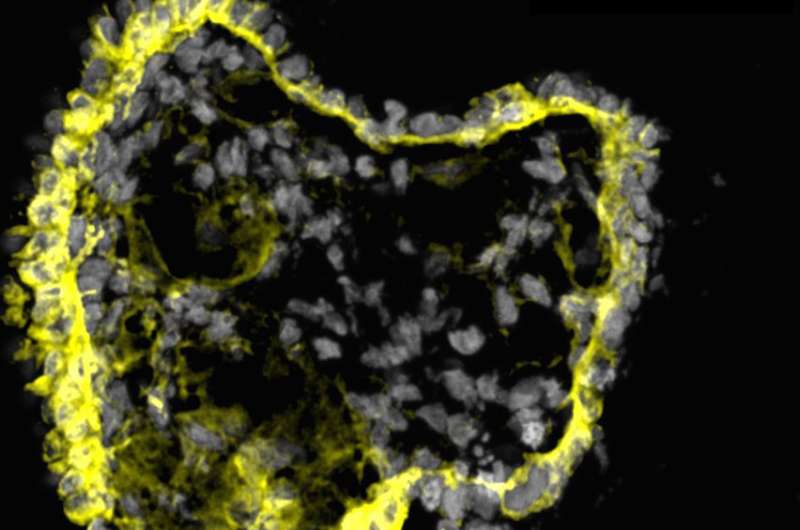 Affecting 8 million patients worldwide, the adult-onset form of polycystic kidney disease follows what is known as an “autosomal dominant” pattern of inheritance—meaning that the disease develops when a person inherits a bad copy of the gene PKD1 or PKD2, and the activity of the second good copy is also lost. Autosomal dominant polycystic kidney disease (ADPKD) causes large fluid-filled cysts in many regions of the kidney, leading to the loss of kidney function and other life-threatening complications affecting the liver, pancreas, and heart. Tolvaptan, the only FDA approved drug to treat ADPKD, slows but does not block disease progression, and only works in a subset of cysts composed of a particular kidney cell type.

To accelerate the quest for new treatments for ADPKD, first authors Tracy Tran, Cheng (Jack) Song, and their colleagues started with human pluripotent stem cells, which have the ability to either multiply to produce more stem cells or differentiate into many different types of specialized cells. They used these pluripotent stem cells to grow organoids consisting of one or two structures resembling the kidney’s filtering units, known as nephrons.

“These organoids are simple, reproducible, scalable, and cost-effective,” said Professor McMahon, the lead author on the study, Chair of the Department of Stem Cell Biology and Regenerative Medicine, and Director of the Eli and Edythe Broad Center for Regenerative Medicine and Stem Cell Research at USC. “Most importantly, the organoids can consistently recapitulate key aspects of normal human kidney development, as well as cyst formation in ADPKD.”

The scientists demonstrated that the organoids contained many of the cellular precursors and genetic signatures required to build the kidney during embryonic development. When implanted into a mouse, the organoids’ nephron-like structures started to develop vasculature and even attained a limited capacity to filter wastes—one of the most important functions of the kidney.

To make the organoids useful for studying ADPKD, the scientists used CRISPR/Cas9 gene editing to inactivate PKD1 or PKD2. As anticipated, the gene-edited organoids began to form cysts, which eventually detached and grew to centimeters in diameter.

The scientists then performed the first screen using gene-edited human organoids to identify potential therapeutic drugs for ADPKD, focusing on a collection of enzyme inhibitors to give broad insight into the cellular mechanisms controlling cyst formation.

“Our organoids proved to be very useful for identifying therapeutic drug candidates that merit further study for the treatment of ADPKD,” said Song, who is a Postdoctoral Amgen Scholar in the McMahon Lab.

After testing a collection of 247 enzyme inhibitor compounds on the organoids, the scientists found nine that inhibited the growth of the cysts, without stunting the overall growth of the organoids. One compound, quinazoline, was particularly effective.

“In the future, organoids will become an increasingly powerful tool for modeling and understanding human disease, identifying potential treatments, and eventually, providing transplants to replace organ function for patients,” said Tran, who performed the research as a Ph.D. student in the McMahon Lab, and is currently a postdoctoral trainee at UCLA.