How to bring back your sense of smell: Scientists discover placing electrodes in the nose to zap the brain may ‘return the sensation’

Zapping the brain by placing electrodes inside the nostrils could bring back your lost sense of smell, scientists believe.

Being able to regain smell would be a breakthrough for millions, as figures estimate up to five per cent of people are unable to process scents.

Doctors at Massachusetts Eye and Ear tested the method on five patients who could already smell. It is the first time the sense has been stimulated this way.

The scientists believe the results open the door for a cochlear implant for the nose. 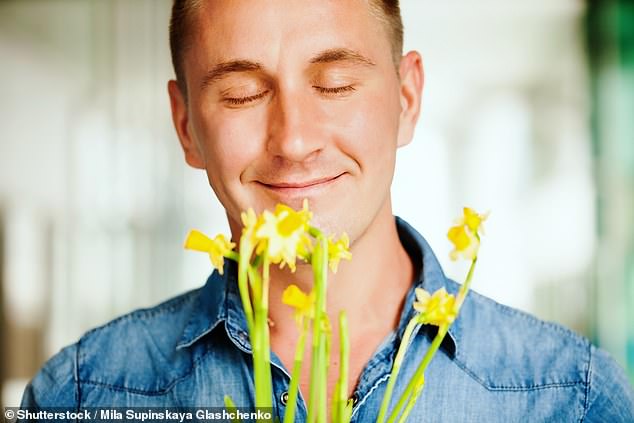 Scientists may be able to bring back the sense of smell for people who have lost theirs using electrodes in the nose to stimulate the olfactory bulb in the brain, where smell is processed

The scientists at Massachusetts Eye and Ear – a Harvard teaching hospital – focused on the olfactory bulb, where smells are processed in the brain.

By placing electrodes in the nose, the nerves in the olfactory bulb were stimulated, and information was sent to the deeper regions of the brain.

Some cases of loss of smell can be treated by caring for an underlying cause, such as blocked sinuses or swelling, where the nasal passage is obstructed and smells can’t reach the brain.

In more complicated cases, the sensory nose may be damaged due to head injury, a virus or ageing, which can lead to anosmia – complete loss of smell.

There are currently no proven therapies for this, but the new study proves there are options on the horizon.

‘Our work shows that smell restoration technology is an idea worth studying further,’ said Dr Eric Holbrook, chief of rhinology at the hospital.

HOW DOES ZAPPING THE BRAIN REGAIN THE SENSE OF SMELL?

The scientists at Massachusetts Eye and Ear – a Harvard teaching hospital – focused on the olfactory bulb, where smells are processed in the brain.

By placing electrodes in the nose, the nerves in the olfactory bulb were stimulated, and information was sent to the deeper regions of the brain.

The scientists believe the results open the door for a cochlear implant for the nose. Cochlear implants also use electrodes to stimulate the hearing nerve.

‘There’s currently so little that we can do for these patients, and we hope to eventually be able to reestablish smell in people who don’t have a sense of smell.

‘Now we know that electrical impulses to the olfactory bulb can provide a sense of smell, and that’s encouraging.’

In the study, five patients, who were aged between 43 and 72, who still had the ability to smell had electrodes placed in their sinus cavities.

The researchers said they had to perform the experiment on people with an intact sense of smell, ‘otherwise a negative result wouldn’t reliably explain if electrically stimulating the olfactory bulbs and bypassing the nasal neurons was a feasible route of future therapy’.

The electrical current was slowly increased, as the patients were asked to sniff a stimulus, rating the intensity of the smell on a scale of one to 10.

Three patients described sensations of smell, including reports of onions, antiseptic, sour and fruity aromas, as a result of the stimulation.

The findings were presented in the journal the International Forum of Allergy and Rhinology.

The method of electrical stimulation has proven successful in other sensory systems, particularly hearing.

Cochlear implants restore hearing in people with profound hearing loss, and is the  most successful device in the world to have come from neuroscience, according to the researchers.

It has been on the market for more than three decades, used in over 324,000 people worldwide as of December 2012, data shows.

‘The development of cochlear implants, for example, didn’t really accelerate until someone placed an electrode in the cochlea of a patient and found that the patient heard a frequency of some type.’

Figures estimate up to five per cent of people – around three million people in the UK and 16 million in the US – suffer from loss of sense of smell.

CAN A GOOD SENSE OF SMELL MAKE YOU BETTER AT NAVIGATING?

When asking for directions, you should look for someone with a good sense of smell.

That is the advice of scientists who found that people with a naturally good sense of direction also have a heightened ability to detect faint odours.

Brain scans published last month in the journal Nature Communications revealed two specific regions of the brain that are heavily involved in the control of both skills.

Dr Veronique Bohbot from McGill University in Canada led a team of scientists to determine if there was a link between the two very different traits.

A group of 57 volunteers participated in an experiment which assessed the proficiency of their nose as well as their sense of direction.

Divorce court is normally quiet during the holiday season, but this year it’s booming