Sadiq Khan was accused of being a ‘Scrooge’ today because of his controversial plans to ban mince pie and cake adverts on public transport.

The Mayor of London was slammed over claims the move could prevent cancer charity Macmillan from advertising its coffee and cake events, which raise millions of pounds.

When Mr Khan explained the charity may have to change its adverts, a Tory politician branded him a Grinch and compared him to Scrooge, the Christmas-hating Dickens character.

Cakes and mince pies would no longer be allowed to be advertised under the new plans because of their sugar content. 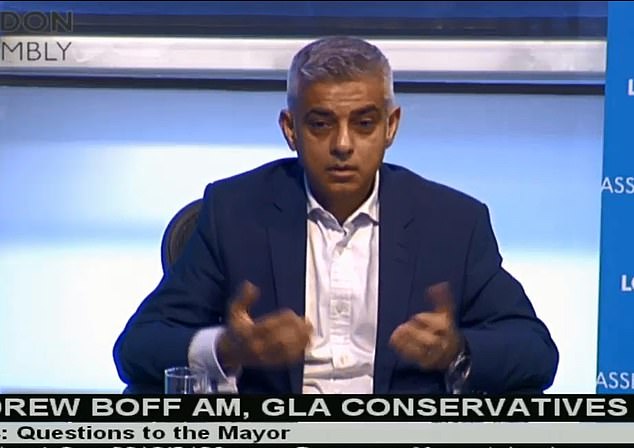 Sadiq Khan, Mayor of London, was left ‘speechless’ by Mr Boff’s Scrooge jibe and stared blankly at him for a few seconds before shaking his head and saying ‘It was never my intention to be Ebenezer Scrooge, does that help?’

The ‘world’s biggest coffee mornings’ are a regular fundraising drive for Macmillan, which offers support for people with cancer and their families.

So far the charity has raised more than £25million from the events but there are fears it would be unable to show cake in its adverts under new rules.

Mr Boff said: ‘Londoners will be horrified to learn that the Mayor has such a nasty Christmas present in store for Macmillan Cancer Support.

‘Macmillan rely heavily on donations in order to carry out their invaluable work, yet Sadiq Khan has chosen to ban them from advertising one of their key fundraising events. This is a callous, mean-spirited and insensitive move.

‘This whole ban is entirely flawed and should be scrapped – but failing this the Mayor needs to put an exemption in place for our brilliant charities such as Macmillan.’

Mr Khan said in the Mayor’s Questions this morning: ‘We know from our conversations with those who advertise on TFL that they’re very happy to tweak their adverts to make sure they don’t fall foul.’

And he added: ‘I’d be astonished if Macmillan Coffee Mornings weren’t advertised on the TFL estate in future as they have been in the past.’ 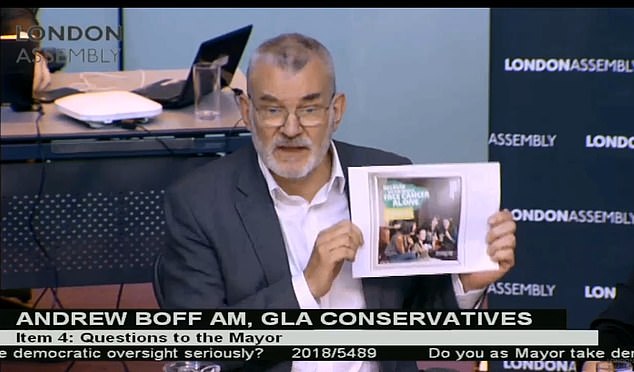 Andrew Boff, a member of the Greater London Authority Conservatives, said he was worried Macmillan Cancer Support would not be able to advertise its coffee and cake mornings which have raised millions of pounds for the charity 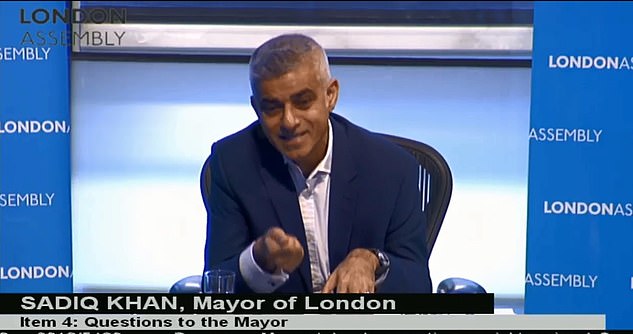 The ban on junk food adverts is expected to come into force at the end of February and will cost £13million a year.

A ban on junk food advertising across London’s public transport system will be introduced on February 25 2019.

The capital’s mayor Sadiq Khan confirmed the ‘tough action’ initiative, which is part of the London Food Strategy to reduce child obesity in the city by 2028.

Promoting products such as sugary drinks, chocolate and burgers will be prohibited across the entire transport network, including the Tube, bus stops and the London Overground.

However, fast-food chains will still be allowed to promote their healthier products, such as salads, as long as they are low in fat, salt and sugar.

‘Evidence shows we need to take action on a number of fronts, and it is clear that the Mayor’s action is an important step in the right direction.’

Mr Boff also said, because of mince pies’ sugar content, adverts for them would be banned next Christmas.

This made Mr Khan a ‘Grinch’, he claimed.

And he asked the mayor if he had intended to become Ebenezer Scrooge, the selfish Christmas-hating character in Charles Dickens’s ‘A Christmas Carol’.

Mr Khan, clearly flabbergasted, said he was left ‘speechless’ by the outlandish question.

He then said: ‘It was never my intention to be Ebenezer Scrooge. Does that help?

Mr Khan, clearly losing patience with Mr Boff’s questions, had earlier explained he listened to health experts rather than advertising executives when deciding on the ban.

He said: ‘I think we have a health crisis when it comes to obesity and overweightness in our children.

‘These children have problems when they’re young, being obese and overweight, but these problems will carry forward to when they become adults.

‘From a whole host of issues from heart disease, from increased chances of having cancer, to being a burden on the National Health Service and also quality of life and enjoyment.

‘They may criticise me, he may even try to mock me, I’m not going to [back down] from my commitment to make our city as healthy as we possible can. Merry Christmas.’

A Macmillan Cancer Support spokesperson said: ‘We are aware of the forthcoming changes to rules around advertising on London transport.

‘We are working to fully understand the implications for World’s Biggest Coffee Morning, and make sure that we are still able to raise awareness and encourage people to take part in this annual fundraising event.’

A spokesperson for the Mayor of London added: ‘Adverts for charity fundraising events, such as cake sales or coffee mornings, would not face an automatic ban from the Transport for London network under the Mayor’s policy.

‘This policy is not about telling Londoners what they can and can’t eat or drink.

‘Its purpose is to remove advertising which promotes food and drinks which are high in fat, salt and sugar.

‘Adverts which feature incidental images of these products may be permitted under the policy – we would always seek to engage with the advertiser to help them fully understand the policy and its aims, particularly charities seeking to promote their events and activities on the TfL network.

‘Child obesity is a ticking timebomb in London and the Mayor makes no apologies for taking bold steps to tackle it head-on.’

A reference tissue atlas for the human kidney