A pioneering study, released as a preprint on the bioRxiv* server, reports on the interaction of a tailored titanium oxide nanoparticle (NP) with the full-length severe acute respiratory syndrome coronavirus 2 (SARS-CoV-2) non-structural protein 1 (nsp1). This should be of value in developing new therapeutic tools against coronaviruses that act by targeting their proteins. It could also help map the structure of activated proteins. 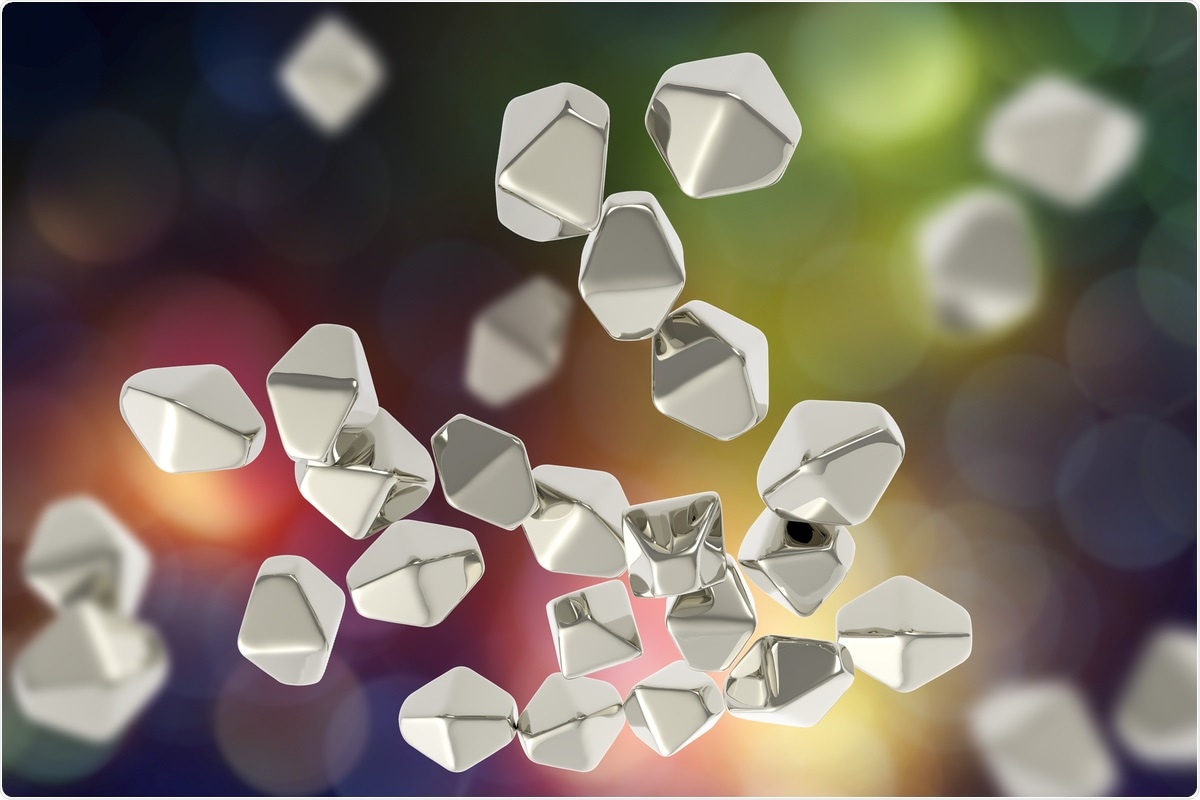 The SARS-CoV-2 is a betacoronavirus with a single-stranded ribonucleic acid (RNA) genome of 30 kB length. This generates two large polyproteins that are cleaved to yield non-structural proteins, named nsp1 to nsp16, via the proteases encoded within it.

The structural proteins are essential for viral replication, as part of the replication-transcription complex, as well as bringing about the intracellular environment necessary for efficient replication. Among them, nsp1 is implicated in viral pathogenesis.

Nsp1 inhibits host protein synthesis and causes cellular messenger RNAs to break down, thus promoting viral immune escape. Its role in viral replication is unquestionable, though the mechanism is unclear.

These characteristics have made it a promising target for anti-SARS-CoV-2 therapies. Structurally it is a small protein with one α-helix, β-sheets, turns and one short and one long disordered domain.

Metal oxide nanoparticles (NPs) are composed of minerals commonly found in the sand, leached into ground water, springs and streams. They have chemically reactive surfaces, catalyzing redox reactions, particularly when exposed to sunlight.

They also react with biomolecules, and in particular proteins. For this reason, NPs are rarely seen as such in vivo. Rather, larger NPs are assembled with protein molecules on their surfaces, while smaller NPs bind to protein fragments specifically, depending on their size and chemical composition.

As a result of these interactions, some NPs hydrolyze the proteins while others coagulate them. At the molecular level, NPs can cause micro-colloid crystals to form – called poly oxo-metalate species (POMs). These NPs are actually distinct molecular species, but are NPs as well, just larger than 1 nm in size.

The scientists used nuclear magnetic resonance (NMR) spectroscopy to help them modify the chemical composition and surface structure of titanium oxide NPs to understand their binding affinity for the nsp1 protein. As this study proceeds, it could help develop a tool to selectively modify such viral enzymes.

How was the study done?

The researchers selected two types of TiO2 NP. When treated with nsp1, in an equimolar ratio, there was no change in the spectrum of the first NP, while with the second, the signal was disturbed with respect to the amide residues of the second half of the rigid α-helix fragment of the protein.

When the ratio of the first NP to the sample was increased to 10:1, there was still no change. The doubling of the second NP:nsp1 ratio also failed to bring about significant change in these amides, showing the binding of this NP to specific sites on the nsp1 α-helix.

The difference between the NPs is probably because the first one has its surface strongly bound to lactate molecules, which blocked its reactivity. Lactate ligands form strong bonds through the carboxylate oxygen via chelation of one Ti atom. The Ti-O distance is about 2 Å. Simultaneously, the lactate forms a shorter and stronger Ti-O bond via its alkoxide oxygen atom, the bond distance being 1.86 Å.

This was not observed with the second NP, which formed surface complexes of inner sphere carboxylate with the nsp1, involving the side chain aspartate and glutamic acid carboxylate groups.

In such bonds, the complex structure always involves two carboxylate group oxygen atoms bound to two Ti atoms adjacent to them, in a double oxygen bridge denoted by Ti(μ -O)2Ti. This binding is both strong and uniform in the T-O distances, approximately 2 Å each.

This common inner sphere bonding is, therefore, possible only with the second NP. For this reason, the first NP, which has the TiO2 molecule ending in the lactate moiety, does not bind to the nsp1.

With the second, increasing addition did not cause further perturbations of the chemical structure, probably due to the existence of as yet unknown, interactions between other atoms.

Using modeling tools, the researchers matched the geometry of the TiO2 and nsp1 molecules. Despite the shift in the backbone amide groups observed here, they say, “It is very unlikely that of the amides would directly interact with the nanoparticle without major structural changes of nsp1. Most likely it is the sidechains that interacts with the titanium-oxide nanoparticle.”

As a result, they concluded that the D48 and perhaps some more hydrogen bonds to the side chains of the E41 (carboxylate), Q44 (amide carbonyl) and H45 (Nδ1) caused the TiO2 mediated the specific attraction of the TiO2 NP that led to the formation of the inner sphere complex between the single carboxylate fragment. This matching also agrees with the NMR changes.

Since the curved anatase structure was simulated by the spherically shaped anatase monolayer reported recently in the H6[Ti42(μ3-O)60(OiPr)42(OH)12)] structure, the latter seems to resemble the small anatase NP structure. The α-helix-NP interactions are likely to be increased in the case of the second NP because of the larger size of this particle, which gives it a flatter surface.

What are the implications?

The scientists admit that the reason for site-specific binding to be limited to the second half of the α-helix is unknown, though it contains 16 carboxylate-containing potential interaction points. They suggest this may be due to their having a suitable distance with other potential hydrogen bond-forming molecules, allowing binding to the surface of the TiO2 NP.

Such studies involve structural biology and inorganic chemistry. In the present case, the scientists used NMR spectroscopy to define the nature of the changes in the nsp1 side chains on interaction with the TiO2 NP. Docking studies will be required.

By showing that the geometry of these two types of molecules can be specifically matched, they open the door to the chemical modification of NPs, allowing them to be designed as inhibitors of protein recognition at specific sites. This could lead to their use in a variety of applications, from the rapid detection of viral antigens to the creation of new antiviral drugs.

Moreover, the findings of this study suggest a putative mechanism of antiviral activity for metal oxides, as has been reported by several investigators. And finally, NPs may be used to trace the changing structures of active proteins, tuning them in order to detect specific patterns as required.

bioRxiv publishes preliminary scientific reports that are not peer-reviewed and, therefore, should not be regarded as conclusive, guide clinical practice/health-related behavior, or treated as established information.

Doctor/Spy: How MDs Get Involved in Espionage

Tim McGraw Changed His Lifestyle After Faith Hill Told Him 'Partying or Family, Take Your Pick'