More British women than ever are dying from alcohol-related diseases, figures revealed today.

Eight women in every 100,000 across the UK die every year because of conditions caused by boozing.

This figure is the highest it has been since records began in 2001 but still lower than the average of 12.2 deaths, and fewer than half the 16.8 deaths among men.

Hard-drinking baby boomers are also dying young because of their habit. Death rates are highest among women in their late 50s and men in their early 60s. 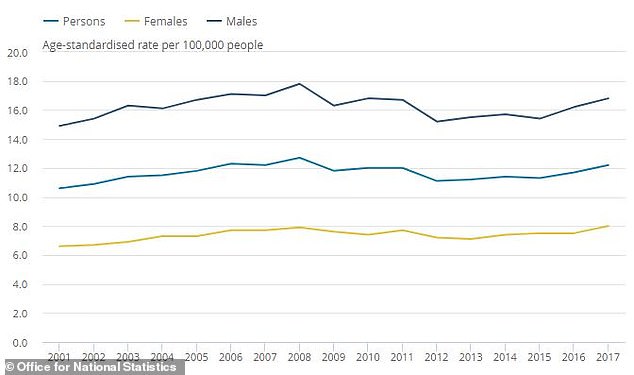 Figures released today by the Office for National Statistics showed women (illustrated by the yellow line) are now dying in greater numbers than ever because of alcohol, although the figure is still half that of men (dark blue line)

Figures released today by the Office for National Statistics laid bare the scale of drinking-related deaths in England, Scotland, Wales and Northern Ireland.

And the death rates are rising in every country except Scotland, although people living there are still the most likely to die because of drink.

A total of 7,697 people died from alcohol-specific causes in the UK last year, of which 2,564 were women.

The number of women dying is comparable to 2008, when levels were at their highest ever among all groups – in that year 7.9 women died per 100,000.

Women in the north-east of England are most likely to die prematurely because of their boozing, while the figure is lowest in London – and the same is true for men.

Across both sexes, people aged between 50 and 69 have the highest proportion of deaths from alcohol-related causes, which include liver disease, brain damage, pancreatitis and poisoning.

In 2001, people aged 45 and 49 were more likely to die from alcohol-related problems than those aged 65 to 69, but this has now been reversed.

And the same is true for 40 to 44 year olds and people in their 70s – the figures  show people currently aged between 55 and 79 have caused themselves more harm with drinking than those who were the same age at the start of the century.

‘We know alcohol is an issue for over-50s and we need to do a lot more to reach this group in a way that works for them,’ said Karen Tyrell of Addaction, a mental health, drug and alcohol charity. 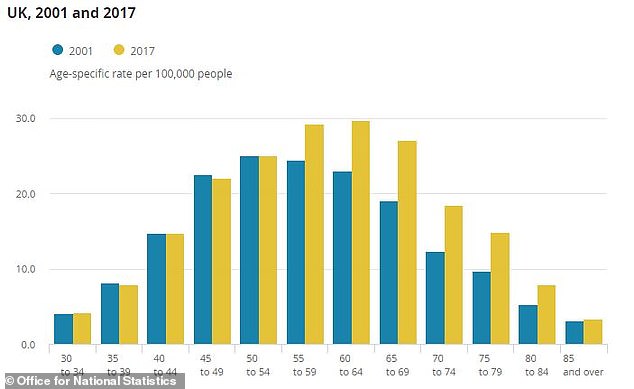 Alcohol-related death rates have spiked in people aged between 55 and 79 since 2001 – the biggest increase has been among those between 75 and 79 years old, who are 53 per cent more likely to die because of booze than they were in 2001 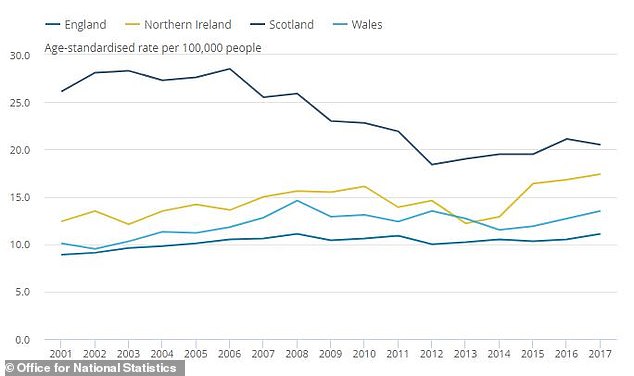 Scotland (darkest blue) is the only country in which the number of people dying because of drink is falling, but it continues to have the highest total death rate, followed by Northern Ireland (yellow), Wales (light blue) and England (dark blue)

In England, women in the North East and North West are most likely to die from alcohol-related causes, where as those in London and the South East are least likely – the biggest regional jump since 2001 has been in Yorkshire and the Humber

‘The people we work with frequently talk about alcohol as a way to deal with loneliness, isolation, and the sense of loss that sometimes comes with retirement and move into a new phase of life.’

Between the nations of the UK, Scotland is the worst affected by alcohol and has been for the 16 years since the data began.

There, 20.5 people per 100,000 die because of alcohol-related illnesses. This is almost double the 11.1 people in England, which has the fewest deaths.

HOW DOES ALCOHOL KILL PEOPLE?

Alcohol, usually drunk because it releases feel-good chemicals in the brain called endorphins, can damage people’s bodies in many ways.

Alcoholic drinks are high in calories and cause excess fat to circulate through our bodies, and alcohol itself is broken down into a chemical called acetaldehyde, which is toxic and damages DNA.

Alcohol-related illnesses in the Office for National Statistics’ death toll include:

Bladder cancer symptoms: The colour of your urine could pinpoint the deadly disease