Researchers at the University of Sydney found that the same amino acids in protein shakes that encourage muscle-bulking are bad for overall health.

The health and wellness industry is booming in the US, but research often takes some time to catch up to – and often disprove the benefits of the latest diet and fitness fads.

Protein is the latest to fall, as scientists discover that consuming too much of the same kind of protein contributes to poorer overall health. 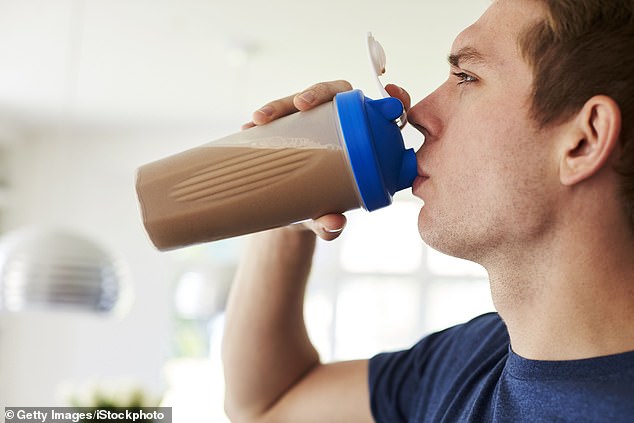 The protein supplement industry raked in $14 billion worldwide last year, as gyms, juice bars and yoga studios cropped up on every city corner.

Fit is in, and Americans want more muscle fast.

Protein shakes are marketed as the magic ingredient.

The mantra of many recent fad diets has been ‘high-protein, low-carbohydrates.’

Carbs are the culprits for a number of body changes we know are bad for overall health. They can contribute to the body’s storage of fat and unhealthy changes to insulin.

Protein, on the other hand, is an important basic unit that builds bones, muscles blood and more.

They are both macronutrients, but separating them into ‘good’ and ‘bad’ is an over-simplification to say the least.

BCAAs don’t just go straight to muscles. Consuming a diet high in them means they lurk around tin the blood.

There, they compete with another type of amino acid, tryptophan.

Both are trying to get to the brain (as well as to your ‘braun). But once they are there, they have different effects.  Namely, tryptophan is key to the production of serotonin.

When BCAAs are high in the blood they may steal tryptophan’s place in the brain, disrupting serotonin there. That can in turn mess with your mood.

Serotonin isn’t just a happiness serum; we need it to curb our appetites too.

‘Tryptophan is the sole precursor for the hormone serotonin, which is often called the ‘happiness chemical’ for its mood-enhancing effects and its role in promoting sleep. But serotonin does more than this, and therein lay the problem,’ said Dr Stephen Simpson, study co-author.

When the researchers overfed lab mice on BCAAs, the animals gorged themselves and became obese.

Those obese mice had shorter lifespans as well, unsurprisingly.

While BCAAS are effective at building muscle and important parts of nutrition, the scientists insist we are better off getting them – alongside other proteins, like tryptophan – through diverse diets that contain chicken, fish, eggs, beans, lentils, nuts and soy.

How to get rid of visceral fat: The best and worst foods to eat – what are they?