Playing Christmas music too early could be BAD for your health: Experts say jolly jingles trigger stress over pressure to buy, spend and be happy

It may only be November but some stores are already playing Christmas music – and that is not good news for you.

From now until December 26, you will likely hear classic tunes from Jingle Bells to All I Want for Christmas Is You blaring in every store you shop in.

Any repetitive playlist can be irritating, but according to music psychologists there is something about holiday jingles that make them particularly overwhelming.

Speaking with DailyMail.com, experts explain that beyond the general annoyance of Christmas-themed melodies, there is something particularly triggering about holiday music because it reminds us of the financial and emotional stress of a season that is meant to be joyful but can be loaded with pressure.

What’s more, that may drive you to spend more money when you shop – leading to heightened stress after. 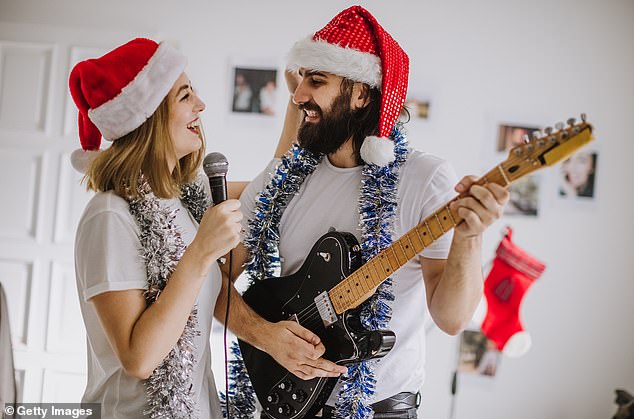 Dr Peter Christenson, a professor of rhetoric and media studies at Lewis & Clark College in Portland, Oregon, explained that there is a general pressure that comes with Christmas.

‘What is toxic about the holidays is that at this one time of year, you’re expected to read people’s minds and give them the perfect gift,’ he told DailyMail.com. ‘And the music plays into that.’

In a way – the holiday music about jingling bells, snow, sleighs and Santa reminds people of their Christmas obligations.

According to a 2006 survey from the American Psychological Association, 61 percent of people say they experience stress during the Christmas season,

Additionally, more than one-third of respondents reported that their stress levels increase around the holidays.

These can all raise the risk of – or worsen – diseases such as diabetes, high blood pressure, asthma and arthritis.

Additionally, the increase of cortisol, known as the stress hormone, can increase the amount of fat tissue your body and cause you to gain weight.

Of course, playing Christmas carols to remind you of your need to shop is ideal for retailers, who want to make sales.

A 2003 study from Washington State University found that when shoppers were exposed to Christmas music with a Christmas scent – such as pine or cinnamon – they felt more positively about the store environment, which made them spend more money.

‘If the music didn’t perform a function, they wouldn’t play it,’ Dr Christenson, who was not involved with the research, said.

‘It creates this ambiance of this warm, fuzzy Christmas feeling. I might buy a little more or stay in a store longer that is beautifully decorated or have a pianist playing Christmas carols in the lobby like Nordstrom’s.’

Lead author of the study Dr Eric Spangenberg, dean of the College of Business at Washington State University in Pullman, added that certain types of Christmas music might even work better on customers.

‘Faster-paced pieces move people through the store quicker than retailers would like.

But the incessant loop of Silent Night and Winter Wonderland can be draining on the employees.

‘It’s the same thing that occurs at a supermarket when pop songs are played on a loop,’ Dr Christenson said.

‘I bet the cashiers are being driven crazy by it trying to tune it out and complain to each other.’

Studies have shown that the front of the brain, the prefrontal cortex, acts as a filtering mechanism to keep irrelevant thoughts from interfering with a task you are performing.

Therefore, if you’re an employee at a store playing continuous Christmas music, your brain has to work even harder so you can focus,

Dr Christenson said that we also suffer from something called ‘mere exposure effect’ during the holidays.

The first time we hear a song we like it gradually more and more. That is, until we don’t because we’ve heard it too often.

This is then followed by annoyance and boredom at hearing the same sound over and over again.

‘It’s more of a diminution where [the Christmas music] wears off to the point there it means nothing like hearing the word “milk” a hundred times,’ he said.

This is then followed by annoyance and boredom at hearing the same sound over and over again.

Some retailers, such as Target, have been promising to put a stop to the merchandising phenomenon known as the ‘Christmas creep’ but vowing to not play any holiday music until the day after Thanksgiving.

A Tampa Bay Times analysis recently looked at big-budget department stores and how soon they crank up the Christmas carols.

Best Buy was declared to be the worst of the offenders, playing Christmas music in its stores a full two months before the holiday.

Meanwhile, on November, both Sears and Kmart start playing a mix of holiday music and popular music on November 1, gradually increasing the amount of the former throughout the season.

‘But you can say the same thing about people’s Christmas lights on their homes [that you can about Christmas music] – there’s an appropriate place to put them up and take them down.

‘But if they think it makes the house look nice, people leave them up. There’s people here in Portland who will leave them up all year.’

What is Long-Read Sequencing?