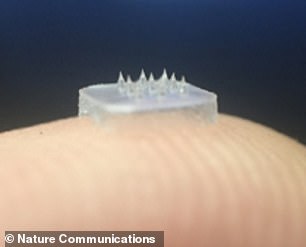 An eye patch covered in tiny needles may sound like a particularly cruel form of torture, but scientists believe their invention could change how eye diseases are treated.

The patch, which is covered in dissolvable microneedles, gently penetrates the front of the eye to gradually release medication that could relieve everything from glaucoma to macular degeneration.

And while it may look like a miniature bed of nails, the scientists insist the patch is painless and as easy to use as putting in contact lenses.

Writing in the journal Nature Communication, scientists from Nanyang Technological University, Singapore, said: ‘The flexible patch can be readily applied by gentle and brief thumb pressing on the ocular surface.

‘Which is as easy as wearing a disposable contact lens without causing discomfort or requiring high skills.’

Once the patch is in place, fluid from the eye begins to seep into the space between the microneedles. This erodes away the material that holds them in place, resulting in the needles becoming embedded in the cornea.

The outer layer that surrounds these microneedles then starts to dissolve and in doing so delivers an initial strong dose of medicine.

Over the next few days, as the microneedles continue to dissolve, more medication is released.

To prove its effectiveness, the scientists, led by Dr Aung Than, tested the eyepatch on mice who were suffering from corneal neovascularization (CNV).

CNV occurs when new blood vessels grow into the cornea as a result of oxygen deprivation and cause loss of vision in up to 20 per cent of sufferers. It affects around 280,000 people in the UK and 1.4m in the US every year.

When the rodents were given just 1microgram of an anti-blood vessel drug via the patch, 90 per cent of the affected area healed.

The researchers predict a single 20mcg dose would be sufficient to treat CNV in humans.

When tested for safety in the animals, the scientists found no signs the mice were in pain, which they believe is due to the patch not puncturing the entire cornea.

Any insertion marks cleared after a day, which suggests these were naturally healed by the animal’s body, the scientists claimed. They also observed no bleeding or inflammation in the rodents’ eyes.

Side effects are not expected in humans due to the patch gradually releasing drugs, which eliminates the need for a large, one-off dose of medicine.

Although the patch has only been tested in CNV to date, the researchers believe it could also treat other eye diseases.

Once the patch is in place, fluid from the eye seeps into the space between the microneedles. This erodes away the material that holds them in place, resulting in the needles being embedded in the cornea. This leads to an initial strong dose of medicine being delivered

Eye diseases such as glaucoma, diabetic retinopathy and macular degeneration are on the rise worldwide due to the ageing population, growing rate of diabetes and high use of contact lenses.

Delivering drugs to the eye has traditionally been difficult due to its stubborn blood-retina barrier.

The researchers claim the patch will appeal to patients due to it being easy to use, ‘minimally invasive’ and suitable for at-home use.

‘We believe this approach could be paradigm-shifting for long-term home-based treatment and management of various eye diseases,’ they wrote.

Taking oral tablets for eye conditions usually requires a large dose, which then raises the risk of side effects.

Administering medication via eye drops is often ineffective due to less than five per cent of the treatment typically being absorbed.

And injections directly into the eye tend to be painful, as well as running the risk of infections, bleeding and even permanent damage.

The above three administration methods also give just a burst of a drug rather than slowly releasing it, which is typically what is required for chronic conditions like glaucoma, the scientists claimed.

How to lose bell fat: Three of the best diet and eating plans to help burn belly fat

Beyond Babies, RSV Infections Put Older People at Risk Too