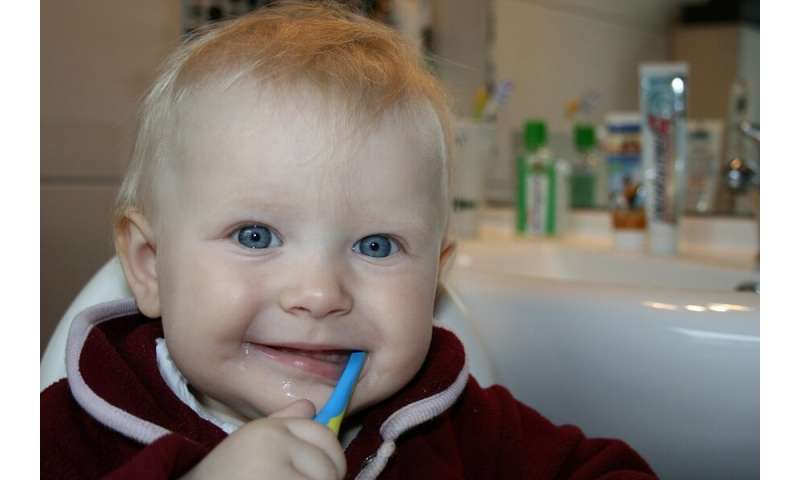 Research led by the University of Birmingham has revealed that just three percent of children in England visited the dentist before their first birthday.

Analysing the 2016/17 NHS Dental Statistics for England Annual Report, researchers at the University of Birmingham’s School of Dentistry in collaboration with the University of Edinburgh and Public Health England, also found that nationally only 12 percent of children had visited the dentist by their second birthday.

The research, published in Community Dental Health, also found that there were significant variations between local authority areas in the rate of children visiting dentists – with surprisingly a higher number of children in areas of deprivation visiting the dentist compared to those in more affluent areas.

Lead author Candy Salomon-Ibarra, of the University of Birmingham, said: “Our findings were unexpected as we had anticipated seeing higher levels of attendance in more affluent local authorities, but this was not the case.

“We explored with private dentistry providers whether children were being seen privately instead, but this does not seem to be the explanation.

“More studies are needed to explore the reasons for such variations in rates of dental visits, such as a lack of local initiatives to encourage attendance or difficulties accessing NHS care.

“The fact that so few children nationally under the age of two attend the dentist, no matter where they live or their economic circumstances, shows that policy makers face enormous challenge attempting to improve this situation.”

Dr. John Morris, Senior Lecturer in Dental Public Health at the University of Birmingham, added: “There is broad consensus that children should have a dental examination from a dentist as soon as the first teeth erupt, and no later than the child’s first birthday.

“Early dental visits not only provide parents with information they require to prevent early childhood oral health issues, but it is also believed that such dental visits familiarise children with the dental environment and reduce future dental anxiety.

“Poor oral health can cause pain and infection, which can affect eating, sleeping, socialising and learning, yet worryingly our research suggests that there is a widespread lack of understanding of the importance of taking children to the dentist before their first birthday despite considerable investment in encouraging parents to take their child to the dentist.”

The researchers said that the NHS spends approximately £3.4billion per annum on dental services. In the two years to March 2016, tooth extraction was the main reason for hospital admission in five to nine-year olds and the sixth most common procedure in those aged under five. In 2017, the British Society of Paediatric Dentistry, in partnership with the Office of the Chief Dental Officer England, launched a “Dental Check by One” campaign to promote the importance of children attending the dentist by the age of one.

In the same year, NHS England started a new programme, “Starting Well,” in 13 high priority areas targeting children aged under five years who do not currently visit a dentist.

Janet Clarke, Chair of the West Midlands Local Dental Network at NHS England and NHS Improvement—Midlands, said: “This study paints a worrying picture of the number of very young children attending the dentist, and shows that we have still have work to do to try and address it.

“In the West Midlands, the NHS is running a public-facing campaign titled A Little Trip To The Dentist focused on encouraging more parents to start thinking about oral health early by highlighting the many benefits of check-ups at a young age – even before teeth come through.

“Many parents have fed back saying they simply weren’t aware of the need to take their children until they have a full set of milk teeth, so by raising awareness, we’re hopeful we might start to see the numbers increase in our region and beyond.”

Claire Stevens, spokesperson for the British Society of Paediatric Dentistry (BSPD) and a Consultant in Paediatric Dentistry, commented: “This latest research provides a useful baseline. Until recently parents were told to take their child to the dentist by school age which is clearly not soon enough.