People in British cities are getting fatter faster than those in rural areas, researchers have found.

However, this trend, which has been unfolding since 1985, is the opposite of what is happening on the global scale.

Scientists found in some countries people living in the countryside are responsible for as much as 80 per cent of the increase.

Higher levels of poverty in cities in the UK may be to blame for the difference, one researcher said, with poorer people finding it harder to get healthy food. 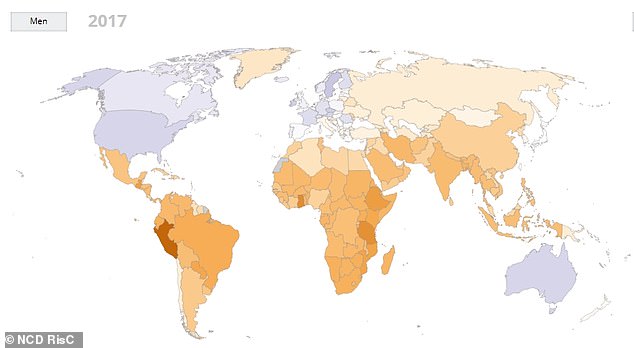 An map created by the researchers showed how obesity levels differ between urban and rural areas around the world. Countries which appear blue or grey have higher levels of obese men in rural areas, while those in brown and orange are fatter in cities

Researchers led by Imperial College London and the University of North Carolina analysed the heights and weights of 112million people between 1985 and 2017.

They found that, globally, obesity is becoming more common more quickly in rural areas outside of major cities and towns.

In rural areas people’s Body Mass Index (BMI) scores, a measure of obesity used by the NHS, increased by 2.1kg/m2 over the 33 years.

This may be because people who were once in poverty, struggling to afford food and working difficult manual jobs like farming, are becoming more wealthy.

And though now with enough money to afford cars, do less physical work, and buy more food – they aren’t rich enough to eat high quality food or live near gyms, the study suggests.

In the UK, however, the rise was 2.6 for both sexes in cities, but 2.5 for rural men and only 2.2 for rural women – figures which both buck the international trend and also show a bigger weight increase than the global average.

Brits’ average BMI rose 10.6 per cent in urban areas compared with 9.5 per cent in the countryside.

Women are heavier in urban areas in the UK, while men are more likely to be overweight in the countryside – in 1985 rural people of both sexes were heavier.

One reason for this could be that the areas where poorer people typically live are different in the UK to in other countries, according to Professor Majid Ezzati, from Imperial College. 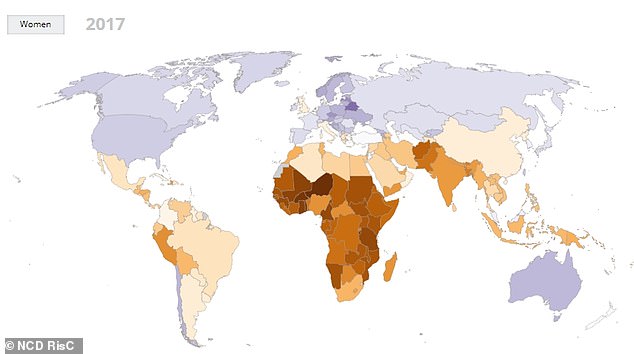 In countries which appear blue or grey women are typically heavier in rural areas, while those in brown and orange are fatter in cities 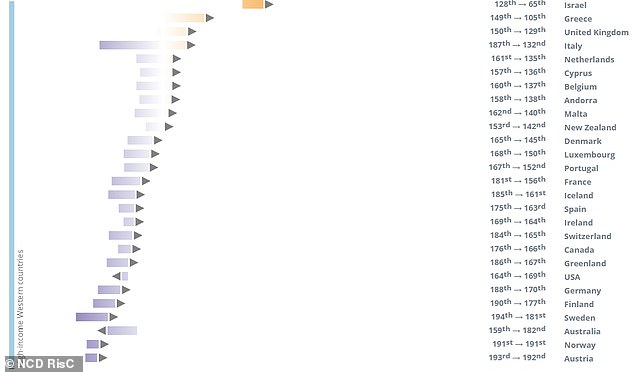 In the UK women are more likely to be overweight in urban areas, a trait shown by the line moving towards the right of the graph and into the orange area – this is the opposite of what is seen in the majority of comparable Western countries 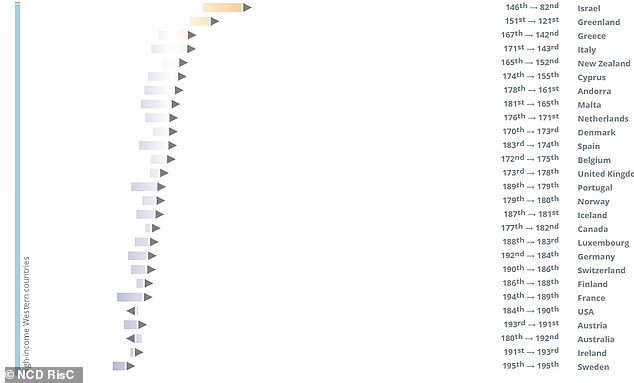 Men in the UK are slightly more likely to be overweight in rural areas (shown by a blue line protruding to the left), the opposite of women and in line with other comparable nations

A report by the Food Foundation think-tank found 5,809 new takeaways opened on UK streets in the three-and-a-half years to February.

One in every four food retailers is now a takeaway, according to data analysed for the report by Cambridge University.

Experts said some places are becoming ‘swamped in junk food’ – with fast food outlets making up almost 40 per cent of all food retailers in the worst-hit areas and there being more takeaways in poorer areas.

The poorest 10 per cent of UK households would have to spend three-quarters of their disposable income on food to afford a ‘healthy diet’, as defined by the Government.

Blackburn, Hyndburn and South Ribble in Lancashire and Harlow in Essex have the highest concentration of takeaways, with close to four in ten of all food retailers selling junk food.

Supermarkets are also geared towards selling fatty, sugary, salty products, with food defined as ‘healthy’ by the Food Standards Agency costing an average of £7.42 per 1,000 calories, compared to £2.42 for 1,000 calories of ‘less healthy’ food.

‘The geography of poverty in the UK is different,’ Professor Ezzati, who worked on the study, told MailOnline.

‘In the US, for example, there is notably more poverty in rural areas. But in the UK there are really large areas of urban poverty like in the north-east and in east, north and south London.’

In these areas, although people may live and work close to well-stocked supermarkets and leisure centres, they may not have the money or the time to live well.

‘It can be hard for a poorer person to eat healthily,’ Professor Ezzati added.

‘Someone working two zero-hour contract jobs just to make ends meet will find it hard [and they will] have easy access to bad things.’

He said the concentration of cheap takeaways in city centres may be a contributing factor, suggesting healthy foods like fresh fruit were prohibitively expensive in comparison.

And the trends have changed the geography of obesity in countries around the world.

In 1985, urban men and women in over three-quarters of countries were heavier than their country-living counterparts.

Over time, the gap between urban and rural BMI in many of these countries shrank or even reversed.

‘Discussions around public health tend to focus more on the negative aspects of living in cities,’ said Professor Ezzati.

‘In fact, cities provide a wealth of opportunities for better nutrition, more physical exercise and recreation, and overall improved health. These things are often harder to find in rural areas.’

He added that as the lives of people living in rural areas become increasingly modern, they are more likely to be exposed to poor-quality, cheap, processed foods.

The research is published in the journal Nature.