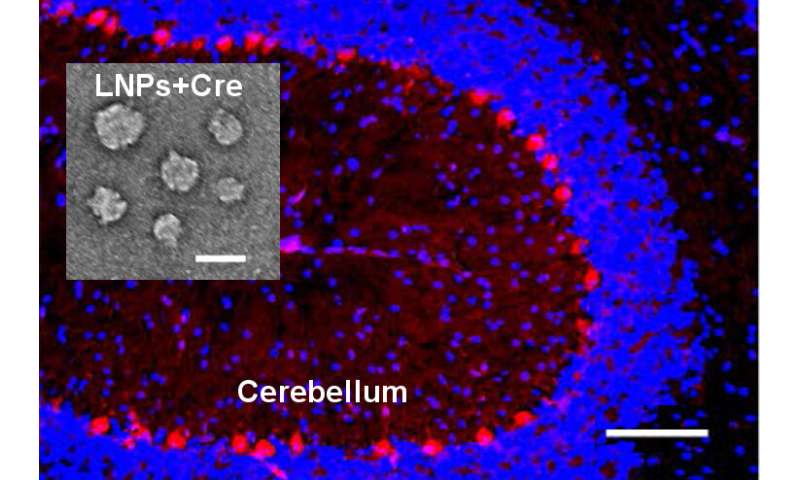 Biomedical engineers at the Tufts University School of Engineering have developed tiny lipid-based nanoparticles that incorporate neurotranmitters to help carry drugs, large molecules, and even gene editing proteins across the blood-brain barrier and into the brain in mice. The innovation, published today in Science Advances, could overcome many of the current limitations encountered in delivering therapeutics into the central nervous system, and opens up the possibility of using a wide range of therapeutics that would otherwise not have access to the brain.

“The power of our method is that it is extremely versatile and relatively non-disruptive,” said Qiaobing Xu, associate professor of biomedical engineering at Tufts University and corresponding author of the study. “We can deliver a wide range of molecules by packaging them into the lipid-based nanonparticles without chemically modifying the drugs themselves. We can also achieve delivery across the blood-brain barrier without disrupting the integrity of the barrier.”

Xu cautioned that more studies and clinical trials are needed to determine the efficacy and safety of the delivery method in humans.

The blood-brain barrier consists of a layer of endothelial cells that line the blood vessels in the brain and allows only a highly select set of molecules to pass from the bloodstream into the fluid surrounding the neurons and other cells of the brain.The ability to safely and efficiently deliver therapeutic molecular cargos across the barrier and into the brain has been a long-standing challenge in medicine.

The treatment of neurodegenerative disorders, brain tumors, brain infections and stroke has been limited by the difficulty in safely delivering small molecule drugs and macromolecules, such as peptides and proteins, into the brain. Current approaches, such as direct injection or disruption of the barrier to make it “leaky,” are fraught with risks, including infection, tissue damage and neurotoxicity. The use of carriers, such as modified viruses and monoclonal antibodies to ferry cargo into the brain, has limitations, including production cost and safety. Other carriers, such as nanoparticles, nanocapsules and polymers, have shown promise but the modifications required to ensure delivery can be complicated.

The study authors made use of the fact that certain neurotransmitters have the chemical “passport” required to gain access throughout the brain. By attaching a lipid (fat-like) molecule to the neurotransmitter, the resulting NT-lipidoid can be doped into lipid nanoparticles (LNPs) – tiny bubbles of lipid that can encapsulate other molecules within, in particular therapeutic drugs. The LNPs can be injected intravenously, and carry the drugs to the blood-brain barrier, while the NT-lipidoid helps the LNPs to carry the drugs across the barrier. The LNPs can then fuse with neurons and other cells in the brain to deliver their therapeutic payload.

Using the LNPs with NT-lipidoid, the researchers successfully delivered into the brain of a mouse:

The researchers observed the effect of diminished tau protein, as well as direct evidence of the gene editing protein entering neurons. In fact, the latter was the first demonstration of genome editing within neurons delivered via intravenous injection, according to the researchers.

While more studies and clinical trials are needed, the delivery method could be a significant advance in convenience and a general application for central nervous system drug delivery. The Tufts researchers found that the addition of the NT-lipidoid to many varieties of LNPs can render them permeable to the blood-brain barrier. That means that LNPs can be optimized for lipid length and ratios to package drugs of different types, from small molecules to DNA to large enzyme complexes, and then provided the same blood-brain barrier permeability by addition of the NT-lipidoid.

People with COVID-19 often lie about symptoms and distancing, according to research

Move it or lose it: Sitting around while avoiding COVID-19 creates other health risks