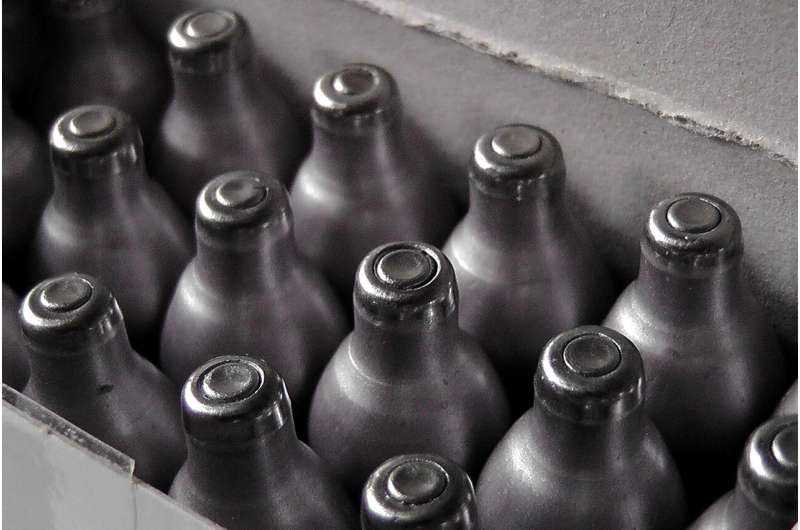 Medical professionals are calling for tighter restrictions on the sale of nitrous oxide gas cartridges, colloquially known as “nangs,” due to potentially serious harm for users including lasting neurological damage. Nitrous oxide or “laughing gas” is normally used by dentists and medical professionals to provide sedation and pain relief to patients undergoing minor procedures. It’s also a food additive, used to aerate whipped cream, and sold in gas cartridges online and in convenience stores.

An increasing number of Australians are also using nitrous oxide recreationally, inhaling the gas to produce a fleeting feeling of euphoria and excitement. Many people who use the drug consider it to be relatively harmless, but according to experts from the National Drug and Alcohol Research Center (NDARC) at UNSW Sydney, this is far from the case.

Among people who regularly use ecstasy and/or other illicit stimulants, surveyed by NDARC as part of the Ecstasy and Related Drugs Reporting System (EDRS), nitrous oxide use has jumped in recent years. From 2003 to 2015, approximately one-quarter of the group reported nitrous oxide use in the past six months. This proportion doubled to 50% in 2018 and has remained at a similar level since. The frequency and quantity of nitrous oxide use among these participants has remained relatively low and stable over time.

Less is known about nitrous oxide use in the general population, but this also appears to be increasing over time. The Australian Institute of Health and Welfare (AIHW) reported in their National Drug Strategy Household Survey that past year use of inhalants, which included nitrous oxide, increased from 0.4% of participants in 2001, to 1.7% in 2019.

So why are “nangs” being used more often?

“It’s always tricky to say why a particular drug might be increasing in use or popularity. But it potentially could be related to perceptions of safety,” said Dr. Rachel Sutherland from NDARC, who is Deputy Program Lead of Drug Trends.

“It’s also quite easily available—you can purchase it very easily at convenience stores or online. And it’s pretty cheap.”

With increased use of nitrous oxide among some groups, there have been increased reports of harm. For example, in a recent study of 60 emergency departments across New South Wales, presentations related to nitrous oxide use have increased from less than 10 in 2012 to more than 60 in 2018.

According to Professor Shane Darke from NDARC, recreational nitrous oxide use has the potential for harmful effects in the short and longer term.

“If you’re in a medical situation and you’re being given nitrous oxide… it’s mixed with oxygen. These people aren’t doing that. What they’re doing is covering their faces and inhaling pure gas,” Professor Darke said.

“Now the problem with that is there’s no oxygen. You run the risk of asphyxia.”

While using nitrous oxide, people are also at risk of entering a delirious state, according to Professor Darke. “They can be a risk to themselves and others. There have been spontaneous suicides and accidents.”

Emergency physicians have also started noticing people presenting with jerking and odd movements after using nitrous oxide. That’s not just an unsteady gait due to intoxication—rather, a sign of significant nerve damage.

“[Nitrous oxide] interferes with the absorption of Vitamin B12. This leads to neurological damage and eventually in severe cases, spinal degeneration,” Professor Darke said. “In an acute case you might be able to reverse that with infusions of B12. But in chronic cases it’s irreversible.”

It’s important to note people with neurological symptoms have been heavy users of nitrous oxide, inhaling the gas every day for months and consuming hundreds of canisters at a time. More research is needed to understand the effects of light to moderate use, which may still carry risk of nerve damage.

Current harm reduction efforts may not be enough

On October 1, 2022, the Therapeutic Goods Administration (TGA) implemented the reclassification of nitrous oxide as a Schedule 6 poison, which means product labels must contain warnings and safety directions. Some states, including Western Australia and South Australia, have introduced restrictions on purchasing nitrous oxide, such as age limits. However, more action may be needed to curb harms to recreational users.

AI can calculate personalized risk of having another stroke, new study shows