NHS has LOST 700 GPs in three years since the Government’s promise to recruit 5,000 extra family doctors by 2020

The NHS has lost almost 700 GPs in the past three years despite a Government promise to hire 5,000 more.

The pledge made four years ago by Theresa May and former Health Secretary, Jeremy Hunt, is on track to fail and the current Health Secretary, Matt Hancock, has already admitted it could take another five years to achieve.

Health bosses have launched desperate bids to pay foreign doctors to join the NHS or bump up existing GPs’ pensions to persuade them not to leave.

Experts said the dwindling number highlighted a ‘crisis’ in doctors’ surgeries and that GPs were under ‘tremendous pressure’ and ‘fighting a losing battle’. 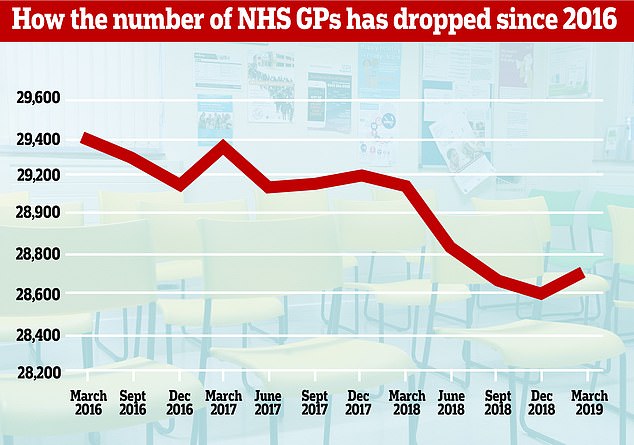 NHS Digital today released statistics laying bare the size of the workforce in GP practices across the country.

The health service said there are now 7,302 more full-time equivalent GP staff than there were three years ago.

And over the past year the numbers of GPs, pharmacists, nurses and other practice staff have all risen.

March saw the first rise since December 2017 and, since March 2016 – the first year after the Government’s five-year promise – the number of GPs has dropped by 682.

Labour’s Shadow Health Secretary, Jonathan Ashworth, said: ‘These figures highlight the ongoing crisis in primary care, and come after years of the most severe funding squeeze in the history of the NHS under the Conservatives.

‘Our GPs are overworked and under-resourced with many experiencing burnout.’

Professor Helen Stokes-Lampard, chair of the Royal College of General Practitioners, said: ‘A lot of hard work has gone into boosting recruitment into general practice and as a result, we have more GPs in training than ever before. But it takes at least 10 years to train a family doctor from entering medical school, and we need more GPs now.

‘If more GPs are leaving the profession than entering it, we are fighting a losing battle.’

HOW IS THE NHS TRYING TO HIRE MORE DOCTORS?

She added: ‘The government promised in the GP Forward View that we would see 5,000 more GPs by 2020, as well as 5,000 more members of the wider practice team.

‘While the latter has been exceeded, and it’s imperative we keep this momentum up, it is the number of GPs that we remain desperately short of and without resolving this we will struggle to continue providing the world-class care our patients expect and deserve.

‘Being a GP can be the best job in the world – it’s intellectually stimulating, hugely varied, and rewarding – but we need to make it a more attractive career option for those who, because of the pressures, feel disenchanted, as well as doctors who have already taken the decision to leave.’

The NHS figures quoted above do not include registrars, who work as GPs but are still training and not fully qualified to practise without supervision.

In an interview with GP magazine, Pulse, in January, Mr Hancock said the recruitment drive to train and employ more GPs was ‘actually going quite well’.

He said: ‘Clearly the timing of that will be slower than was originally envisaged before my time. But what matters is making sure that we get that figure reached.’

And he added: ‘We haven’t put a date on it. We’re just getting on with it.’

The NHS also pledged in its forward plan to increase funding for GP practices to be at least £2.4bn per year higher by 2020/21.

But a struggle to recruit more GPs is translating to more patients per doctor, leaving the medics with bigger workloads and patients facing longer waiting times.

He said: ‘The steady increase in patient demand coupled with hundreds fewer full-time equivalent GPs means that practices across the country are being placed under tremendous pressure and leaving too many patients waiting too long to see their GP.’

NHS data also reveals that seven GP practices in England are now listed as having more than 50,000 patients on their books.

‘Today’s figures highlight the good work being done locally to support GPs through retention schemes and flexible working, as well as taking on more trainees.

‘A significant increase in the number of other health professionals such as nurses, pharmacists and physicians that work alongside GPs means patients can get more timely and appropriate access to a wider range of highly trained staff.

‘This supports family doctors to focus on patients with the most complex conditions and eases the workload pressures our GPs face.’

More than 2.5 million patients across England could see their GP surgeries close in the next five years, experts revealed in November.

The Royal College of General Practitioners said 762 practices in the UK are at risk of closing within the next five years because at least three quarters of their doctors are aged 55 or over and approaching retirement.

Experts said so many closures would have a ‘catastrophic’ effect on the health service.

Appointment waiting times could get even longer, workloads would grow and more people could end up queueing at A&E for minor illnesses.

Campaigners warned the potential closures would be ‘dangerous’ for patients and are calling for ‘drastic action’ to encourage new GPs to join the profession.

The situation is worst in Southend in Essex, where 13 of the area’s 35 GP practices are at risk of closing, potentially affecting nearly 39,000 patients.

A third of surgeries in the London borough of Havering could shut down, and more than 85,000 patients could lose their GP in Sandwell and West Birmingham.

Only around a quarter of areas of England have no practices at risk of closure, according to the RCGP’s estimates.