NHS doctors are prescribing patients heating this winter as part of a cost-of-living trial.

The ‘Warm Home Prescription’ pilot, funded by taxpayers, has so far paid to heat the homes of 28 patients on low incomes.

It will be rolled out to 1,150 more across Gloucestershire, Aberdeenshire and Teeside because of its ‘mind-blowing’ success.

Patients given the prescriptions, which sees money credited directly to their energy accounts, have conditions worsened by cold weather, such as arthritis.

Prescribing heating can stop their illnesses from deteriorating, reducing their odds of needing hospital care and saving the cash-strapped NHS millions in the long-run. 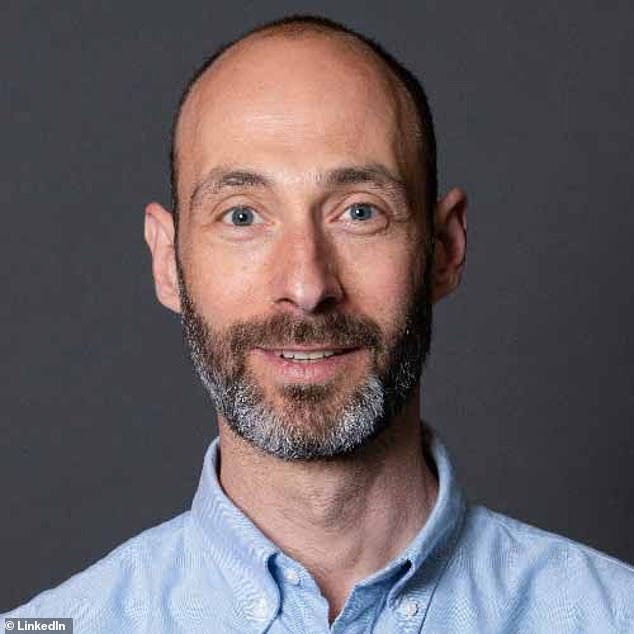 Academics estimated that cold homes cost NHS England £860million each year. But that figure was before the cost-of-living crisis hit and energy bills soared.

Ms Davis, who has arthritis and a serious lung condition, said she ‘tends to seize up’ during the winter. She told the BBC: ‘It’s very painful, my joints ache and my bones are like hot pokers.

In winter 2020, Ms Davis said she spent most of the time in bed but during the trial in 2021 that was not the case.

She said: ‘You’re not stuck in bed, you’re not going to hospital. My children were able to have a life. They were able to go out and play and get cold.’

Ms Davis, who described the difference the energy bill trial made as ‘mind-blowing’, got emotional as she described warming her children’s pyjamas on the radiator and being able to enjoy Christmas.

The organisation behind the trial is Energy Systems Catapult, who were backed by GP surgeries and a Gloucester-based energy charity called Severn Wye.

NHS social prescribers who visit patients with long-term conditions in their homes were able to inform the trial of the patients who would most benefit.

Dr Matt Lipson, who helped design the pilot, said: ‘If we buy the energy people need but can’t afford, they can keep warm at home and stay out of hospital.’ 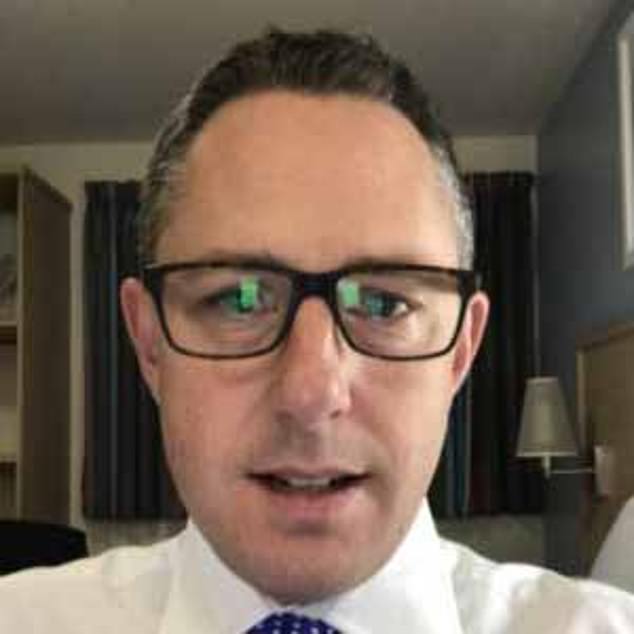 NHS social prescribers who visit patients with long-term conditions in their homes were able to inform the trial of the patients who would most benefit (Pictured: Dr Hein le Roux whose surgery is part of the pilot)

He said this targets support to where its needed and saves money, which lessens the pressure on the NHS.

Dr Lipson said patients were seeing much quicker results than with medication and that ‘it was taking days, not weeks and months’.

Dr Hein le Roux, whose surgery in Churchdown took part, said it had saved money and helped the workload of healthcare staff.

He said it was a ‘fantastic feeling’ knowing he was doing his job properly rather than only going out to see sick people.

Ms Davis’s energy costs have risen to more than £250-a-month this year and as she does not yet know whether she will be part of the 2022 trial, she has been cutting down her usage.

But she said one year of the trial has helped and that if more were able to take part it could ‘really change people’s lives’.

Ian Copete, 41, who is hooked up to a kidney dialysis machine, faces an energy bill nightmare – but says his young daughter keeps him warm with blankets and cuddles.

Mr Copete, from High Wycombe, says hugs and hot drinks from Lyra, nine, are giving him the heat he needs as their household energy bills soared from £150 to £400-a-month.

He says it has left them with no choice but to leave the heating in their small two-bed flat – that he lives in with Lyra and his wife Heather – off until December.

The family sometimes rely on heat from the oven when it’s on.

The primary school teacher has suffered from chronic renal disease since he was born – causing him to have had four kidney transplants in his life. 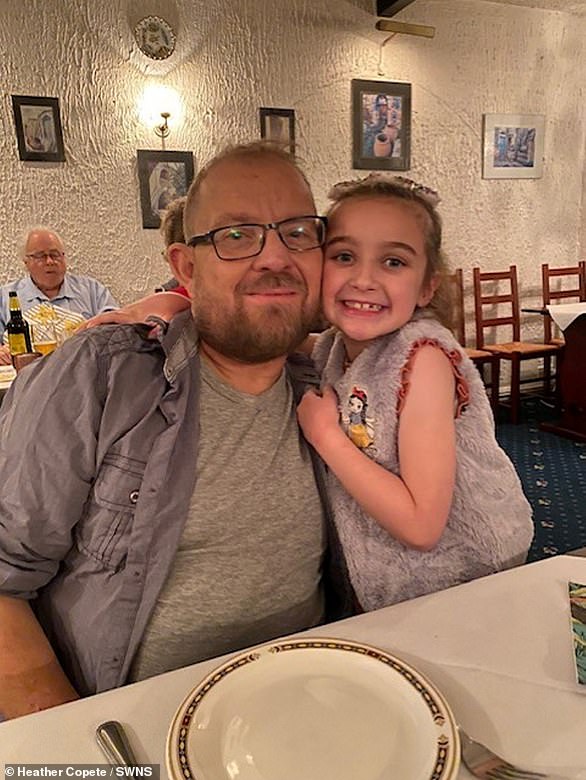 Ian Copete, 41, who is hooked up to a kidney dialysis machine, faces an energy bill nightmare – but says his young daughter keeps him warm with blankets and cuddles

Due to NHS cost-cutting measures, he can only do dialysis for the minimum-required 12 hours in hospital each week, rather than the 20 hours per week he needs to stay healthy enough to work.

As a result he has to choose between dialyzing at home at huge expense to stay healthy enough to work, or not working.

The energy price cap has barely affected him as it is based on average energy use per month, leaving the family massively out of pocket even with Government welfare support.

Mr Copete said: ‘It’s terrible but I almost feel lucky to have had the condition all my life, because it has meant I can push through and I’m used to how I feel – where other patients may experience such shock at the symptoms and most cannot work.

‘I try to do up to 20 hours of dialysis a week because obviously the more you do, the better you feel and healthier you are.

‘Normal kidneys work all the time, but mine are totally inactive, so in effect the only time I have any renal function is while I’m on the dialysis machine. 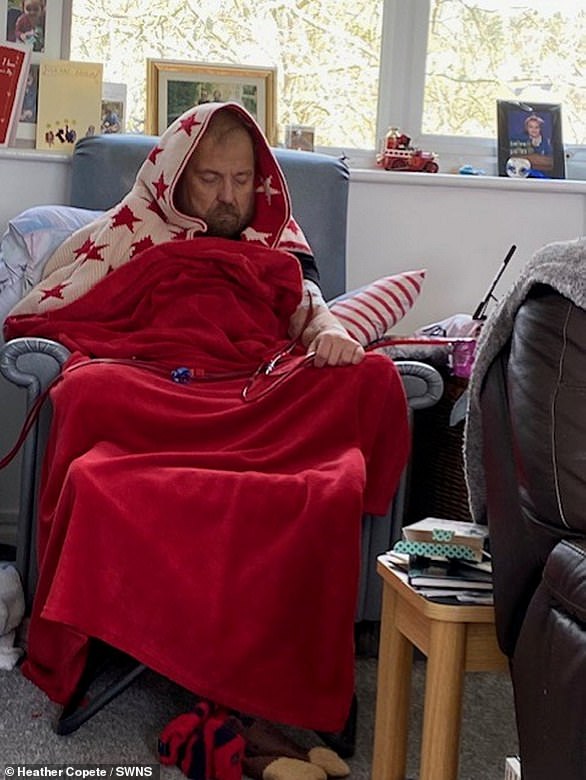 Pictured: Mr Copete under blankets while on dialysis, as his bills soar from £150 to £400-a-month

‘My wife is very good at heat saving ideas; we have big thick curtains to conserve heat, we leave the oven open after we use it to get free heat, and we use the dryer to heat our house and dry our clothes at once.

‘It’s better than nothing, and we have a lot of blankets. We should be able to have the heating on – but we’re determined to try and see it through to December because we can’t afford it.

‘My daughter Lyra will come and bring me blankets, she’ll make me a hot drink, give me a cuddle, she’s been amazing.

‘But she shouldn’t have to – we should be able to afford to turn on the heating.

‘She’s even helped when I’ve had major bleeds before or even seizures during dialysis because my blood pressure dropped so low.

‘She’s an incredible little girl, and she deserves the attention and getting to see the Christmas lights and me being at home.

‘We just want to give her as much of a life as we can because she earns it on a daily basis.’

Mrs Copete says she feels helpless watching him shiver under a blanket. 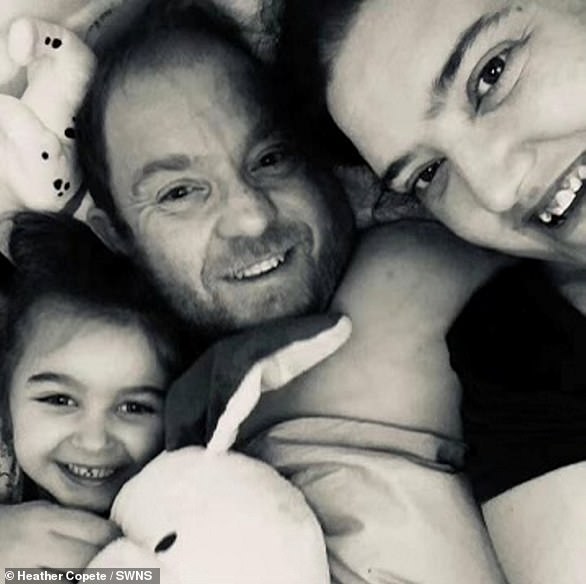 She said: ‘Lyra is so good with him, she wraps him up in a blanket and she cuddles him to keep him warm.

‘We just pull together as a team because it’s the only way we can get through these difficult times.’

Mr Copete says that cost saving measures and demand from patients in NHS hospitals for dialysis has meant that patients are experiencing a ‘shadow tax’ on their health by paying the energy bills needed to stay healthy and work.

He said: ‘My wife has to start Christmas shopping in January after the following Christmas so we have stuff to get her – we have to think that far in advance.

‘The issue a lot of people who have to dialyse are having now is that they have the fear of doing it themselves at home, combined now with the cost, which means that a lot now only want to do it in hospital.

‘I don’t mind going to hospital, but I don’t like being away from home and my daughter.

‘I’ve missed two of her birthdays and a new years because I’ve been in hospital before, which is terrible because there is nothing I can do about it, so when I can be at home I want to be at home.

‘The announcement from the Government the other day to increase the aid we get in line with inflation doesn’t affect us until April, so that doesn’t really help us out as we’ll be through winter already.’

South Africa has lifted most COVID-19 restrictions, but risks remain

Heart disease: The popular ingredient consumed by millions could be boosting your risk