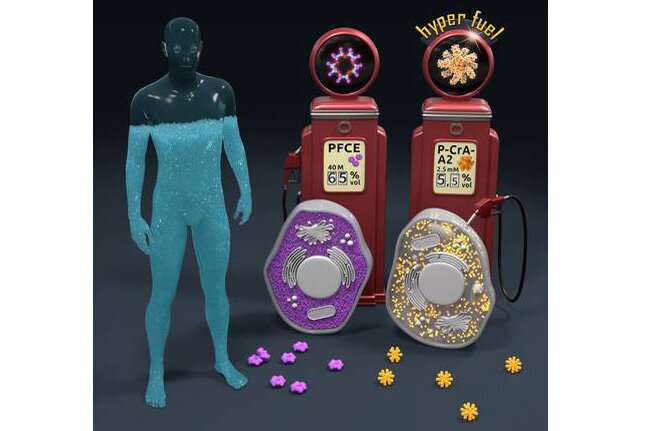 A group of researchers led by Leif Schroeder from the Leibniz-Forschungsinstitut fuer Molekulare Pharmakologie (FMP) have found a way to detect metastases in certain types of cancer in the brain at an early stage, using only minimal amounts of contrast agent. To this end, the team uses a synthetic molecule that helps to detect the formation of new blood vessels, producing much more sophisticated imaging than is possible with conventional methods of diagnosis. The results have now been published in Advanced Biosystems.

Some types of cancer—including breast cancer—may induce the formation of brain metastases. Increased development of new small blood vessels (capillaries) is an early sign of abnormal tissue changes. Conventional contrast agents used in magnetic resonance imaging (MRI) for examining the brain are not suitable for the direct and early detection of newly forming cells. “For this, we need a contrast agent that considerably increases the sensitivity of MRI by greatly improving the contrast structure, and that is only needed in tiny amounts,” explained FMP researcher Dr. Leif Schroeder.

His group has been working for a long time to develop new contrast agents that detect artificially magnetized xenon in tissue and that cause signals even in small quantities. In his efforts to create a contrast agent especially suited for use in vascular cells of the so-called blood-brain barrier, the physicist was able to draw on preliminary work undertaken by his FMP colleague Dr. Margitta Dathe, who had developed a similar structure for drug transport to these cells in inner vascular walls of the brain. This peptide structure forms so-called micelles, aggregates of around 19 molecules that cluster spontaneously.

To utilize micelles for diagnostic purposes, Schroeder and his team had them modified: “We inserted molecular cages—synthetic molecules shaped like a hollow soccer ball—that we can temporarily fill with xenon. We were therefore able to ‘switch on’ 19 xenon loads per micelle for the image contrast, enabling us to directly visualize this type of tumor-forming cells,” reported Leif Schroeder.

First, he and his team tested whether the modified version of the structure developed by Margitta Dathe would still form micelles. “Fortunately, the molecules behaved in the same way, despite the insertion of cages, and formed micelles composed of 19 units each,” the researcher remarked. The micelles were then supposed to interact with large amounts of xenon.

Having a high local density of cages is a prerequisite for visualizing blood vessel cells in MRI. In a further step, the researchers tested whether xenon could enter the cages inside the molecules—this also proved successful. Schroeder then investigated how micelles equipped with xenon behave in two cell cultures, one of which comprised cerebral cells. In this case, the micelles docked onto blood vessel cells and labeled them—the newly developed contrast agent worked. To check their findings, Leif Schroeder also tested the micelles in aortic cells. Since this type of cell is structured differently, however, there was much less binding of micelles in this case.

The advantage of the new method is that the spread of malignant tumors to the brain can be detected early, before the onset of widespread metastasis. This is because, when metastasis occurs, brain areas exhibit increased formation of blood vessels, which are needed to supply nutrients to tumor tissue. In the case of breast cancer, this type of metastasis is often associated with a poor prognosis. Blood vessels absorb the micelles developed by Schroeder’s and Dathe’s team, and xenon enables the process of new vessel formation to be visualized directly—at an early stage. Conventional methods for labeling certain cells for MRI are much less sensitive. A comparison showed that alternatives involving fluorine contrast agents are around 16,000 times less efficient.