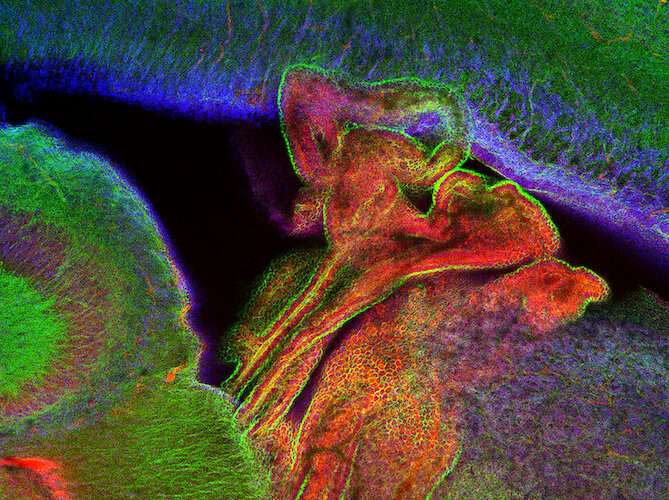 Meningitis is associated with high mortality and frequently causes severe sequelae. Newborn infants are particularly susceptible to this type of infection; they develop meningitis 30 times more often than the general population. Group B streptococcus (GBS) bacteria are the most common cause of neonatal meningitis, but they are rarely responsible for disease in adults. Scientists from the Institut Pasteur, in collaboration with Inserm, Université de Paris and Necker-Enfants Malades Hospital (AP-HP), set out to explain neonatal susceptibility to GBS meningitis. In a mouse model, they demonstrated that the immaturity of both the gut microbiota and epithelial barriers such as the gut and choroid plexus play a role in the susceptibility of newborn infants to bacterial meningitis caused by GBS. The findings were published in the journal Cell Reports on June 29, 2021.

Newborn infants are more likely to develop bacterial meningitis than children and adults. Group B streptococcus (GBS) is the pathogen responsible for a significant proportion of cases of neonatal meningitis. In most instances, infection is preceded by bacterial colonization of the gut. The commensal bacterial gut flora (known as the microbiota) plays a key physiological role, as it is involved in digestion, offers protection from gut pathogens and contributes to tissue differentiation and immune development. Newborns have no gut microbiota; it gradually develops in the first few weeks after birth.

In a new study, scientists from the Institut Pasteur, in collaboration with Inserm, Université de Paris and Necker-Enfants malades Hospital (AP-HP), demonstrated in a mouse model that the immaturity of the gut microbiota in neonates is involved in neonatal susceptibility to meningitis caused by GBS. In the absence of a mature microbiota, the bacteria can extensively colonize the gut. In the absence of a mature microbiota, the barrier function of blood vessels in the gut that the bacteria must cross to reach the brain through the bloodstream is also less effective, and the immune system is unable to control infection.

Unexpectedly, the scientists also demonstrated that, independently of the microbiota, the epithelial barriers formed by the gut and the choroid plexus (the interface between the blood and the cerebrospinal fluid that irrigates the brain) are not entirely mature in newborns, which facilitates bacterial access to the brain. The signaling pathway known as the Wnt pathway, which is involved in tissue growth and differentiation, is more active in newborns, resulting in a less effective barrier function at the gut and choroid plexus levels in neonates.

“In this study, we show how two factors associated with infancy—the immaturity of the gut microbiota and the growth of gut and choroidal epithelial tissues—play a role in the susceptibility of newborn infants to meningitis caused by GBS, at all stages of infection from gut colonization to dissemination in the brain,” explains Marc Lecuit (university professor/hospital practitioner, Université de Paris and Necker-Enfants Malades Hospital), head of the Biology of Infection Unit at the Institut Pasteur and Inserm and last author of the study.