Mother, 34, is cancer-free after doctors spotted a one-in-500,000 form of the disease when her symptoms flared up during pregnancy

A pregnant woman was diagnosed with cancer after doctors stumbled across her tumour when her growing baby aggravated her symptoms.

Rachel Avon was forced to have her appendix removed while six months’ pregnant after developing sharp pains in her side.

While operating on what they thought was appendicitis, the surgeons discovered the now 34-year-old had pseudomyxoma peritonei, which typically starts in the appendix and affects just one in every 500,000 people.

The weight of her growing baby is thought to have caused the mother-of-two’s cancer symptoms to flare-up. The surgeons managed to remove both her appendix and the tumour in the same procedure.

The medics then made the controversial decision not to tell the primary school teacher or her husband Ross Avon, 35, she had battled cancer until after she gave birth to their daughter Cari.

This is due to safety concerns over pregnant women having MRI scans, which detect whether cancer has spread.

After finally being told she had unknowingly battled the disease, a scan revealed no signs of any remaining tumours, with Mrs Avon, of Newport, being declared cancer free five years on. 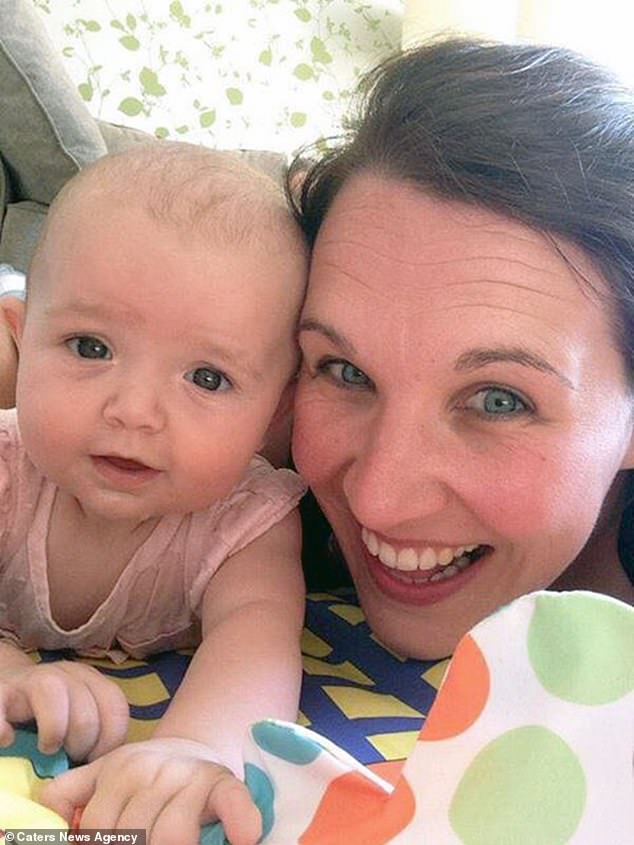 Rachel Avon was diagnosed with the rare cancer pseudomyxoma peritonei while pregnant with her daughter Cari (pictured together five years ago). The disease affects just two in every million people and typically starts in the appendix. The weight of the growing baby is thought to have caused her cancer symptoms to flare-up, leaving her with ‘agonising’ pains in her side 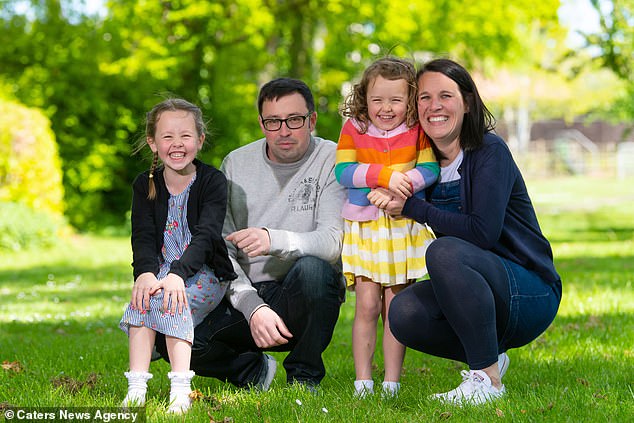 Mrs Avon went under the knife to have the appendix removed in suspected appendicitis. Surgeons then discovered the tumour, which they took out there and then. Mrs Avon is pictured recently with her husband Ross, and their daughters Ffion, six, (left) and Cari 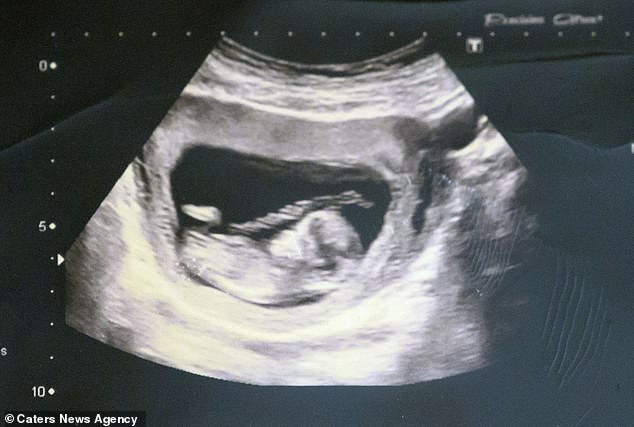 Speaking of the ordeal, Mrs Avon said: ‘Cari is a really special girl – without her, my cancer could have been a very different story

‘If it wasn’t for Cari my cancer wouldn’t have been picked up as quickly and things could have been a lot worse.

‘It was because of being pregnant that it triggered the issue with my appendix meaning I needed surgery – without the surgery, my tumour wouldn’t have been accidentally found.’

Pseudomyxoma peritonei is a very rare form of cancer that typically starts in the appendix and spreads to the pelvis.

It is thought to affect just two in every one million people.

Pseudomyxoma peritonei develops after a polyp within the appendix bursts through the organ’s wall.

This causes mucus-producing tumour cells to spread through the abdominal-cavity lining.

As these cells accumulate, the abdominal area becomes inflamed and gastrointestinal activity may slow.

Pseudomyxoma peritonei usually causes bloating of the abdomen, which is not painful to touch. It’s cause is unclear.

Without treatment, the intestines can become blocked, leading to malnutrition and life-threatening complications.

Some 65 per cent of patients are cured following treatment.

This usually involves surgery to remove the tumour.

To prevent the cancer cells re-implanting, the abdomen may be washed with a chemotherapy solution.

Mrs Avon became concerned after she developed ‘agonising’ pains in her abdomen while pregnant.

‘I was terrified it was linked to my unborn baby so I called the midwife,’ she said.

‘The midwife advised I go the hospital, which definitely got me thinking the worst.

‘After going to the hospital they believed I had appendicitis.’

Appendicitis describes the painful swelling of the appendix; the small pouch that connects to the large intestine.

Left untreated, the inflamed appendix can burst, spilling waste products into the abdomen.

The medics therefore had no choice but to operate.

‘I was really nervous – having surgery at six months’ pregnant was a huge thing but they said, despite being pregnant, they had to put my life before the baby’s’, Mrs Avon said.

‘It was an extremely difficult time, but as I was already a mum to Ffion, who was only one at the time, I understood I had to put myself first.’

While under the knife, doctor’s discovered the real cause of Mrs Avon’s discomfort but kept it to themselves.

Mrs Avon describes Cari (pictured together left) as a ‘really special girl’ and says ‘without her, my cancer could have been very different’. The mother-of-two (also pictured right) was not told she had battled cancer until after she gave birth. This decision was made by doctors due to pregnant women not being recommended MRI scans, which detect if tumours have spread 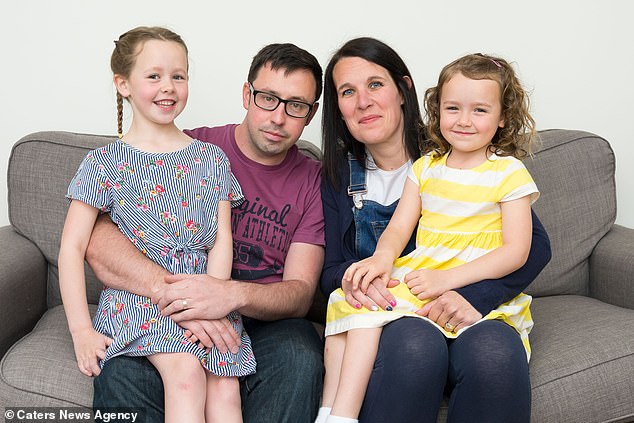 Mrs Avon (pictured with her family) was finally told about her cancer ordeal five days after Cari was born. An MRI scan showed no signs of the disease but she still required annual check-ups. Five years on, Mrs Avon is celebrating being officially declared cancer free

Four days after Cari was born, Mrs Avon’s consultant asked her to come back to the hospital for what the new mother believed to be a check-up following her surgery. It was then that Mrs Avon was finally told he had unknowingly battled cancer.

‘Doctors’ reasoning for not telling me until Cari was born was due to the fact I wouldn’t be able to have an MRI to see if the cancer had spread until after the baby was born.’

When Mrs Avon did come to have the scan, the results came back ‘clear’.

‘If the tumour was to have spread I’d have needed a major operation – something known as ‘the mother of all surgeries’ [MOAS] – as chemotherapy wouldn’t have worked,’ she said.

‘MOAS is where they remove all organs you don’t need and “internally wash” all the others to reduce the number of cancer cells.

‘It sounds terrible so I’m very lucky I didn’t need to have it.’

Mrs Avon required annual check ups to ensure the disease had not returned. Five years on, she has finally been given the all-clear.

‘Now, I’m healthier and happier than ever,’ she said. ‘I even recently ran the London Marathon to raise money for Cancer Research UK.

‘I’m determined to raise awareness of pseudomyxoma peritoneii to help other people.’ 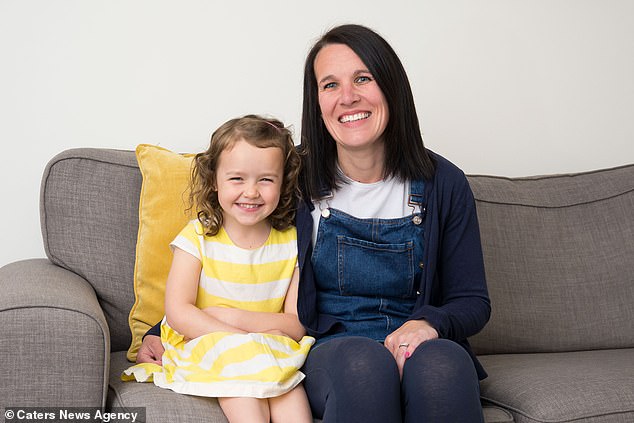 Alcohol can cause immediate risk of atrial fibrillation