A mother-of-two begged a surgeon to remove her leg because of a freak accident that left her battling pain for two years.

Gill Haddington, 42, from Morecambe, Lancashire, dropped a bottle of perfume on her foot in September 2015.

It caused her foot to swell to twice the size, develop sore ulcers, turn to the left and her toes curl underneath.

But X-rays showed no broken bones, and instead, Ms Haddington was diagnosed with chronic regional pain syndrome.

The condition is dubbed ‘suicide disease’ because the sheer pain drives people to the brink of death.

Ms Haddington, a former nursery nurse, needed to use a wheelchair to get around and relied on her daughters for support.

Eventually, after doctors recognised how miserable her life had become with the deformed foot, they removed her leg below the knee in May 2017. 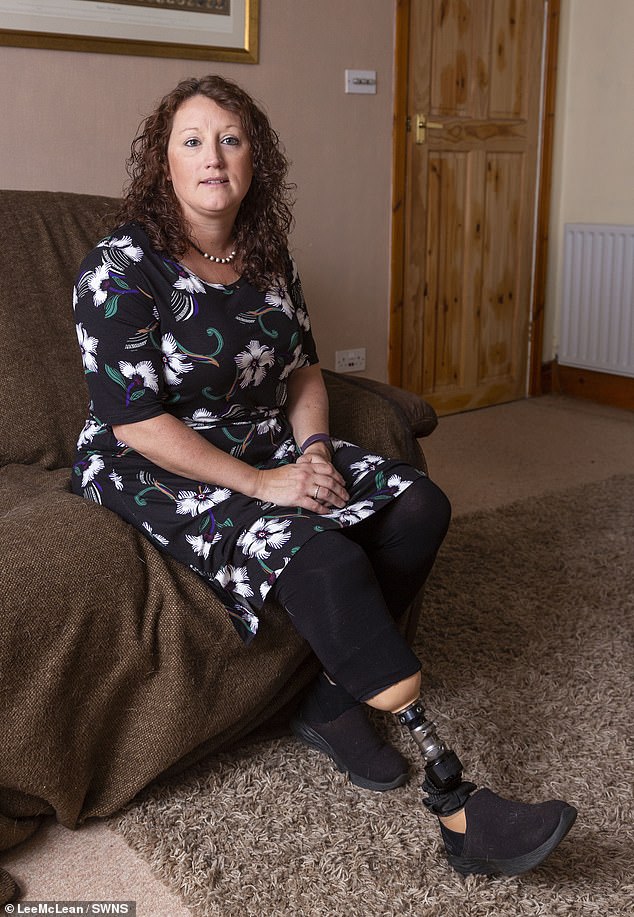 Gill Haddington, 42, had her leg removed below the knee after suffering years of pain 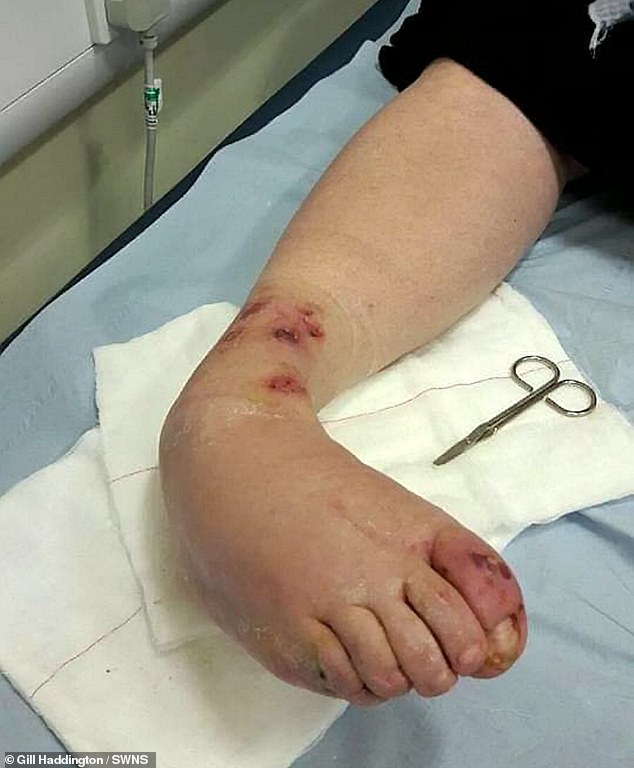 After dropping a perfume bottle on her foot in September 2015, Ms Haddington saw her foot swell to twice the size, develop sore ulcers, turn in to the left and her toes curl underneath 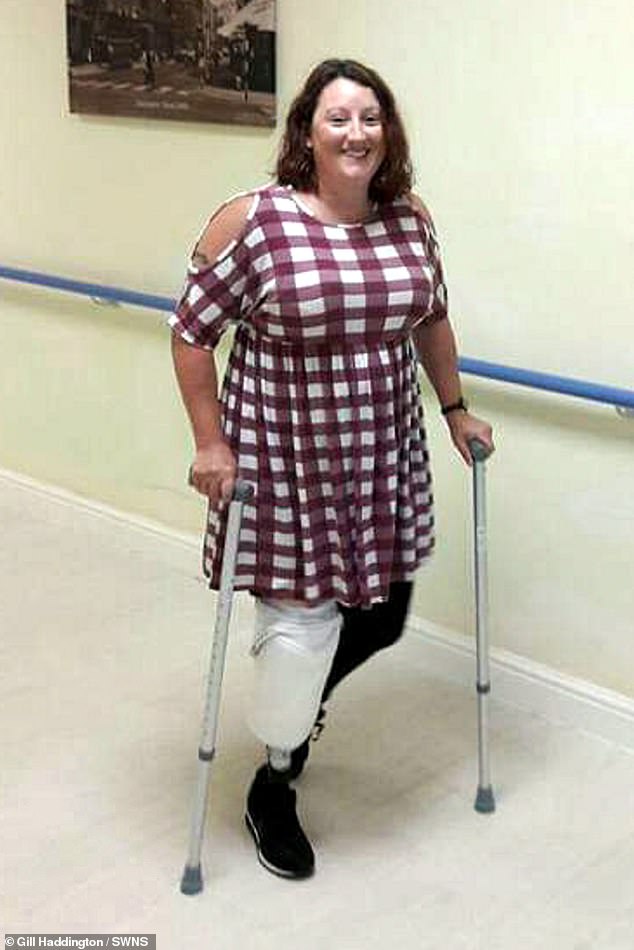 Eventually, after doctors recognised how miserable Ms Haddington’s life had become with the deformed foot, they removed her leg below the knee in May 2017. She got a prosthetic leg, which is pictured using for the first time in August 2017

Ms Haddington was getting ready, when she knocked the empty square-shaped bottle off a chest of drawers in her bedroom by accident.

She doesn’t remember the brand other than it being a cheap one.

She said: ‘When I first did it I cried out in pain, I lifted my foot to look at it and it hurt so much I couldn’t put it back down again.

‘Initially I thought I must have broken it – I wish I had.’

Ms Haddington was sent home from the hospital after X-rays and scans showed no break or injury and expected it to get better.

However, over time it got worse and her own GP suggested it could be due to Ms Haddington already suffering from fibromyalgia.

The condition causes pain all over the body, believed to be caused by abnormal levels of certain chemicals in the brain and messages communicated in the nervous system.

Ms Haddington also suffers with a back condition called degenerative disc disease and had stopped working in September 2014.

But this pain was more than Ms Haddington had ever endured before, and she then developed ulcers. 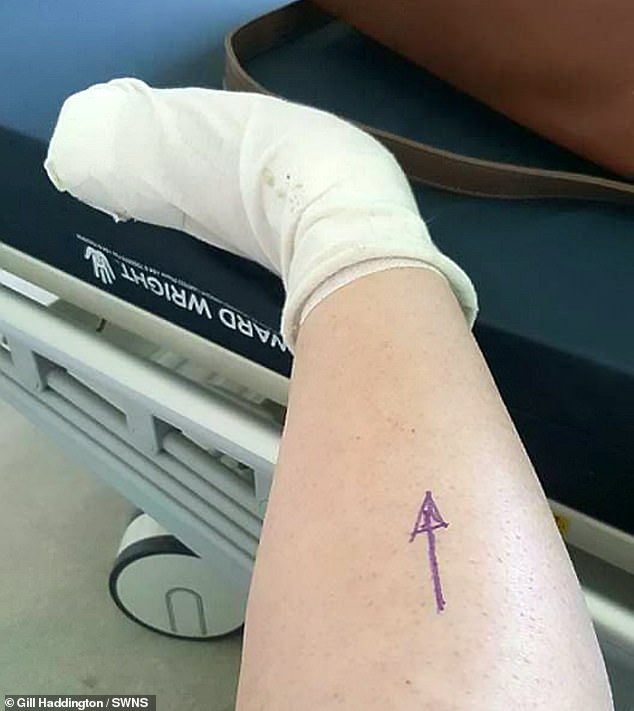 Ms Haddington initially thought she had broken her foot. Pictured, hours before the removal 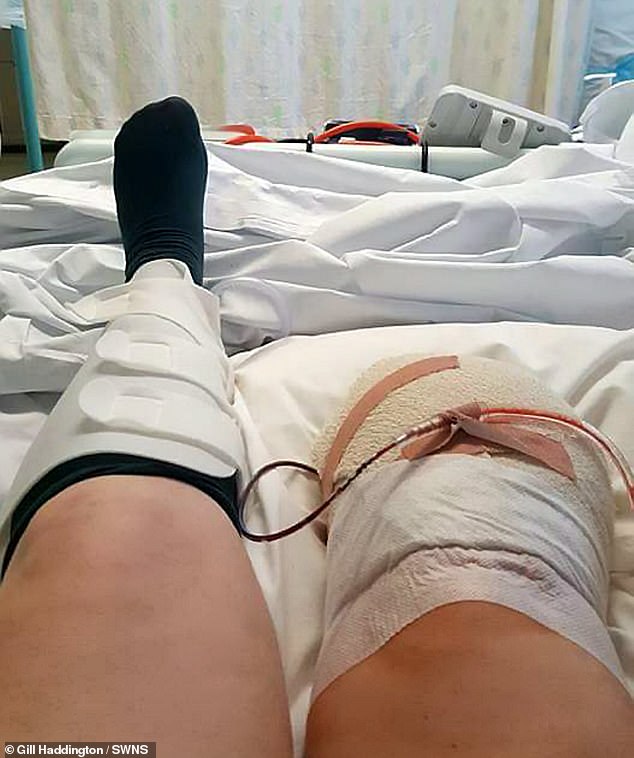 Ms Haddington was diagnosed with chronic regional pain syndrome in May 2016 – a condition where a person experiences persistent severe and debilitating pain. It is not clear what causes it, but it usually develops in one limb after an injury. Pictured, after the operation 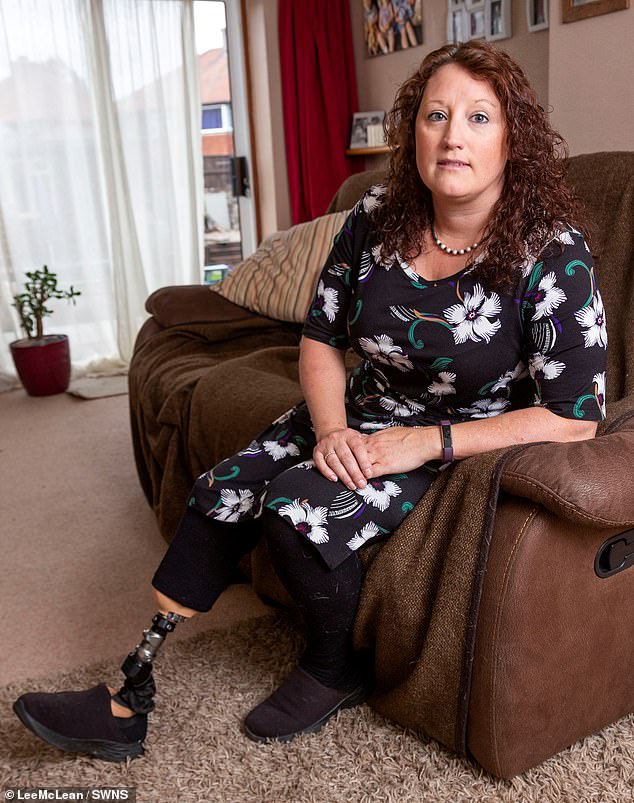 Ms Haddington had to stop working as a nursery nurse and had to rely on her daughters to care for her before she had her leg removed. Pictured at her home with her prosthetic leg

LIVING IN PAIN: WHAT IS CRPS?

The pain is often unconnected to the seriousness of the injury and can be out of all proportion from what the sufferer would expect.

The condition is little-understood, but some medical experts think it is caused by damage to the nervous system, which causes nerves to misfire in some way, triggering pain.

If left untreated the pain can spread to other parts of the body too.

Some sufferers have repeated episodes of pain followed by stretches of pain-free remission.

It can be treated by physiotherapy, to prevent muscle wasting, certain types of painkillers and counselling to help people cope with the chronic pain.

Symptoms include a burning sensation in the affected extremity; sensitivity to touch or cold; swelling; and changes in skin temperature, skin colour and skin texture.

Other common features of CRPS include poor coordination and muscle movement and most often fixed abnormal posture (called dystonia) and tremors or jerking of the limb.

Ms Haddington said: ‘All the while I was becoming a prisoner in my own home. I was in constant excruciating pain. I could not walk at all.’

Ms Haddington had to rely on family, including daughters, Natalie, 20, and Chloe, 18, to take her out for walks and cook for her.

She used a wheelchair and had a stair lift and wet room installed in her house to make life easier.

She said: ‘I don’t think I slept at all at that time. It hurt too much to be laid up in bed.

‘Instead I would sleep on the sofa with my foot propped on a box to keep it in position, any movement I made in the night would wake me.’

Sometimes the pain was so bad Ms Haddington’s partner, construction salesman Pete Nisbet, 61, would take her to the hospital for help.

Ms Haddington’s foot became increasingly deformed, turning in to the left and her toes curling under.

She was finally diagnosed with chronic regional pain syndrome in May 2016 – a condition where a person experiences persistent severe and debilitating pain.

CRPS usually develops in one limb after an injury, a surgery, a heart attack or a stroke, according to the National Organization for Rare Disorders (NORD).

Symptoms include a burning sensation in the affected extremity; sensitivity to touch or cold; swelling; and changes in skin temperature, skin colour and skin texture.

It is not clear what causes CRPS, which is not well-understood, but is believed to be due to the peripheral and central nervous systems being injured.

The NHS states the number of people affected are difficult to estimate. However in the US, there are fewer than 200,000 CRPS patients, affecting two to five per cent of people with peripheral nerve injuries, according to NORD.

Currently there is no known cure although there are a number of therapies used to manage symptoms including oral and topical pain relievers, nerve-blocking medications and behavioural management therapy.

Ms Haddington said: ‘I had already started talking about wanting my leg removed, but everyone couldn’t believe what I was saying. 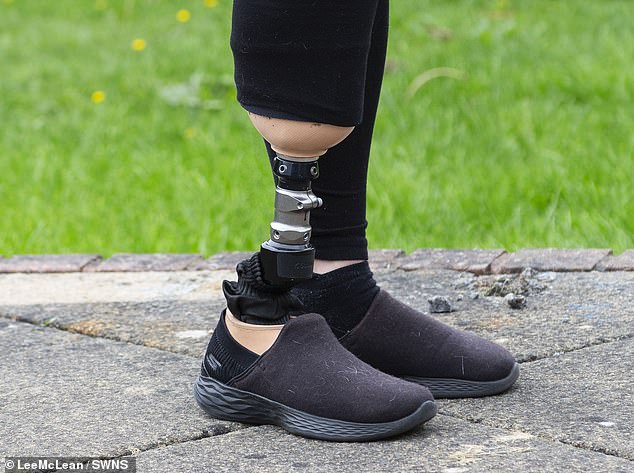 There is no cure for CRPS but some therapies manage the pain. The condition is dubbed ‘suicide disease’ because of how many people take their own lives following a diagnosis due to sheer pain. Pictured, Ms Haddington’s prosthetic foot 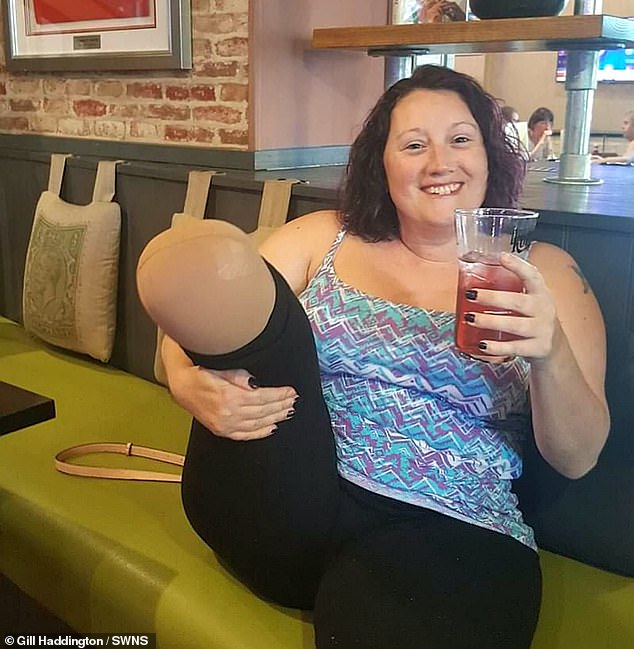 Ms Haddington hadn’t walked for three years because it was too painful. Pictured, at her local pub after the operation

‘My leg was already dead to me, it was the cause of so much pain and unhappiness and I just wanted to get on with my life.

‘I wanted to be able to walk again and to go swimming. I love open-air swimming.’

Ms Haddington was eventually referred to a specialist in February 2017 who she begged to remove her leg.

She said: ‘The specialist didn’t want to do it at first, but he saw how much pain I was in and he relented.

‘In a way, I am pleased the pain was so bad. He could see there was no turning back from what was happening to me. This was the only way out.’

Within four months Ms Haddington was in surgery at Royal Preston Hospital. Surgeons removed her leg in May 2017 from under her knee, to make ensure that she was left pain free.

Ms Haddington said: ‘As soon as I came round my partner said to me, “I can see I’ve got my Gill back”. I felt so happy.’

After months of being a wheelchair undergoing physio and aftercare, Ms Haddington got her first prosthetic leg in September 2017 and was beside herself with joy.

She said: ‘As soon as I got it I said to Pete, “let’s go for a walk”, and we walked along the promenade. It was wonderful to be up and about.

‘The prosthetic isn’t perfect but I love it so much, having my leg removed was the best thing I ever did. I don’t regret it at all.’

Eventually Ms Haddington felt well enough to return to her swimming, but said she doesn’t believe she will return to work due to her complex health.

She said: ‘I love swimming, I feel free when I swim, nothing hurts. It’s fantastic.’

She will swim one mile in the John West Great North Swim, at Brockhole-on-Windermere, in the Lake District, on Saturday 8 June for charity.

You can donate to her JustGiving page here. 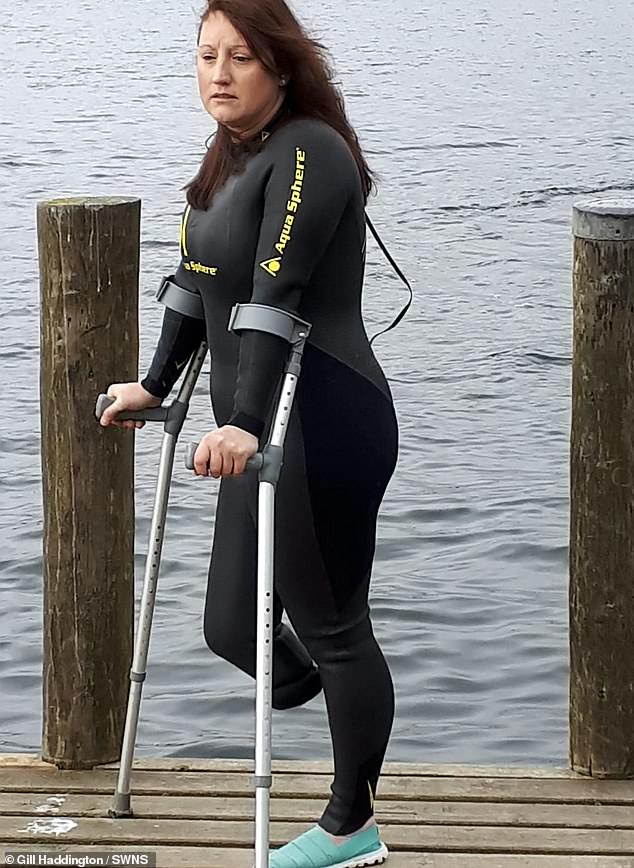 Ms Haddington felt well enough to return to her swimming which she enjoyed before her accident. Pictured at Lake Windemere this year

Paracetamol considered one of the ‘most dangerous medicines’ claims scientist

One in five people in England harmed by others’ drinking over past year: And nearly one in 20 of them experienced aggression, indicates largest survey of its kind

Bed bugs: The Cimex lectularius parasite may be hiding in your house